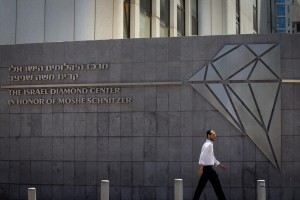 Security at the Israel Diamond Exchange in Ramat Gan is a high priority, and so it should not be surprising that the latest technology in biometric screening just made its debut there.

A screening system installed there by FST Biometrics is able to pick out identifying features of pre-enrolled people in a crowd, a camera records their face, their height, gait and other identifiers. Large crowds can walk past a checkpoint, and the system can immediately tell if anyone in the crowd should not be there.

FST Biometrics was initially inspired by the problems of the Israeli military in processing large numbers of people at its checkpoints.

Aharon Ze’evi-Farkash, the company founder, was head of the IDF Military Intelligence Directorate when one day he noticed thousands of Palestinians waiting in long lines to get through the Erez crossing between Gaza and Israel

“How many enemies are we creating for ourselves because we’re stopping 35,000 people to stop one bad person who might be a terrorist,” he thought to himself. There had to be a better way.

After leaving the army, he thought of the better way.

“We wanted it to be in real time, in motion, so people could just keep walking through,” FST Biometrics chief marketing officer Arie Melamed said.

An average person’s pocket or purse, Melamed said, is filled with outdated means of identification: keys, membership cards, credit cards, and so forth.

“You’re schlepping a lot of identification means,” he said. “Why? It doesn’t make any sense. If you can identify, in an accurate real time way, that the person who’s standing in front of you is the one you want to sell your goods to or give a discount to, it’s great.”

As for security applications, the technology faces a major drawback insofar as it relies on people being preregistered. Terrorists are not likely to pre-register for our convenience.

“If you want to look for people, for terrorists, there are other solutions,” Melamed said. “Our product is not designed for that purpose.”

However, a counter-terrorist adaptation might not be far off. Once identifying imagery becomes available on a known terrorist operative, it could be entered into the system.

Melamed acknowledged that FST is talking with certain governments about such applications, but they’re not there yet.

This article appeared in print on page 7 of the July 16th, 2015 edition of Hamodia.