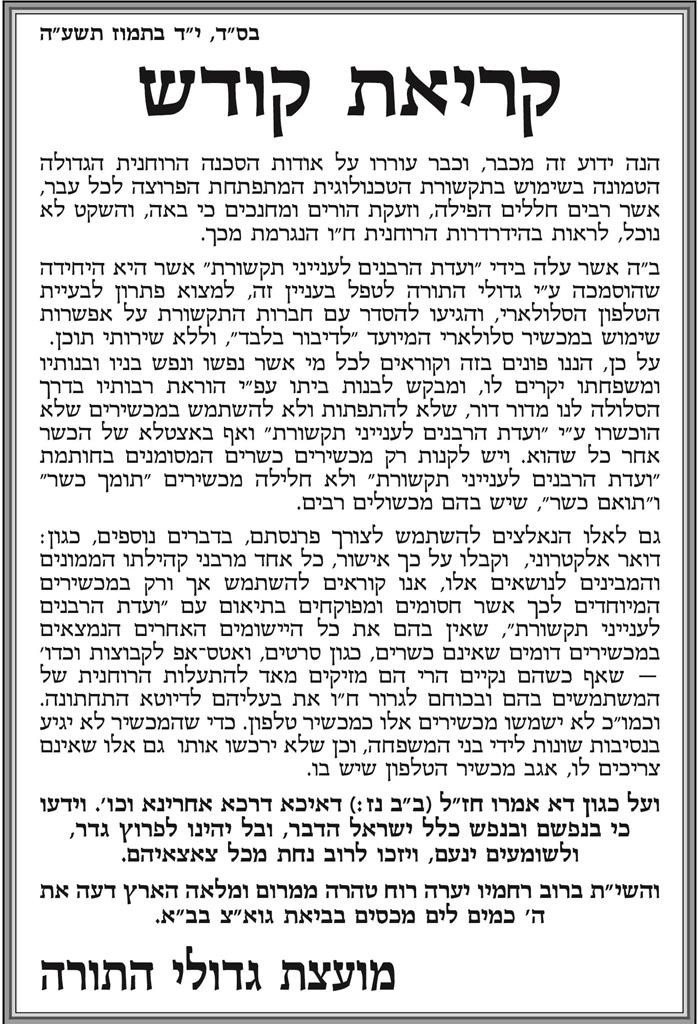 The Moetzes Gedolei HaTorah of Agudas Yisrael  in Eretz Yisrael convened in Yerushalayim Tuesday evening and issued a clear list of directives regarding the protection of frum homes from modern technology. This includes cellular phones, computers and the internet, which pose a spiritual risk to those who use it.

Other issues addressed at the meeting included taking a firm stance on the preservation of Shabbos and the campaign against Shabbos desecration in Ashdod.

The Gedolim reached clear, binding decisions in order to protect Klal Yisrael from these dangers. At the end of the meeting, the Moetzes published a Krias Kodesh, as well as a detailed list of rules.

The kol korei begins saying “It has long been known … that there is a tremendous spiritual danger inherent in using developing communications and technologies, which are open to all and which have claimed many victims. The cries of parents and teachers have come before us, and we cannot remain quiet when seeing the spiritual decline, chas v’shalom, that it causes…”

The kol korei and the list of rules also include guidelines for those who need to use technology for parnassah.

The list of rules and regulations released by the Moetzes follows::

Am Yisrael is unique in that it has the holy Torah, is a kingdom of Kohanim and has been instructed “kedoshim tihiyu — you shall be holy.”

Regrettably the internet, which contains every form of immodesty, heresy and false beliefs, has caused destruction in Jewish homes, where men and women, bachurim and girls, have declined, Rachmana litzlan, on a path that brings to the lowest abyss.

At such a time, it is incumbent upon us to stand in the breach and create boundaries, especially regarding matters of tznius and holiness, as it says, “Ushmartem es mishmarti” (Vayikra 18:30), and Chazal said in the Gemara (Yevamos 31a), “Asu mishmeres lemishmarti.” The Gemara (Shabbos 13a) says: “‘Go around the vineyard,’ people say to the nazir, so that he should not approach it, as a preventive measure.”

Following are the guidelines and regulations for the public of yireim and chareidim who fear the word of Hashem.

Every person in the chareidi community should not use internet in any form, even filtered and blocked internet, whether on a computer, a telephone or any other device, in any place.

Those who require use of part of the internet for their parnassah should ask a Rav who is appointed by the community to deal with these matters and who understands communications matters. If they receive permission, they should use only internet filtered and blocked by the finest filters. They should try mightily not to bring the internet into their homes in order to preserve the Jewish home, and to use it only at their place of work, or they should rent an office with several other chareidi Yidden who need the same thing.

Neither men nor women and girls should work in places where they will have to be in a room alone where there is a device with unfiltered internet.

A committee comprised of Rabbanim familiar with the communications and technical issues will be established. Their role will be to program computers at chareidi schools and businesses so that they should not enable any impure content. They will supervise the computers in these places to make sure they are suitably blocked. The schools and businesses will have to receive a hechsher for the computer systems in their possession from this committee.

These guidelines are not chumros or m’middas chassidus, they are an obligation according to the Torah on every person in Am Yisrael who fears the word of Hashem. Whoever does not accept these regulations and guidelines is transgressing severe elements of Torah, and is a poretz geder. One should avoid associating with him.

Chareidi education institutions for boys and girls should not admit students whose families have internet that does not meet these guidelines, or other technological devices that are not kosher. The principals have to stand firmly on this matter so that these students should not become bad influences on the rest of the school.

People who have internet that does not meet these guidelines, or other technological devices that are not kosher, are not suitable to serve as Rabbanim, educators, shochtim, mohalim, kashrus mashgichim, sofrim, magihim and the like. They should not be relied upon at all in matters of religion, kashrus and holy work.

Chareidi institutions should not hire in their offices people who have internet that is not in accordance with these guidelines, or who have nonkosher technological devices.

We daven that in the merit of our sanctifying ourselves on this world, and setting boundaries to enable the observance of Torah, Hashem should bestow upon us, in His great benevolence and mercy, a spirit of holiness from Above, and we should merit to see generations of children and grandchildren involved in Torah and mitzvos in purity, and may we merit the final Redemption speedily in our day.