Israel U.S. Veto on Palestinian State Not a Sure Thing
Israel 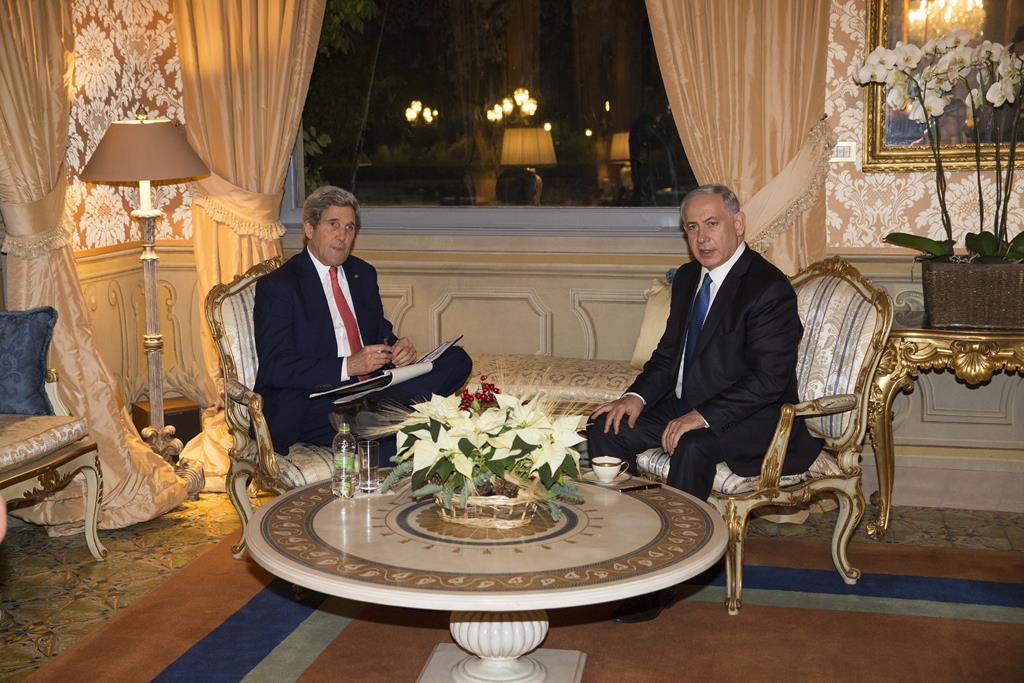 Israel said it hoped the United States would veto any moves at the United Nations to set a time frame for its withdrawal from territory Palestinians seek for a state, but a senior U.S. official said it was too early to say.

Secretary of State John Kerry met with Israeli Prime Minister Binyamin Netanyahu in Rome on Monday to discuss various proposals for a Palestinian state that are circulating at the United Nations.

The meeting, which lasted over two hours, was described by aides on both
sides as “correct but tense.”

Afterwards, Netanyahu said he told Kerry that Israel will “do everything possible” to make sure that the U.N. Security Council does not impose a solution on Israel, and that his country reserved “freedom of action” to repel both the Palestinian and French proposals in the Security Council.

Netanyahu spoke to French President Francois Hollande 10 days ago and, according to senior diplomatic sources, conveyed Israel’s strong opposition to their initiative, which is reportedly being backed by the Americans.

Asked if he left Rome feeling confident that the U.S. would use its veto to block a resolution detrimental to Israel, Netanyahu said that he was leaving Rome “like a person confident that what he had to say was heard.”

Later on Monday, Kerry was scheduled to travel to Paris for talks with European counterparts and then on to London to meet Palestinian chief negotiator Saeb Erekat and a delegation from the Arab League, who will urge the United States not to use its U.N. Security Council veto to block the proposals.

The hastily-arranged meetings suggested urgency in America’s drive to manage efforts among Security Council members to draft a new proposal before Israeli elections in March. Kerry said on Friday he wanted to defuse tensions during the talks.

A senior Western diplomat said the Europeans were aiming for a consensus resolution devising a binding, unspecified time frame and felt the Americans were now open to that possibility.

“There is a window of opportunity now, there is a willingness from them to consider … options at the Security Council,” the diplomat said.

But a senior State Department official said Washington had not yet decided that a Security Council resolution was the right way to go.

“These things are all very much in flux, it’s not as if we’re being asked to take a position on any particular Security Council resolution right now. It would be premature for us to discuss documents that are of uncertain status right now.”

A statement issued after a Palestinian leadership meeting convened by PA President Mahmoud Abbas in Ramallah said the resolution will be submitted to the U.N. Security Council after Kerry’s meeting with the Arab League delegation.

A Palestinian official who spoke to Reuters on condition of anonymity said the resolution will be presented on Wednesday.

If the United States pushes the Europeans to wait until after Israel’s elections, the Jordanians could put forward the Palestinian-drafted resolution for a vote in January. Netanyahu said the resolution and its two-year deadline were dangerous.

The U.S. official indicated Washington did not think the Palestinian draft was acceptable.

“The Palestinian draft through the Jordanians contains a hard deadline for the withdrawal from the Yehudah and Shomron of two years, so that is not the way we would look at handling a very complicated security negotiation by simply mandating a flat deadline of two years,” the official said.

For 47 years, Washington has opposed unilateral actions aimed at imposing a Palestinian state on Israel and there’s no reason to believe that policy will change now, a senior official in Netanyahu’s entourage told reporters on Monday on Netanyahu’s plane to Rome.