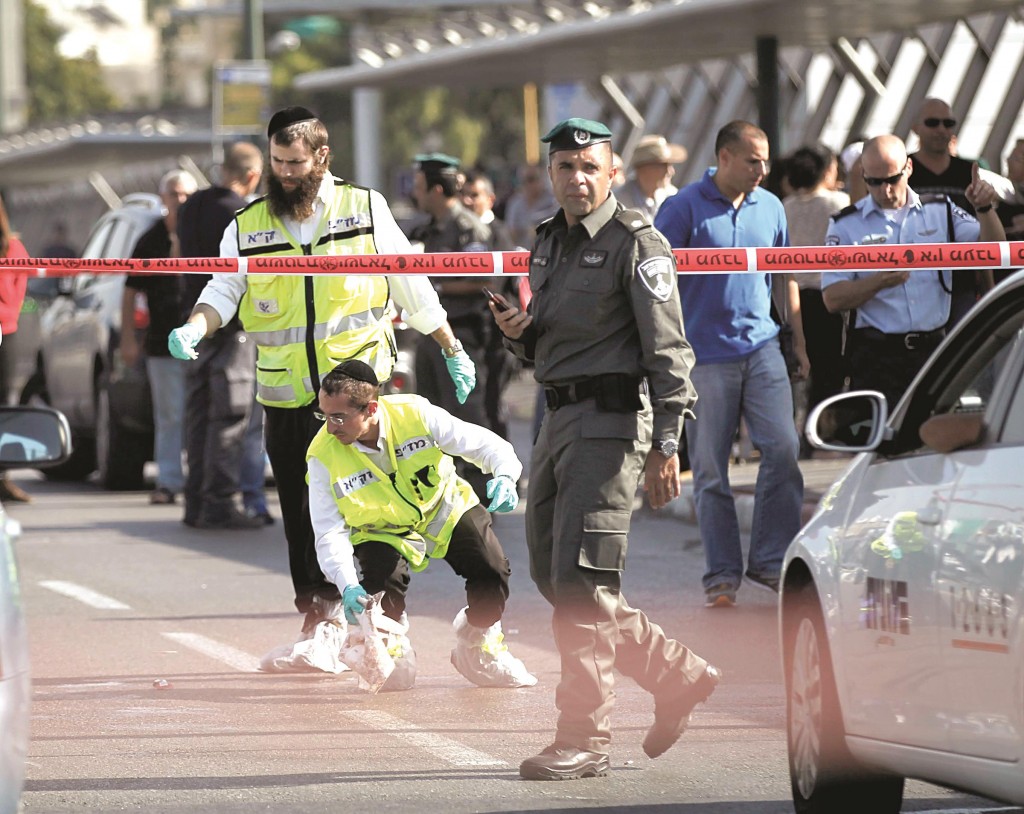 The Palestinian campaign of terror shifted on Monday from Yerushalayim to Tel Aviv and Gush Etzion as four Israelis were stabbed, two of whom were killed, in two incidents only hours apart.

Lemkus had been injured though not seriously in a terrorist attack eight years ago at the same location. Her father, a volunteer in Magen Dovid Adom, learned of the incident over the MDA communications network. He immediately tried calling his daughter, but to no avail, and verified his worst fears a short time later, Nana reported.

The attack occurred just a few yards from the site of the kidnapping of three Israeli teens — Eyal Yifrach, Naftali Frankel and Gilad Shaar, Hy”d,  — who were subsequently murdered last June.

The attack on Monday began as a failed hit-and-run when the vehicle was blocked by concrete barriers at a hitchiking spot. But the driver, later identified as Maher al-Hashlamun, didn’t give up on his mission of death. He sprang out of the vehicle and started stabbing anyone he could reach.

He was shot in the chest by Alon Shvut’s security guard, and was then taken to Ein Kerem in serious condition.

The two other victims were rushed to the Hadassah Medical Center in Yerushalayim’s Ein Kerem and Shaare Zedek Medical Centers. One of them, a man in his mid-20s, was stabbed in the stomach, suffering light-to-moderate wounds; the other, in his 50s, was lightly wounded. The latter was driving by when he saw the attack taking place and stopped and ran out of his car to intervene.

Hashlamun, 30, from Chevron, is a member of Islamic Jihad, which claimed responsibility for the attack. He was jailed in Israel from 2000—2005 after he was convicted of throwing Molotov cocktails at an IDF patrol.

In the day’s first attack, in the afternoon, a 20-year-old soldier, Almog Shiloni, Hy”d, from Modi’in, was stabbed by a Palestinian who had tried to grab his weapon at the Haganah train station in Tel Aviv. A struggle ensued in which he was wounded, and the soldier was evacuated in critical condition to Sheba Hospital in Tel HaShomer. He died of his wounds in the evening.

Two passersby, Gilad Goldman, in his 50s, and a friend, witnessed the attack and rushed to the soldier’s aid.

“I got out of my car and saw [the attacker] assaulting and stabbing the youth. I punched him in the face. He dropped the knife and began fleeing,” Goldman recounted to Ynet.

“We began to chase after him, screaming ‘terrorist!’ We saw that he was getting away quickly, so I went back to help treat the soldier and direct traffic so emergency personnel could arrive quicker. We waited a long time until the ambulance came.”

Magen David Adom personnel gave emergency aid to the badly wounded soldier and then evacuated him to hospital. They also treated two people on the scene for trauma.

Internal Security Minister Yitzhak Aharonovich arrived at the scene to an angry reception. Some people shouted at him, “Where is the security?” and “Death to terrorists!” as he passed by.

Security forces said there had been no prior warning of such an attack and that the assailant likely acted on his own.

Soon after, police arrested 18-year-old Nur al-Din Abu Khashiyeh about 200 yards from the scene of the crime. He was identified as a resident of Shechem staying in Israel illegally.

Yaakov Shamir, an officer from the Police Yasam unit, was among those who apprehended the suspect.
“We received a report about a soldier being stabbed and the suspect fled to Levanda Street,” he said.

“Together with a Border Police team we arrived at the street and bystanders showed us the building — Levanda 18 — into which the suspect fled,” Shamir said.

“We went up the stairs very slowly. We saw blood stains on the first floor and we continued to go up, until we saw the suspect lying on his back,” lightly wounded, he added.

At a meeting of his Likud Party shortly after the attack in Tel Aviv, he said he had told security forces to use all available means to bring the violence to a halt.

He also invited those dissatisfied with life in Israel to leave.

“To all those who are demonstrating and shouting their denunciation of Israel and support of a Palestinian state, I can say one simple thing: you are invited to move there — to the Palestinian Authority or to Gaza,” Netanyahu said.

“Believe me, we will put no difficulties in your path.”