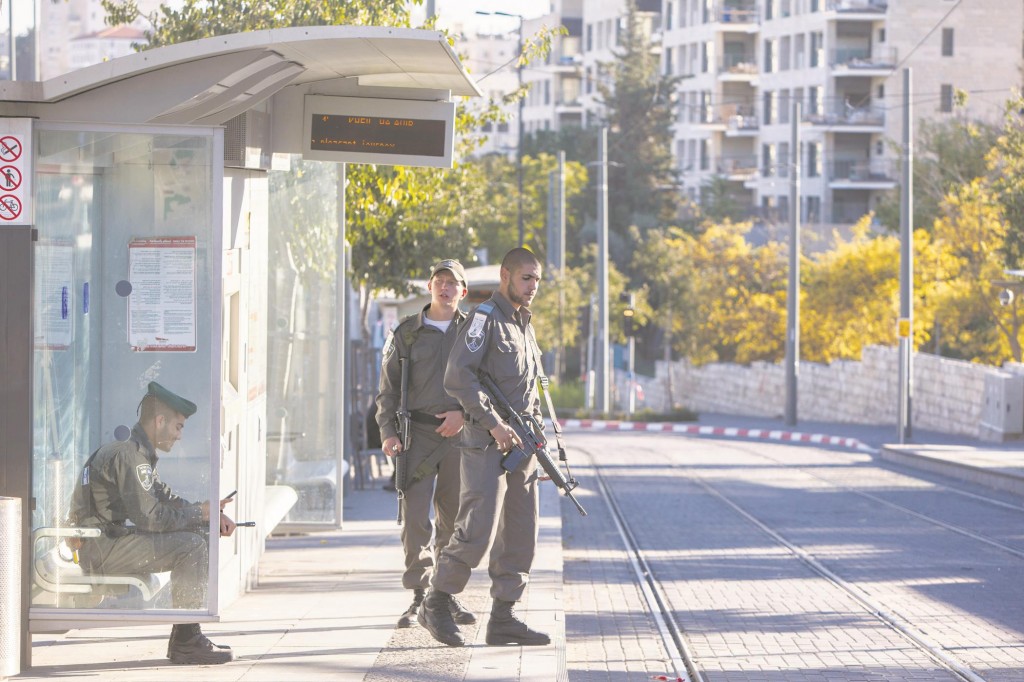 Israeli authorities are looking for new ways to curb the mayhem which has cast a pall over life in Yerushalayim in recent weeks, though doubts were already being expressed at the outset about their likely effectiveness.

Police on Thursday were setting up concrete barriers next to light-rail stations to prevent vehicles from entering passenger waiting areas and committing the kind of hit-and-run attack seen on Wednesday and two weeks earlier at almost the same location.

The barriers have so far been placed next to the station at Givat HaMivtar and were also designated for the Bar Lev route, where Wednesday’s attack occurred, as well as on Hayal Hahandasa, Yaffo Street and Herzl Boulevard.

Economy Minister Nafatali Bennett (Jewish Home) denounced the move as a “prize for terror,” saying it was no solution “to put Jews behind walls and concrete barriers, but rather to deter the murderers.”

But even those could not restore the sense of security to Yerushalayim, as many of the passengers withdrew to standing behind bus stations as a possible protection, throwing a worried glance around and nothing that “at least during the war there was a siren.”

Even the police seemed to concede that the barriers would not accomplish much. If terrorists can’t drive their cars into railway stations, they will simply change tactics.

Sources in the government were quoted admitting that said the roadblocks were not a solution but was something implemented due to pressure “from above.” More effective measures will take more time and will be more costly.

In addition to the roadblocks, 300 more policemen were deployed on the streets of the city on Thursday morning, bringing reinforcements to 1,300.

“There’s a feeling of fear. I take a bus from Pisgat Ze’ev to this stop and then I take the train, in order to avoid…passing through Shuafat … to avoid being pelted with stones. “Concrete roadblocks show we’re scared,” she added.

Other measures to counter the violence were legislative.

In view of the use lately of firecrackers as a weapon against policemen, some firecrackers have barred from import for 60 days. The ruling applies to “category 2” firecrackers, which are legal for use with licenses.

A more sweeping legislative answer was proposed by MK Shimon Ohayon (Yisrael Beitenu) on Thursday — revoking citizenship from anyone who committs or abets a terrorist act, belongs to a terrorist group or is a relative of someone in those categories. “This is an alternative to the absurd situation we are in, in which terrorists enjoy the privileges the State of Israel grants to its citizens,” he stated.

“The fight against terrorism must be comprehensive and extensive,” Ohayon said. “It is absurd that someone will continue having the rights of an Israeli citizen if they want to harm or kill us.”

“Nothing gets in their way, because they are free to move around anywhere in the country. This phenomenon leads Israeli citizens to lose their basic feeling of security,” he said.

In any case, disorders persisted on Thursday.

A number of masked youths threw stones and firecrackers at Border Police at the Shuafat refugee camp in eastern Yerushalayim. In eastern Yerushalayim’s a-Tur neighborhood on Thursday stone throwers caused damage to six cars and a bus. B’chasdei Shamayim, no one was injured in the incident.