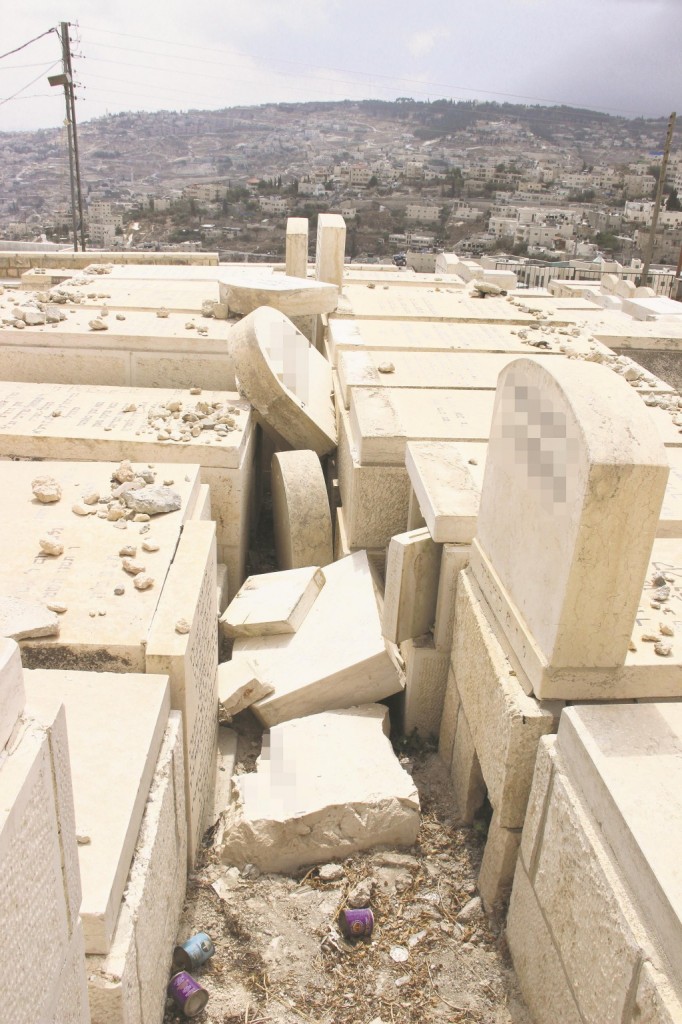 The destruction of 40 graves in the chelkah of Ger on Har Hazeisim during Rosh Hashanah was by all accounts part of an organized campaign of lawlessness that has spread throughout East Yerushalayim. It began with the large scale IDF operation in the aftermath of the kidnapping of the three yeshivah students and continued through the murder of the Arab youth and the Protective Edge campaign in Gaza. During this period, many mourners and visitors to Har Hazeisim were stoned, Molotov cocktails were thrown at the homes of some 100 families living across the street in the Maale Hazeitim development, attacks were rampant in Ir David, Har Hatzofim and even French Hill, and more than half of the cars of Jerusalem’s light rail were damaged, most as it passed through the Arab town of  Shuafat.

Yerushalayim’s Mayor Nir Barkat, who was accused of covering up what has become the latest Intifada in Yerushalayim to protect tourism in the city over the Yamim Tovim, finally broke his silence on Erev Yom Kippur. He blamed the violence on Minister for Public Security Yitzchak Aharanovich, who was already reeling from a growing police scandal and the resignation of Yossi Pariente, District Police Chief of  Yerushalayim. In a letter to the Prime Minister, Barkat stated: “Aharanovich did not provide enough tools. Our sense of security feels hurt. Since the murder of Muhammad Abu Khader and Operation Protective Edge, we have witnessed disturbing instances in Jerusalem that harm the confidence and sense of security of the residents of the Israeli capital city. If we do not stop the continuation in the deterioration of personal security in the Israeli capital city, we are likely to experience a phenomenon that will become a widespread threat to all of Israel.”

The incident on Har Hazeisim on Rosh Hashanah was very telling. According to eyewitness accounts, a dozen Arab youths first burnt the wires of cameras in the area near Ger, disabling the surveillance cameras that the government had invested nearly NIS 80 million into since 2010 at the behest of the International Committee for the Preservation of Har Hazeisim, headed by Avrohom Lubinsky. The thugs also disabled a camera installed by Gerrer Chassidim near the marah of the two Gerrer Rebbes, the Bais Yisrael and the Lev Simchah, zt”l. The destruction of the cameras was designed to deny Israeli officials and perhaps the world footage showing their rampage. The face-covered Arabs then meticulously destroyed grave after grave including that of the indefatigable Agudist leader Harav Yitzchak Meir Levine, zt”l. All this happened while a police van watched from across the road. While the police awaited instructions, the Arabs hacked away at the matzeivos. It was almost an hour later that police reinforcements arrived but instead of arresting the marauding youths, the police merely dispersed them. No arrests have been made to date.

Minister Aharanovich and the police keep saying they are “aware” of the situation and that the violence is actually waning. They point to some 800 arrests made since the disturbances began back in July, but informed sources say that most of the detainees were let go the same day, pointing to the lack of any meaningful enforcement in the city. Police officials have failed to provide accurate data on either the number of arrests or their ultimate dispositions to MK Miri Regev (Likud), chair of the Knesset’s Interior Committee, who has asked for the information  during at least  four meetings of her committee in the past year.

Several days before Rosh Hashanah, Mrs. Regev and other MKs along with high-ranking police officials toured Har Hazeisim. MK Yisroel Eichler (UTJ) took the lead in criticizing the police for the lax enforcement on the 3,000-year old beis hachaim. After the destruction in the Gerrer chelkah, MK Uri Maklev (UTJ) sent off a sharp letter to Chairwoman Regev requesting an urgent meeting of the Interior Committee despite the Knesset being on recess for the chagim. MK Maklev noted the violence is destroying “millions of shekels that were invested in the deployment of cameras and a police station.” Several other Knesset members also raised the issue of the lost investments on Har Hazeisim and in the light rail where 16 of 23 cars are out of service due to damage done by Arab rioters. Service remains suspended to the Palestinian neighborhoods of Al-Sahel, Shuafat, and Beit Hanina

Police contentions that  violence is declining are being sharply rebuffed by the residents of Maale Hazeitim, who say attacks are continuing and that Molotov cocktails were thrown on back porches in recent days. Many children are still traumatized by the attack against a school bus a week ago. The residents also say that a police van stationed at the nearby Ras-al-Amud Square is periodically assigned elsewhere leaving them exposed. Whenever the police leave, they say, the violence against them resumes.

Informed sources told the ICPHH  that the Intifada in Yerushalayim is organized by terrorist groups, some even pointing to local Hamas cells, who they say are actually paying the Arab youths for destroying the graves and the cameras. The fact that the violence has not spread to the West Bank, they say, is proof that a decision was made by terrorist organizations to focus the Intifada in East Yerushalayim.

Of course, all of this is unsettling to the International Committee for the Preservation of Har Hazeisim which had succeeded in the past four years to have the Government  restore 20,000 graves, install 137 cameras and open a police substation on Har Hazeisim. There was for many months a new sense of security there with few incidents of destroyed graves or rock throwing reported. The ICPHH was encouraged by a Cabinet decision in early summer approving NIS 300 million over the next three years to further upgrade security in East Yerushalayim, including Har Hazeisim. This would include the construction of Marchev Kedem, a police station for the entire East Yerushalayim area, the hiring of over 100 officers, the installation of an additional 150 high-tech cameras and more. The government also voted to introduce a bill to mandate jail sentences for rock throwers and even to reduce the age of a minor to 14, which would mean that anyone over the age of 14 would be charged as an adult.

Leaders  of the ICPHH met with leading Israeli officials during their visit to New York last week  by Prime Minister Benyomin Netanyahu. Cabinet Secretary Avichai Mandelblitt promised that the newly adopted Israeli plan for security (NIS 300 million) for East Yerushalayim, including Har Hazeisim, would be implemented in the near future. He said  that the government was committed to restoring order. Photos of the destruction on Har Hazeisim over Rosh Hashanah were given to Ari Harow, Chief of Staff of the PMO, who promised to share them with the Prime Minister. Natan Sharansky, head of the Jewish Agency, who was also visiting New York, said he had in the past supported completely fencing in Har Hazeisim and make it accessible “only to those who belong there.” Former U.S. Senator Joseph Lieberman expressed shock at the desecration on Har Hazeisim, especially since hundreds of American citizens are buried there and thousands of Jews visiting there.

Avrohom Lubinsky said that while disappointed with the recent setback, he was “hopeful that the master plan for Har Hazeisim would proceed as promised.” He noted that plans for the construction of 6500 new kevarim continue as are plans for a transportation hub and a multi-million dollar Visitor Center and shul. He supported Mayor Barkat’s contention that “unfortunately, the Minister for Public Security did not provide an example of the appropriate means of what is needed that we know will defeat the rioters.” Lubinsky echoed Barkat’s  call “for significant reinforcements of forces in the city to disperse the rioters in neighborhoods in the city, a significant increase in the intelligence system of the Jerusalem Police and stricter penalties for rioters to prevent what he called a “revolving door” in which rioters are released quickly. “The rock terror must end,” added Mr. Lubinsky, “and full security must be restored in Yerushalayim.”