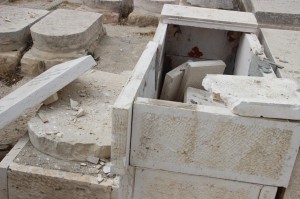 In one of the worst incidents of desecration in years, more than 40 graves were vandalized in the Kolel Polin Section of Har Hazeisim, just in front of the maarah where the Beis Yisrael and the Lev Simchah, two Rebbes of Gur, are interred. Dozens of masked and hooded Arab youths broke surveillance cameras on Friday afternoon, the second day of Rosh Hashanah, before turning their rampage on the matzeivos and graves nearby. Among the graves that were desecrated were those of Harav Yitzchok Meir Levin and Harav Shaul Moshe Zilberman, zt”l. Harav Levin was the legendary world Agudah leader for 60 years. Harav Zilberman was the great tzaddik and Gaon, known as the Vyereshever Rav.

According to Jews who live in the Maale Hazeitim development across the road, a police vehicle deployed nearby did not intervene until reinforcements arrived more than an hour later when they simply dispersed the Arab youths. Some of the matzeivos appeared to be smashed with sledgehammers while others were turned over in a scene that was reminiscent of some of the worst anti-Semitic acts on a Jewish cemetery.

Avrohom Lubinsky, Chairman of the International Committee for the Preservation of Har Hazeisim, called on Israeli Prime Minister Binyamin Netanyahu who is currently visiting the U.S. “to end the ongoing intifada in Yerushalyim which has now extended to the kedoshim buried on Har Hazeisim.” He said that the investment of tens of millions of shekalim over the past four years into security cameras and a police station is woefully inadequate at a time when local Arabs continue their lawless behavior in Yerushalayim. He pleaded with the Prime Minister to “allow the kedoshim “to rest in peace.” He added: “Even your ancestors are buried there.”

Meanwhile, plans are being made for a mass tefillah gathering at the site of the devastation on Tuesday September 30th at 4 p.m.

Mr. Lubinsky said that the security situation in eastern Yerushalayim has deteriorated significantly since the abduction and murder of the three yeshivah boys at the start of the summer. This, after four years of steady improvements including the installation of 137 surveillance cameras, many of which have now been vandalized. A new police substation was established but, of late, the station is poorly manned and often closed for days. A security detail deployed at the Ras al Amud Square is often pulled for other duty and when it leaves the post, incidents happen, including the stoning of a school bus last week, which terrified the young children.

Despite some 700 arrests in recent weeks, few of the hoodlums served any time and most were released the same day as minors. The government and Knesset have been slow to pass legislation mandating stiff sentences which is contributing to an atmosphere of the Wild West in eastern Yerushalayim, where 40,000 illegal structures have been built and where the chances of even receiving a traffic ticket are slim, leading some to wonder if Israel has given up on eastern Yerushalayim despite the rhetoric of a “united Yerushalyim.”

In New York, the ICPHH is hoping to meet with visiting Israeli officials to register their protest.

The Rosh Hashanah desecration on Har Hazeisim has shaken many in Eretz Yisroel who feel that not enough is being done to secure the oldest and holiest beis hachaim in Judaism.

This article appeared in print on page 1 of the September 29th, 2014 edition of Hamodia.