Israel My Trip to Israel
Israel 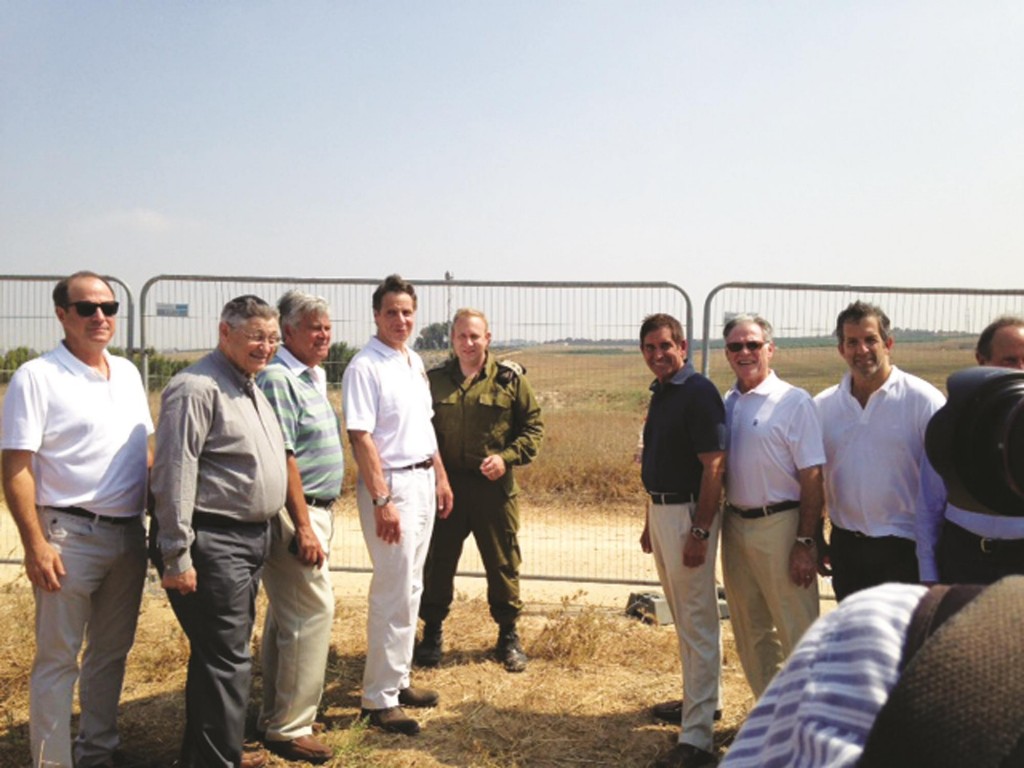 Last week, the leaders of New York State’s government sent a clear message of support for Israel’s right to defend itself against brutal terrorist attacks by Hamas. I was proud to be a part of the state’s Unity Delegation that traveled to Israel for an intense and fascinating 26-hour tour to get a first-hand look at this critical moment in Israel’s history.

Our delegation included myself, Governor Andrew Cuomo, Assembly Speaker Sheldon Silver, and Senate Co-Leader Jeff Klein. During our visit, we met with Israel’s top government and military leaders; saw the key defense components of Operation Protective Edge; entered a terrorist infiltration tunnel; and heard from Israeli citizens impacted by the fighting. Together, the delegation members reaffirmed our commitment to stand with Israel in solidarity.

This was my third trip to Israel and, as always, the Israeli people and the country’s leaders were gracious and welcoming. From the moment the delegation boarded our flight, I was overwhelmed as many people came up to me to just say that they appreciated the delegation’s understanding of what Israel is going through right now.

Shortly after the delegation arrived, we had the great honor of meeting with Israeli Prime Minister Benjamin Netanyahu, who thanked our New York delegation for “standing clearly with Israel, representing the American people and the people of the state of New York.”

In a separate meeting, Israeli Defense Minister Moshe Yaalon explained the Iron Dome defense system that protects the country from Hamas missile attacks. Hamas has fired more than 3,000 missiles at Israel. Often the missiles are launched from locations in Gaza where civilians are used as human shields. The delegation saw footage of their missiles being launched from hospitals and schools.

Delegation members visited an Iron Dome site, a small, mobile arsenal made up of a radar unit and several launchers. The unit is actually located in a field, rather than at a military base. Lt. Colonel Peter Lerner of the Israel Defense Forces briefed us on Iron Dome capabilities and strategic importance, explaining that Hamas missiles have the capability of quickly striking any part of Israel in less than a minute, and Israel has to be ready to react quickly to protect citizens.

It is frightening to think about living your life, knowing you are under the constant threat of a terrorist missile attack and that, at any moment, you and your family would have less than 60 seconds to get to a shelter or be killed. Yet, the people of Israel live with this threat every day.

During our visit to the Iron Dome battery, and also during a tour of a Hamas-built infiltration tunnel, our delegation was within only a mile or two of the Gaza border, and we were told that if a missile was released, we would have to get out of the bus and lie on the ground.

I was very pleased that former Israeli Prime Minister and former President Shimon Peres joined us for a tour of the tunnel. I previously met Mr. Peres during my first visit to Israel in 1986. Mr. Peres is now 92 years old, and he thought it was critically important that we see what is happening in Israel.

Prior to this tour, I imagined that the tunnels were crude structures in which you’d have to get down on the ground and crawl to get into.

However, these are not small, dirt tunnels, but rather large, sophisticated cement tunnels that included electricity. The tunnels, stretching from Gaza to Israel, enabled Hamas to enter the country to commit terrorist acts.

One of the most important commodities to Hamas is the cement used to build the tunnels. They spent millions of dollars to build tunnels to kill people, rather than spending that money to build hospitals, infrastructure, and schools. That clearly illustrates the mindset of Israel’s enemy.

Hamas considers both Israel and the United States as enemies. That is why it is so important that we remain vigilant and continue to invest in our homeland security to protect ourselves, just as Israel is protecting itself today.

Delegation members also learned about some of the procedures Israel uses to protect civilian citizens in Gaza. We were fortunate to be able to listen in as a pilot communicating with people in Israel was being told to abort a mission.

As I traveled in Israel, I was also struck by the youth of the Israeli army. The soldiers we saw and spoke with were very professional and well-trained. These young people are truly dedicated to the protection of Israel.

Our unity trip also included meetings with Israeli President Reuven Rivlin and United States Ambassador to Israel Daniel B. Shapiro, as well as a visit to the Western Wall with Jerusalem Mayor Nir Barkat.

The New York unity delegation traveled to Israel bringing words of encouragement that reflect our shared values. We came home with a better awareness of the threats facing Israel and how the country is protecting itself, as well as an even greater appreciation for the strong ties between our two nations.

I sincerely hope that other nations around the world recognize the lethal danger posed by Hamas terrorists, not only to Israelis, but to the people of Gaza, and that people understand that this constant threat to peace necessitates a response by Israel.

Our delegation felt strongly that it was important to show support and stand together with our nation’s closest ally in a time of war. As countless others have done, I left a prayer for peace in the Western Wall.

Peace for Israel, peace for the United States, and for the world.