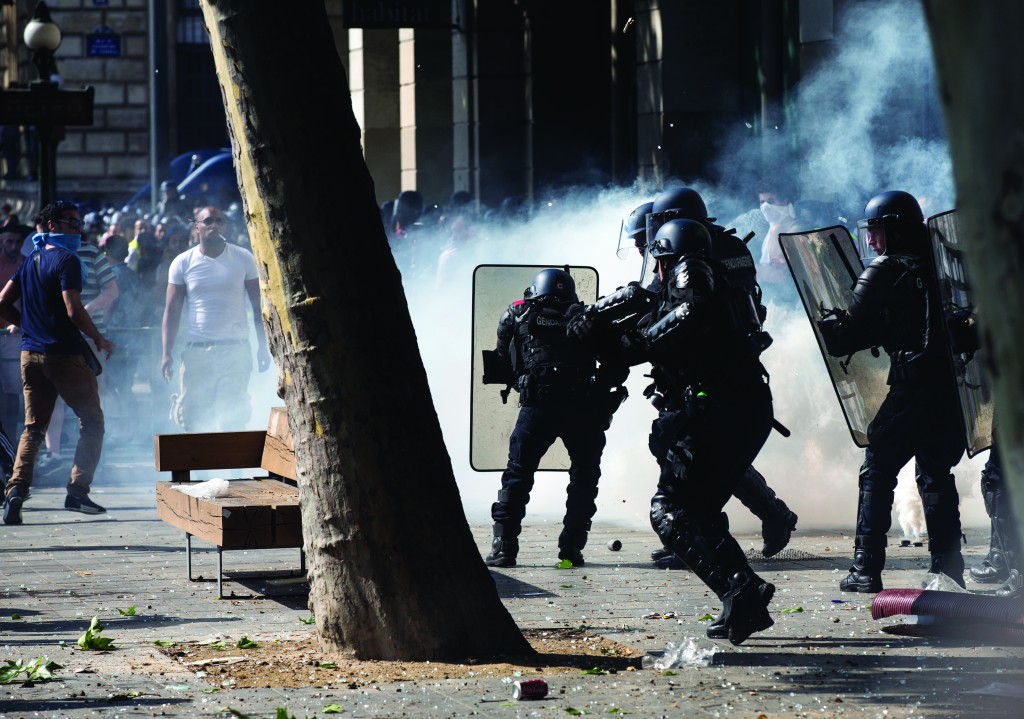 “Saturday’s protest ended in violence,” Simone Rodan, Director of the American Jewish Committee’s Paris office told Hamodia, in reference to the most recent pro-Hamas demonstration held in defiance of a government ban.   “Swastikas were spray painted on the Palace de Republique [the site of the gathering], police were attacked, and over 60 people were arrested.”

French interior minister Bernard Cazeneuve had warned organizers that they would be held responsible for any clashes and could be prosecuted for ignoring a ban that was authorized by the country’s top administrative court.

Some protesters, NGOs and even ruling Socialist politicians have criticized the bans on the rallies as counter-productive.

Cazeneuve noted that over the last two weeks, five marches had been banned, out of about 300 such protests across the country.

“Freedom of protest was thus the rule, and bans the exception,” he said

On the subject of how the French public viewed the matter, Rodan said that two polls showed that about “60% supported the ban on protests and widespread indifference about the Gaza conflict itself.”

French authorities had banned such protests after two such events had ended in vandalism of Jewish shops and riots around Synagogues and Jewish homes.  A demonstration, that was permitted last Wednesday, was attended by an estimated 15,000 people remained non-violent, but was marred by anti-Semitic caricatures and a group that attempted to enter the Maris [Paris’ old Jewish quarter].  This group was promptly arrested as authorities clearly stipulated that, in light of what has occurred the week before, the demonstration would not be allowed near any Jewish sites.

Rodan explained the reasoning behind the government’s decisions regarding the two most recent protests.

“Wednesday’s protest was organized by Unions and traditional left wing and pro-Palestinian groups.  The one on Saturday was lead by more radical Islamist elements and the far-left Anti-Capitalist Party [NRP].”   “These were the same organizers that had led the violent demonstrations two weeks ago. The government felt that they could not guarantee public order and that violence would result.”

Despite violence, a strong presence by civilian and military police effectively closed off Jewish neighborhoods.

The French government has been strong and consistent of their condemnation of anti-Semitism.  “Our Prime Minister is wonderful,” said Meir Habib a member of the French parliament in a conversation with Hamodia.  “In the parliament there was a standing ovation in support of unequivocal condemnation of anti-Semitism.  There is an understanding that this is a problem not only for Jews, but for France.

Fear of anti-Semitism from the far-right in France has been a concern since the rise of Jean-Marie Le Pen’s National Front, 15 years ago. Habib said that while he continues to view Le Pen [a reference to the founder’s daughter, who now leads the party] as “purely anti-Semitic,” the immediate threat is presently from the left.

“The NRP is not driven by humanitarianism,” said Habib.  “200,000 people have been killed in Syria and nobody said anything; they are simply anti-Jewish.”

A more frightening picture was drawn by Levi Matusof, who serves as a liaison of the French Jewish community to the European parliament in Brussels.

“A member of parliament showed me evidence that there is a convergence between the far-right and left,” said Matusof of the overlapping agendas of the divergent groups.

Rodan fully concurred with this grim assessment, citing a conference held in Paris this past Shabbos to discuss the Gaza conflict.  It was co-chaired by Laurent Louis, an openly anti-Semitic right-wing Belgian politician, and M’bala  Dieudonné, an African-born comedian and activist noted for controversial anti-Jewish remarks. Rodan reported that several groups that joined the banned protest came directly from this conference. She assessed that the ability of such parties to work together reveals that both are “driven more by anti-Semitism than ideology.”

Rodan said that the strife the France is experiencing did not occur “overnight,” but has been an issue for “over 14 years.” Rather it is the result of “radicalism and deep rooted anti-Semitism.”

“We are very grateful to the government for their support and understand that they are taking serious risks in taking the line that they have,” said Rodan.  “However, the government now needs a concrete plan of how to combat this trend and defend for the very values that France and Europe stand for.  Hopefully this will be a wakeup call for them.”

(With reporting by Reuters)