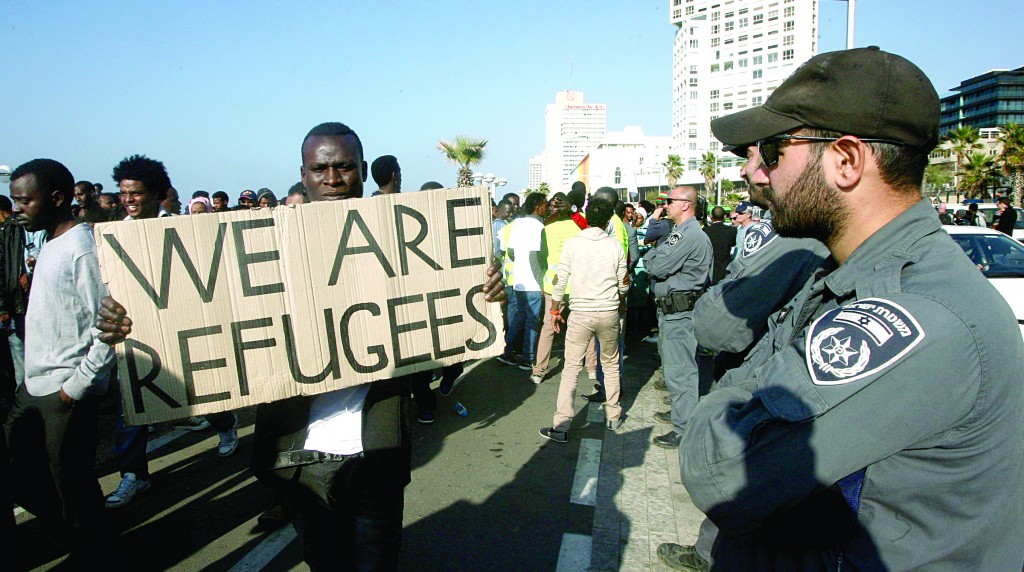 Thousands of African migrants raised the profile of their protest over Israeli detention policy on Monday as they marched up to the embassies of the United States and European countries in Tel Aviv to demand asylum and work rights from the government.

It was the second day of massive demonstrations, with crowd estimates over 10,000.

While the migrants claim to be refugees from danger and persecution in their home countries of Eritrea and Sudan, the Israeli government says they are mostly economic refugees.

“Demonstrations won’t help them,” Prime Minister Binyamin Netanyahu told members of his Likud party on Monday. “These aren’t refugees, who we treat according to international norms. These are illegal infiltrators seeking work.”

“We arrived in Israel seeking asylum and we want the Israeli government to check our asylum request in a transparent way,” he told the station in perfect Hebrew. “They should grant us basic rights until we can return to our countries,” he said.

But Tel Aviv Deputy Mayor Arnon Giladi told the station that the migrants crossed into Israel through Egypt, making that country responsible for granting asylum status. He said they arrived in Israel for financial reasons.

“They are not refugees,” Giladi said. “They are economic migrants, they are not more than that.”

The migrants, along with their supporters from Israeli rights groups and others, gathered outside the U.S. Embassy near the Tel Aviv promenade on Monday. Some waved their national flags while others carried homemade cardboard signs reading, “freedom, not prison,” and “nobody chooses to be a refugee.”

The migrants are planning to deliver letters to the diplomats in hopes of gaining foreign support for their cause, The Associated Press reported.

Their itinerary included the embassies of the United States, Canada, France, Germany, Sweden, Italy, Britain, Ethiopia, and the U.N. High Commissioner for Refugees.