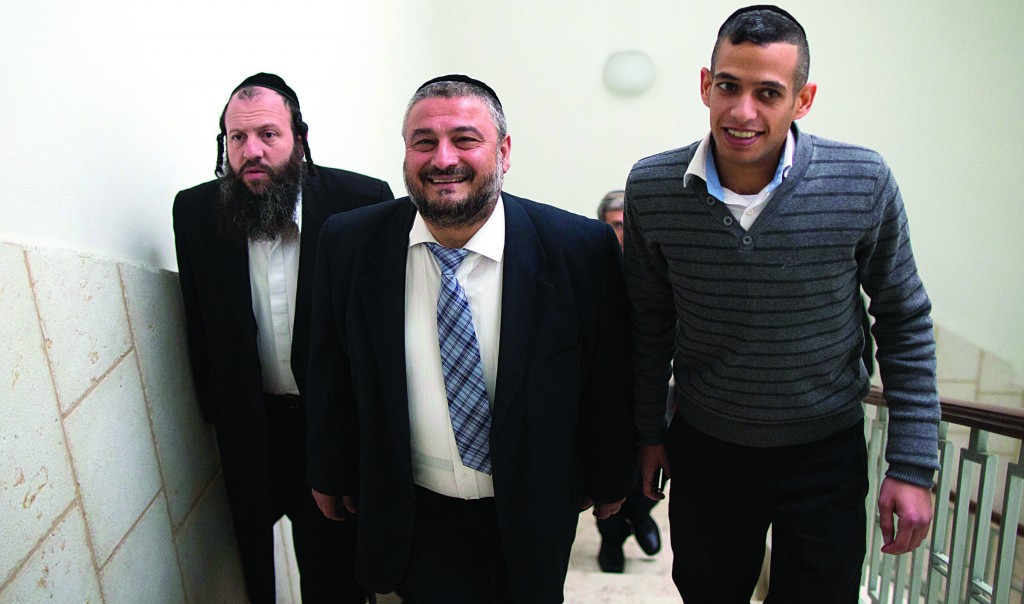 The Yerushalayim District Court canceled the recent municipal election results in Beit Shemesh due to allegations of electoral fraud made by the losing candidate and the Attorney General, a ruling decried by chareidi representatives as a travesty of justice and a capitulation to media pressure.

The election result two months ago, which returned Mayor Moshe Abutbul (Shas) to a second term in office, has been contested by Eli Cohen, the candidate backed by Yesh Atid and Jewish Home, in a campaign which has caused bitter divisions in Beit Shemesh and has been characterized by widespread harassment and intimidation of Abutbul’s supporters and their families.

Abutbul said on Thursday that he intended to appeal the verdict to the High Court after studying it with his legal advisors. But, he added, even if there must be a new election, he is confident that the majority of Beit Shemesh voters would again vote for him.

In the meantime, he expressed his appreciation for the solid support of all the chareidi MKs who called him immediately after the court ruling, and declared their support for him in their public statements.

The court determined that a new election must be held, even though Abutbul’s margin of victory was 956, and the number of alleged fraudulent votes amounted to only 36, not nearly enough to have altered the results. The judges cited in their decision “systematic” forgery of voter identification documents which “damaged the democratic purity” of the elections.

They stressed in the decision that though police looked into the matter, they found no hint that Abutbul was personally involved or had any knowledge of any forgeries.

Attorney Yaakov Weinroth, who represented Abutbul, had dismissed the state and Cohen’s claims, saying that “this case is about evidence, not intuition.” He said that “there is no real evidence in this case,” calling the state’s evidence “hearsay” and a string of rumors that could not prove anything in a courtroom.

The judges agreed with Weinroth’s assessment that no proof was presented that is acceptable in a criminal court case. Nevertheless they wrote that because the process was an administrative one and not a criminal one, the bar of proof does not have to be that high and if it seems that there was a system of forgery, it is enough to cancel the entire poll.

According to the law, Interior Minister Gideon Saar will set the date for new elections, within 30 days either from Thursday’s decision or from the end of any appeal. Should Abutbul or any City Council members choose to appeal to the High Court, they have 14 days to do so. The elections will be held for both mayor and the city council, and all the people and lists that stood in the election will appear again in the ballot box. No changes can be made to the lists and those who moved to the city or became 17 in the interim cannot be added to the voters’ registrar.

The tension in Beit Shemesh since the election has been the subject of great media attention, and chareidi MKs noted that the public opinion as presented in the media was one-sided.

It was striking that shortly after the court announced its decision in the Beit Shemesh case, the regional court in Haifa made known its decision to reject a petition for a new election in Maalot-Tarshiha despite strong evidence of vote rigging in those elections. A long list of irregularites there included bribery, forged ballots, unsigned vote tallies, uncounted ballots and more. Of course, in that case, a chareidi victory was not at issue…

Also in Natzeret, a court ordered the recounting of 47 questionable ballots, but did not call for a revote, as it did in Beit Shemesh. Again, chareidi candidates were not involved.

“I am saddened by the fact that the honorable court decided to follow a media campaign and cancelled the democratic decision of the residents of Beit Shemesh,” said Shas Chairman Aryeh Deri.

Deri expressed confidence that Abutbul would be victorious again in the revote, “and by a larger margin.”

MK Rabbi Yaakov Litzman (UTJ) said the court’s decision dealt a “mortal blow” to Israeli democracy. “It is lamentable that in 2013, the Israeli legal system is driven by media pressure,” Litzman said.

UTJ Chairman, MK Menachem Eliezer Mozes, said that the court ruling “smells of surrendering to the media,” and MK Uri Maklev (UTJ) called the ruling “unprecedented, corrupt and racist, with no legal basis.”

Should there be another election, the outcome cannot be taken for granted. According to Yaakov Reinitz, who covered the elections for the Hebrew Hamodia, the chareidi voters are expected to vote for Abutbul again. A third candidate, Meir Bila’ish, garnered 546 votes, which indirectly helped Abutbul. He is expected to get their vote again, as it is an organized group of supporters.

The question remains about the supporters Abutbul had in the “old city” of Beit Shemesh, the non-chareidi precincts, where he had 20% of the vote. Part of that support are the original Shas voters in the Sephardi town, which are expected to stay with him. However, he had a significant amount of secular support as well, and there is reason to believe that the intervening weeks since the election have influenced public opinion. In the interim, the air was filled with accusations and smears. A police investigation was opened after Abutbul supporters complained of harassment from their neighbors and that their children were teased in school. If only 500 of these votes would swing to Eli Cohen, Abutbol would be denied his victory.

Perhaps a ray of hope for Abutbul is that on Thursday night, amid declarations of victory and predictions of a mass rally of thousands for Cohen in Beit Shemesh, only 200-300 people showed up. One secular reporter at the scene questioned if perhaps the secular voters were not as involved and interested in another round of elections as those politically involved. If it is a harbinger for things to come, Mayor Abutbul’s chances of remaining Mayor Abutbul may indeed be good.