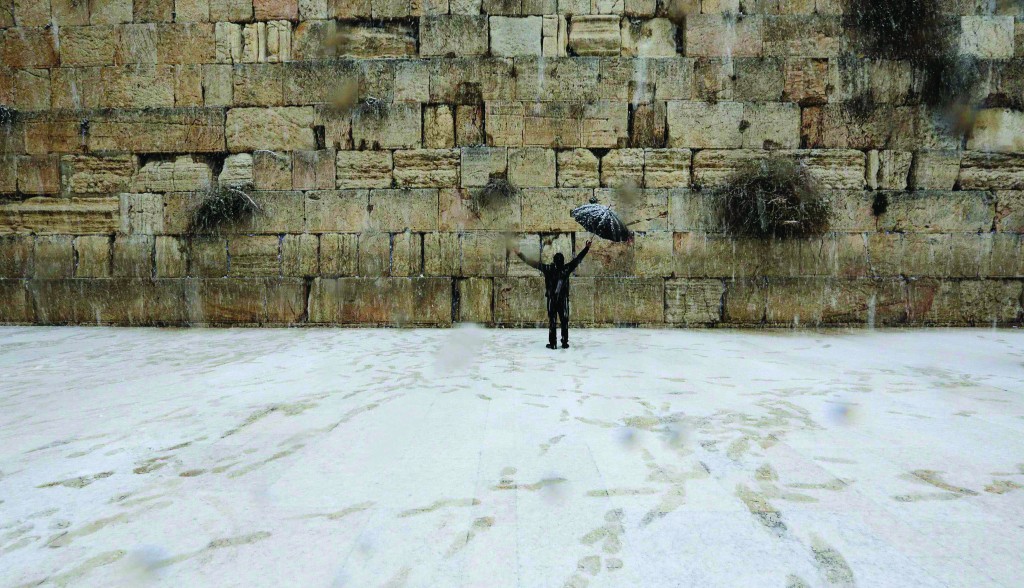 The snow and rain predicted for Yerushalayim and other parts of the country crystallized on Thursday, forcing school closures, shutting down bus lines, knocking out power for tens of thousands and providing delight for children of all ages.

Diplomacy was affected as well, as Secretary of State John Kerry’s scheduled meeting with President Shimon Peres and Prime Minister Binyamin Netanyahu was postponed due to the weather, American sources told The Jerusalem Post.

In the capital, schools canceled classes, and buses into and out of the city were not operating. Palm and cypress trees were blanketed with snow. Some revelers threw snowballs along the walls of the Old City, while others built a snowman across from a U.S. Consulate building, The Associated Press reported.

By midafternoon, the snow had turned to a cold rain, leaving streets slippery with slush.

At 11 a.m., the Egged bus company reported shutdown of all lines to and from Yerushalayim, as well as city bus operations within the city. Direct lines to and from Haifa, Tel Aviv, Ashkelon and other destinations ceased running due to hazardous conditions.

Over 25,000 Israelis were without power due to the storm, the Israel Electric Company told Israel Radio on Thursday. IEC customers in Be’er Sheva, Arad, and Ein Gedi were disconnected from the electric grid.

In the 24 hours before 7 a.m. Thursday morning, 4 inches of rain had fallen in Yerushalayim, 1.4 inches in Tel Aviv, and 2 inches in Haifa; only .6 inches fell in the Kinneret region.

In the Gaza Strip on Thursday, more than 30 people were injured because of car crashes and as poorly built homes collapsed in the icy rain, Reuters reported.

The stormy weather is expected to continue through Friday with the possibility of snow spreading to the Negev heights.