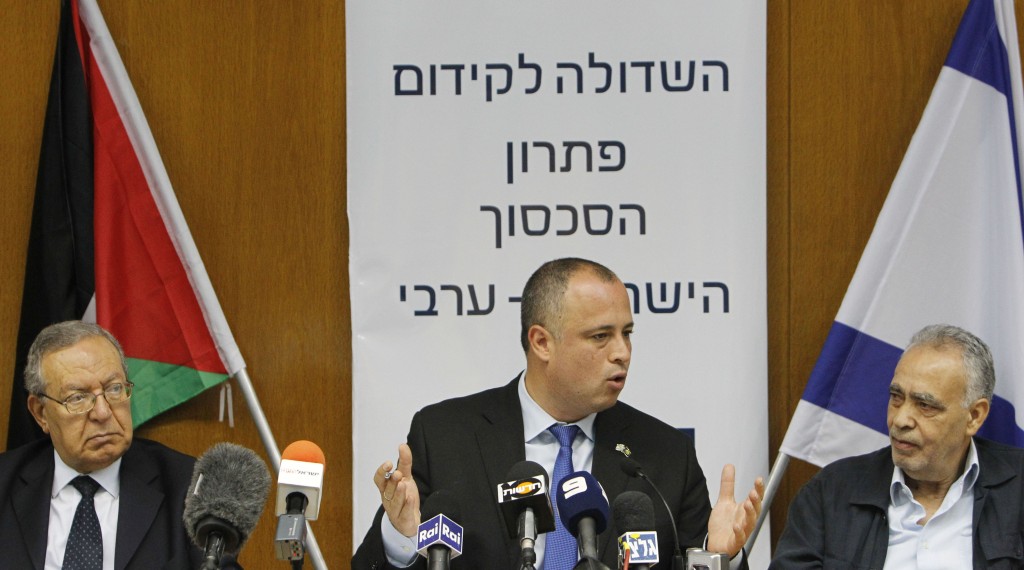 Thirty members of the Knesset turned out on Wednesday to show that Justice Minister Tzipi Livni isn’t the only one eager to partner for peace with the Palestinians.

With the Palestinian flag on display in the Knesset, Israeli and Palestinian officials met at the Knesset’s Caucus on Ending the Israeli-Arab conflict.

The “unprecedented” meeting will launch, according to Bar, “political, civil and social ties between the two sides. This meeting is a signal and a message of … unequivocal backing [for] negotiators from both sides against all those who would try to sabotage the negotiations and the two-state solution.”

The flying of a Palestinian flag at the Knesset is not unprecedented. In July 1999, then-Knesset speaker Avraham Burg hosted his Palestinian counterpart Ahmed Qurei, and numerous Palestinian flags adorned Israel’s parliament building.

Whether the Palestinians will reciprocate by flying an Israeli flag in Ramallah when the MKs visit there remains uncertain.

Mohammed Madani, a former Palestinian parliament member who was appointed by Abbas to head a new Palestinian Committee for Interaction with Israeli Society, said it would.

“It is logical that since you put up a Palestinian flag when we came here that when you come to our parliament, there will be an Israeli flag,” Madani told the MKs in response to a question from The Jerusalem Post during the meeting.

But veteran Palestinian journalist Elias Zananiri, who is also on the committee appointed by Abbas, said he did not believe the Israeli flag will fly in Ramallah until a peace agreement is reached.

“For us, it’s a flag of occupation, so it would be hard to believe that an Israeli flag will fly in Ramallah in two or three weeks when you come,” Zananiri said. “Let us have a state with a flag and we won’t have any problem waving yours throughout our state.”

Among the MKs who participated were Shas MK Yitzchak Cohen and ministers Yael German and Amir Peretz from Yesh Atid and Movement. Likud-Beitenu and Jewish Home were not represented.

Meanwhile, on Wednesday, Livni told Army Radio that all coalition partners were obligated to support the negotiations.

Likud MK Miri Regev told Israel Radio on Wednesday that supporters of the two-state solution were in the minority in her party. Jewish Home leader Naftali Bennett and Yisrael Beiteinu chief Avigdor Lieberman have recently been dismissive of prospects for a peace settlement.