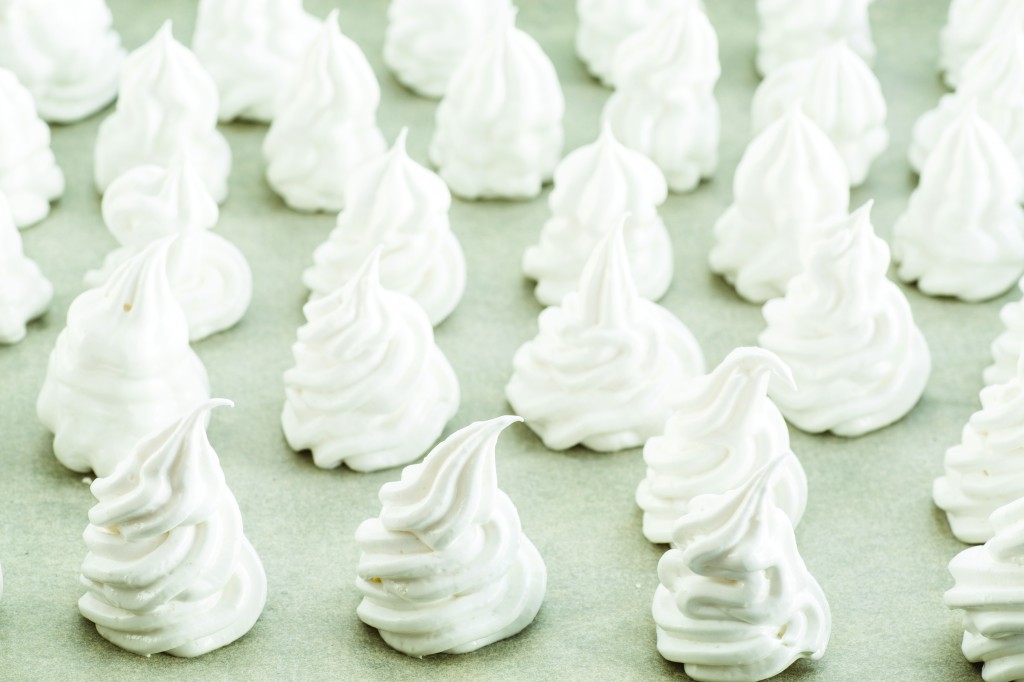 Last week we discussed eggs, one of nature’s perfect foods. Of course, you are familiar with the most basic uses for eggs — omelets, egg salad and the like. But eggs are much more versatile than that.

When egg whites are beaten, bonds in the protein are broken, causing the protein’s structure to unfold. This makes them change color and stiffen. Meringues are served like cookies, or they can be made in a variety of shapes to hold fruit, cream or ices. Meringues are baked at a very low heat for a long time. One name for them is “Forgotten Cookies” because they can be left in the oven for long periods of time after they’re done.

They are not supposed to be browned at all, but they need to be very crisp and dry. They will keep for at least a week if stored in an airtight container. Meringue is also used as the topping for desserts like baked Alaska (grapefruit halves topped with meringue) or lemon meringue pie. In these recipes, the meringue is broiled at a higher temperature for a shorter amount of time, resulting in a soft meringue with slightly browned peaks on top.

When separating eggs for meringue, be sure that not even a tiny bit of yolk gets into the whites. The fat contained in the yolks will inhibit stiffening of the whites. If any yolk falls into the whites, remove it by scooping it up with the jagged edge of your open shells.

In the bowl of your electric mixer, beat the egg whites at low speed until foamy. Add the cream of tartar. Turn up the speed on the mixer and continue to beat until soft peaks form. Stop the mixer to check on your foam. Soft peaks will fall over when the beaters are lifted out.

Continue beating, adding 1 tablespoon of sugar at a time and beating well after each addition, until stiff. Check foam by stopping the mixer and lifting the beaters. Peaks should stay upright and not fall at all. Be careful not to over-beat as your egg whites can go from perfect to grainy in a few seconds. This will take about 10 minutes. Using a pastry tube fitted with a large star tip, pipe the meringue in rosettes or stars directly onto the lined pans.

Bake 2 hours or until meringues are dry and crisp. Avoid preparing meringues on a rainy day as the excess moisture in the air will cause your meringues to weep or run.

Just as egg whites have lots of uses in our recipes, egg yolks are sometimes used on their own or as an addition to whole eggs in a recipe. Extra egg yolks in recipes add richness and structure to the finished dish. Flourless chocolate cakes and yeast doughs often include extra yolks. 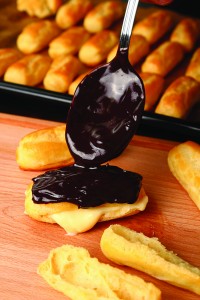 Egg yolks are used to make mayonnaise and other dishes high in fat, and are important as binding agents in many recipes. Egg yolks contain lecithin, which is an emulsifier, a factor that is crucial to sauces like Caesar salad dressing and mayonnaise, and custards like lemon curd and creme brulee.

An emulsifier is a substance that is attracted to both oil and water — something that is generally an anomaly. Being a natural emulsifier makes eggs fundamental to such dishes. Egg yolks also act as binding agents in meatballs and quiches.

In quiches and omelets, the power of eggs is evident in the “puffed-up” nature of these dishes. Heat causes the proteins in eggs to relax and build structure. Because they are not stirred during cooking, the protein strands hook up and strengthen.

Similar to quiche, frittata and tortilla espanola are egg dishes that are cooked on the stovetop. They are wonderful for brunch or lunch and can be served at room temperature, allowing them to be prepared in advance.

Peel and slice potatoes into 1/8-inch slices. Heat oil in a large skillet. Add sliced potatoes and onion and season generously with salt and fresh pepper. Cook over medium heat until potatoes are cooked through, turning and separating gently to promote even cooking. Remove potatoes and onion from skillet with a slotted spoon. Set aside.

Beat eggs with parsley and optional cayenne. Gently fold potatoes and onions into egg mixture. Add to the hot oil in the skillet. Cook gently over medium heat until the bottom is set and lightly browned, about 10 minutes.

Using a large dinner plate, invert the tortilla and cook the other side another ten minutes. Remove from skillet and cut in wedges or cubes. Serve warm or at room temperature. In the quintessential French dessert, eclairs or profiteroles, eggs once again provide structure to make the pastry puff and dry to allow room for custard or cream filling. These puffs are baked at higher temperatures to encourage the batter to blow up.

Preheat the oven to 450 degrees. Line 2 baking sheets with Silpat or parchment paper.

Place the water, margarine and salt in a medium-sized saucepan and bring to a boil. Continue boiling until margarine is completely melted. Remove from the heat.

Add the flour all at once and beat until the mixture forms a ball. Add the eggs one at a time, mixing after each to a smooth, shiny paste.

Using a piping bag fitted with a large or star-shaped tip, pipe mounds for profiteroles or thick strips for eclairs. Bake for 15 minutes at 450 degrees; then turn oven down to 350 degrees and bake for 15 to 20 minutes longer. Remove from oven and allow to cool completely.

Using a piping bag fitted with a doughnut-filler tip, fill puffs with custard. Fill just before serving as the filling will soften the pastry.