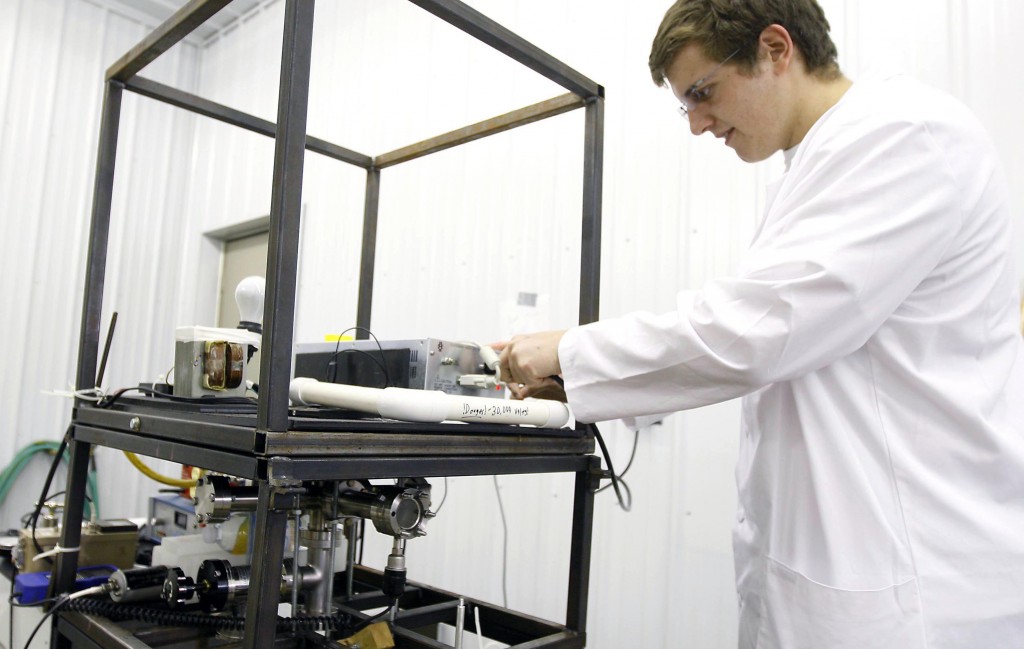 NEWCASTLE, Wyo. (AP) – A Wyoming high school senior who built a nuclear reactor was disqualified from the International Science and Engineering Fair this month on a technicality.

It seems that 18-year-old Conrad Farnsworth of Newcastle had competed in too many science fairs.

According to the Casper Star-Tribune, the infraction was reported by the former director of the Wyoming State Science Fair, who later did not have her contract renewed. Officials at the University of Wyoming, which sponsors the state event, said after the international fair that the director acted outside her authority.

The newspaper reports Farnsworth is one of only about 15 high school students in the world to successfully build a nuclear fusion reactor. Farnsworth says his disqualification was silly.

He graduated this month and plans to attend the South Dakota School of Mines.

VALLEJO, California (AP) – A California man is facing vandalism charges after authorities say he painted a crosswalk on a street, allegedly telling officials it was needed.

State transportation workers painted over Cardenas’ alleged crosswalk later in the day. A police cadet had been posted at the intersection until then to keep pedestrians from using it.

VIENNA (AP) – Some Austrian firefighters didn’t have to leave their station to deal with a recent alarm. The blaze came to them instead.

Fireman Roland Brandl says that colleagues were doing chores at the station in the town of Pregarten Wednesday when a car sped in with flames shooting from beneath it.

One man grabbed an extinguisher and doused the fire. No one was hurt.

The blaze was apparently caused by a cleaning cloth which was left under the hood.

State broadcaster ORF says the unidentified driver drove about 1 kilometer (0.6 mile) to the station after a passer-by alerted him to the fire.

Man Had Pencil in Head for 15 years

BERLIN (AP) – German doctors say a man spent 15 years with a pencil in his head following a childhood accident.

Aachen University Hospital says the 24-year-old man from Afghanistan sought help in 2011 after suffering for years from headaches, constant colds and worsening vision in one eye. A scan showed that a 10-centimeter (4-inch) pencil was lodged from his sinus to his pharynx and had injured his right eye socket.

The unnamed man said he didn’t know how the pencil got there but recalled that he once fell badly as a child.

The German doctors removed the pencil and say the man has recovered.

Hospital spokesman Mathias Brandstaedter said Wednesday the case was presented for the first time at a medical conference this week.

Jim Dreyer has made direct crossings of each of the five Great Lakes. He’s scheduled to begin his swim on Aug. 5 from the Clinton River Boat Club near Algonac, and the event is to raise funds and awareness for Habitat for Humanity. The swim is expected to take 30 hours and end Aug. 6 at Detroit’s Belle Isle.

Dreyer said the effort will be one of his most challenging, The Grand Rapids Press reported.

“It will be a real ‘train of pain,’ symbolic of the pain felt by Michigan families trying to keep their heads above water,” Dreyer said. “However, instead of sinking with the weight of our burdens, I believe that together we can triumph and be the bricks that rebuild lives, rebuild communities, and strengthen the foundation of this great state.”

When Dreyer swam across Lake Superior, he towed a boat loaded with 250 pounds of supplies.

Dreyer has partnered with Habitat for Humanity of Michigan to help fund building projects for up to 75 affiliates through the Cornerstone Strength Swim Campaign. Engraved commemorative bricks, including ones towed by Dreyer, will be sold to support the building project of the purchaser’s choice.

Lakeshore Habitat for Humanity, which serves Ottawa and Allegan counties, is part of the effort.

KANSAS CITY, Mo. (AP) – A 10-year-old boy who found $10,000 in a drawer at a Kansas City hotel where he was staying with his dad turned the money over to police.

Tyler Schaefer found the neatly stacked bills Saturday in the room where he and his father, Cody Schaefer, were staying at a hotel near the airport, The Kansas City Star reported.

Cody Schaefer said Tyler, a Cub Scout, is always on the lookout for clues and treasure.

“He looks for stuff at random,” Schaefer said of his son. “He’s very observant.”

Schaefer said after they checked into their room Saturday, Tyler began opening all the drawers, and it wasn’t too long before Tyler announced: “I found money!”

Schaefer thought maybe his son had found a forgotten $10 bill, but when he looked closer he saw the stack of bills totaling $10,000. He wondered if the bills were fake, but saw they had the appropriate watermarks and seemed legitimate.

Schaefer told his son they couldn’t keep the cash because they didn’t know who it belonged to. They handed the money over to two off-duty police officers working security at the hotel. The officers contacted Sgt. Randy Francis, a property and evidence supervisor, who stored the cash at a police facility.

Police said it’s unclear how long the money had been there, and they can’t track down every guest who stayed in that room recently. Police spokesman Capt. Tye Grant said Thursday no one had claimed the money yet.

According to a Missouri statute, lost money could revert to a finder after about seven months if no one can prove ownership. But the owner then has another year to prove the money is his or hers and claim it from the finder.