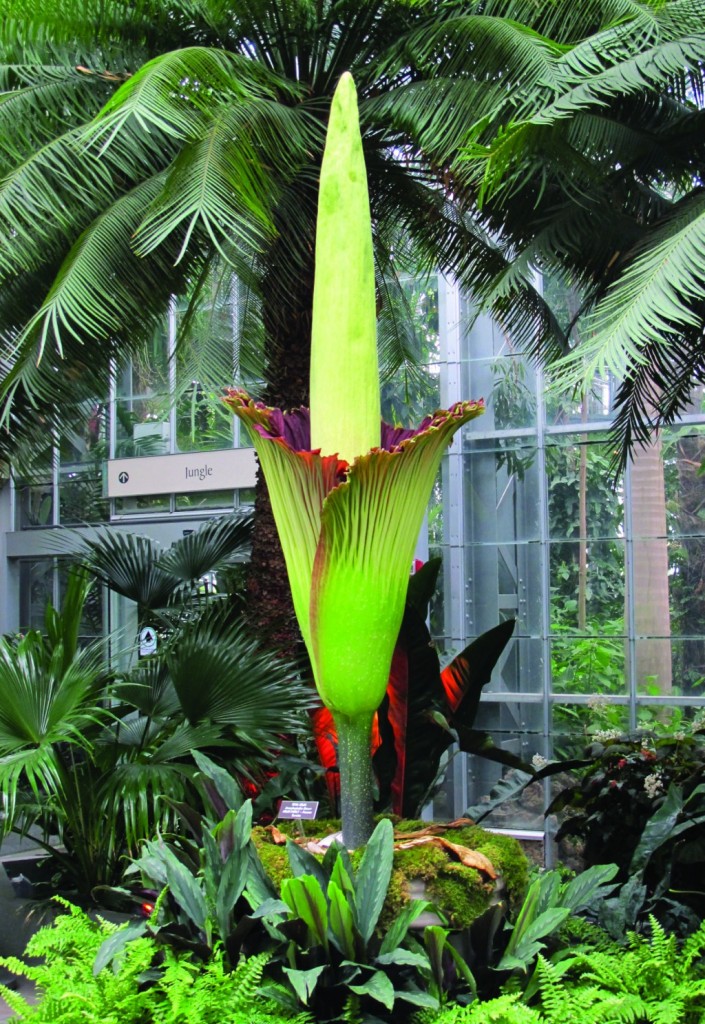 WASHINGTON (AP) — The long wait is finally over for visitors who have been yearning for a whiff of a giant flower that smells oddly like rotting flesh.

The giant rainforest plant known as a “corpse flower” for its terrible smell began blooming Sunday afternoon at the U.S. Botanic Garden next to the Capitol. Experts had been anticipating its bloom for more than a week and have extended the garden’s hours for visitors.

Garden officials expect the flower to hit “peak smell” early Monday, and remain open for one or two days.

The flower is officially known as the titan arum. It is native to the tropical rainforests of Sumatra, Indonesia, and was discovered in 1878.

OGDEN, Utah (AP) — A Utah man has his wallet back 44 years after leaving it behind in an apartment in Tooele County.

William Jones told Ogden’s Standard-Examiner that he received a call out of the blue from a stranger who said she found it.

The 66-year-old Jones said opening the wallet a few weeks later released a flood of memories. He found IDs, family photos and receipts, including one that showed he paid $1,600 for a 1965 Mustang.

The stranger turned out to be Traci England Nelson, the granddaughter of the apartment landlord in 1969, when Jones moved out of the unit to pursue another job in northern Utah.

Nelson said her grandfather, Deloyd England, rented to Jones and other employees of Utah’s Tooele Army Depot and was used to seeing them leave items behind.

England put the wallet in a storage locker in hopes of returning it to its owner, but the wallet wasn’t discovered until after he died in 2000.

Jones said he’s glad Nelson tracked him down because the wallet brought back good memories, including ones about his 1965 Mustang.

“ … For her to take all that time to find me is incredible,” he told the Standard-Examiner.

Nelson said her grandfather put other items left behind by tenants in the storage locker, including photo albums, a wedding registry and yearbooks. She’s currently trying to track down the owner of a box of photos.

“I came across all these treasures and I couldn’t possibly throw these away. These are history for somebody,” she said.

LIHUE, Hawaii (AP) — A 54-year-old fisherman is safe after his 14-foot boat capsized as he was landing a 230-pound tuna in the ocean off Hawaii.

The Coast Guard rescued Anthony Wichman on Friday after receiving a distress call from his wife.

Wichman was fishing about 10 miles southwest of Port Allen on the island of Kauai Friday morning when he hooked the Ahi tuna. Coast Guard Lt. Jessica Mickelson tells Hawaii News Now that Wichman was able to use his cellphone to call his wife for help.

The Coast Guard dispatched a helicopter to rescue Wichman. Friends arrived on another boat and were able to right Wichman’s boat. They towed it — and the fish — back to port.

Texas contractor razes house, but the wrong one

FORT WORTH, Texas (AP) — A demolition company has mistakenly torn down a three-bedroom home in North Texas rather than the condemned building next door.

David Underwood and his wife placed their Fort Worth house on the market with the intention of moving into the retreat they purchased near the shores of Lake Worth. The lakeside land has been in the family for decades and Underwood bought it from an aunt earlier this year.

But when they stopped by to mow the lawn Saturday, they found the home was gone. A slab of foundation remains.

Fort Worth hired the demolition company to raze the condemned building, and was billed more than $6,000 for the work.

Underwood is seeking a settlement from the city. A city spokesman says officials are investigating.