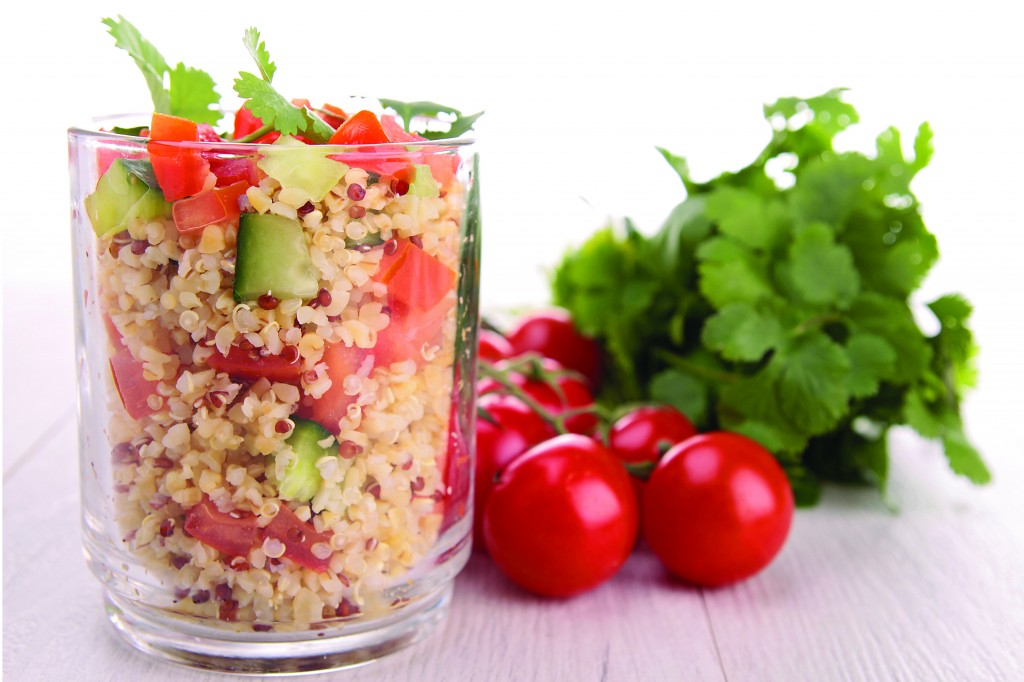 Quinoa was one of the main foods for the people of South America since approximately 1200. Quinoa was a food that could survive in a wide variety of growing conditions. Its unusually extensive nutrient richness helped it gain popularity around the rest of the world in recent years. While some growing has begun in the United States, most quinoa consumed in this country still comes from South America. Peru remains the largest commercial producer of quinoa.

While quinoa can be eaten in the same way as a grain, or ground into flour as is so commonly done with grains, quinoa has significantly greater amounts of both lysine and isoleucine, allowing the protein in quinoa to serve as a complete protein source. In comparison to grains like wheat, quinoa is higher in fat content and can provide valuable amounts of heart-healthy fats like monounsaturated fats and omega-3 fatty acid.

Recent studies have shown that boiling, simmering, and steaming quinoa do not compromise the quality of quinoa’s nutritional benefits, allowing us to enjoy it cooked while maintaining this benefit. Food scientists are still studying this phenomenon.

One cup dry quinoa gives you about three cups cooked quinoa. You need about two cups liquid to cook one cup quinoa and it will cook in about 20 minutes. Be sure to rinse quinoa in a strainer to remove the bitter outer coating. Quinoa is delicious when cooked in vegetable stock or chicken broth. Try adding some crushed garlic, fresh rosemary or a dash of black pepper. 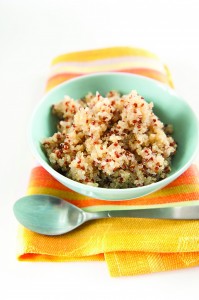 Place the quinoa in a fine-mesh strainer, and rinse thoroughly with cool water. Rub and swish the quinoa with your hand while rinsing, and rinse for at least 2 minutes under the running water. Drain.

Heat a drizzle of olive oil in the saucepan over medium-high heat, and add the drained quinoa. Cook, stirring, for about 1 minute, letting the water evaporate.

Stir in the liquid and the salt and bring to a rolling boil.

Turn heat down to the lowest setting. Cover and cook for 15 minutes.

After 15 minutes, turn off the heat and remove the pot from the burner. Let stand for 5 minutes, covered.

Remove the lid, fluff the quinoa gently with a fork, and serve. You should see tiny spirals (the germ) separating from and curling around the quinoa seeds. 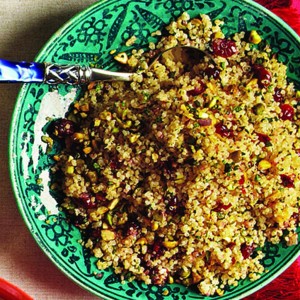 Quinoa with Craisins and Pistachios

This tasty side dish adds elegance and nutrients to any meal!

Rinse and drain quinoa. Heat 2 teaspoons oil in a large saucepan over medium-high heat. Add shallots to pan; sauté 2 minutes or until tender. Add 2 cups water, wine, and salt to pan; bring to a boil. Add quinoa; cover, reduce heat, and simmer 15 minutes or until liquid is absorbed and quinoa is tender. Remove from heat; set aside, and cool slightly.

Tabbouleh is usually made from couscous; the quinoa is an excellent substitute because it looks very similar.

Bring 1 cup of water to a boil in a small saucepan. Meanwhile, in a small non-stick skillet, toast the quinoa over moderately-high heat until the grains give off a nutty aroma and start to pop. Pour the quinoa into the boiling water, taking care that the pot doesn’t boil over. Turn it down to a simmer, cover, and cook until the water is absorbed and the quinoa is tender, 12 to 15 minutes. Remove it from the heat and allow to cool.

Combine the parsley, mint, cherry tomatoes, cucumber and the cooled cooked quinoa in a large bowl. Pour the dressing over the salad and toss to coat. Taste for seasoning, and let sit for about 5 minutes before you serve. This salad tastes even better the next day.

One should consult a Rav regarding checking of problematic vegetables or herbs for infestation.