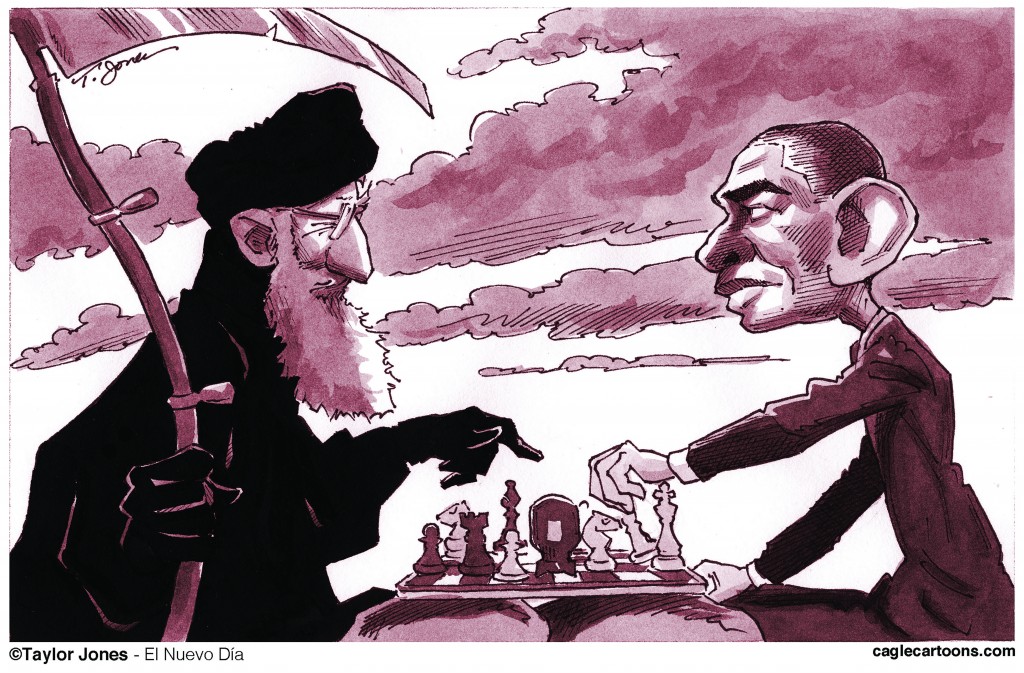 They “labeled themselves strong and decisive, while dismissing those who disagreed as weak — even appeasers of a malevolent adversary,” complained Obama about the pejorative treatment of those opposed to war in Iraq in 2003. But now that the White House is making an all-out effort to sell the nuclear deal with Iran, or Joint Comprehensive Plan of Action (JCPOA), to Congress and to the public, the rigorous standards expected of their critics have disappeared into thin air.

For someone who celebrated the deal as a “historic chance” and the “strongest non-proliferation agreement ever negotiated,” the president has exhibited a surprising lack of confidence by not sticking to the merits of the deal. Instead, he and his advisors over recent weeks have resorted to a series of vicious and bizarre ad hominem attacks to avoid a thorough debate about the potential ramifications of a U.S.-Iran detente.

The White House is acting out because, after having invested a disproportionate amount of political capital in negotiations with an international pariah state with a notorious trust deficit, the president’s legacy is now under threat.

The debate about the JCPOA has been turned into a question of loyalty — the binary choice of deal vs. war. Either you are with us or you must be motivated by ulterior motives and trying to derail the implementation of the agreement to foster the agenda of a foreign government. “Every nation in the world that has commented publicly, with the exception of the Israeli government, has expressed support,” said the president in a speech at the American University [in July]. The attacks hit an all-time low when Obama equated the Republican opposition and Iranian extremists: “It’s those hardliners chanting ‘Death to America’ who have been most opposed to the deal. They’re making common cause with the Republican Caucus.”

But no other mantra has been reverenced as much by the president as the claim that “the same people” who argued for intervention in Iraq are pioneering the opposition to the administration’s dealing with Iran. Based on Obama’s own logic, it implies that the president believes that it was the Israeli government and the American-Jewish lobby that dragged the country to war in 2003 and sacrificed American lives for Jewish interests.

This is a worrisome distortion of reality. The Israeli government under Ariel Sharon refrained from publicly distancing itself from the decision to intervene in Iraq, but records reveal that he feared spill-over effects and regional radicalization and, unlike the Bush administration, was deeply skeptical of challenging the wisdom of Arab exceptionalism. Iraq, together with Saudi Arabia, formed the regional counterbalance to Iran and the power vacuum created by the removal of the Ba’athist regime strengthened Israel’s number one enemy: The Islamic Republic and its Shia proxies.

The narrative put forward by the president is at best a naive oversimplification or, at worst, a deliberate deception. Contrary to what the White House would have us believe, the opponents and skeptics of the JCPOA are anything but a homogenous group, illustrated, for example, by the number of undecided Democrats in the House and Senate and those lawmakers who came out against the deal.

Senator Chuck Schumer (D-New York) has found himself the recipient of a tidal wave of abuse, including stereotypical anti-Semitic allegations. The liberal political blog Daily Kos published a cartoon depicting Schumer as a “traitor” with an Israeli flag; a New York Times editorial lamented the “unseemly spectacle of lawmakers siding with a foreign leader against their own commander in chief”; and the president stands accused that his own rhetoric is serving to reinforce anti-Semitic tropes — shady lobbyists with money representing the interests of a particular segment of the population, pushing the U.S. to war for their own benefits — making it a Jewish issue when it really is not. A recently conducted poll by the Los Angeles Jewish Journal revealed that U.S. Jews are more likely to back the president over Iran than non-Jews.

Is Obama a rabid anti-Semite? Of course not. But his administration is willfully turning a blind eye to rising levels of Jew-baiting. An American Jewish online magazine did not mince words in its sharply written editorial: “This use of anti-Jewish incitement as a political tool is a sickening new development in American political discourse, and we have heard too much of it lately — some coming, ominously, from our own White House and its representatives … it’s the kind of dark, nasty stuff we might expect to hear at a white power rally, not from the president of the United States.”

The mainstreamization of Jew-baiting in the U.S., against the backdrop of an agreement with an inherently and profoundly anti-Semitic regime, allows for only one conclusion: The White House has clearly failed to grapple with the eliminationist ideology of the regime.

The destruction of the Jewish state is a paramount theological imperative for the Islamic Republic, and the JCPOA is not going to change how Iran behaves in the region when most of the constraining elements are being lifted. Despite the talk of a new era under President Rouhani, the ayatollahs are ultimately calling the shots in Tehran. And Israel, in a post-Holocaust world, knows that when someone says they want to annihilate you, you better believe them.

All this is happening at a time of a new Jewish exodus, with anti-Semitism sharply on the rise throughout Europe. The year 2014 saw the highest number of anti-Semitic hate crimes reported in the United Kingdom since 1984; in Italy, neo-Nazi inscriptions like “The Shoah is a fraud” and “Anne Frank is a liar” were sprayed on the walls of a former Jewish ghetto; the anti-Semitic Hungarian far right Jobbik party won its first by-election; in Belgium, a man of Algerian origin walked into a Jewish museum with a Kalashnikov rifle and killed four people; a Jewish man on security duty in front of the Copenhagen Great Synagogue was shot in the head; and in France, an Islamic extremist massacred four Jewish hostages in a kosher supermarket. Then, even more extraordinarily, the president of the United States labeled the victims “a bunch of folks” who were randomly shot. Of course there was nothing random about the assault. They were brutally slaughtered simply for being Jewish.

In the wake of the Charlie Hebdo shooting and the Porte de Vincennes siege, heavily armed soldiers had to be stationed outside Jewish schools and synagogues across France. Europe in the 21st century resembled a war-zone — a mere 70 years after the Holocaust. Going to school or a place of worship should never be an act of bravery — but for Jews it has become exactly that. You do not have to be a pessimist to think of the status quo as an existential threat to Jewish life in Europe.

The White House would be wise to reconsider if their end goal of selling the JCPOA justifies all means, including pursuing its ruthless campaign on the back of the already suffering Jewish minority. The nuclear deal with Iran is going to affect the security of millions and the administration owes it to the American people, including but not exclusively the Jewish community, to engage in a mature dialogue free of identity-associated character assassinations and dual-loyalty tropes. You do not have to be Jewish to be deeply skeptical of a flawed agreement with a committed enemy of the West, which makes no secret of its desire to evaporate the only Jewish state from the face of the earth once and for all.