Columns Nutrition What to Do When Kids Reject Veggies
Nutrition 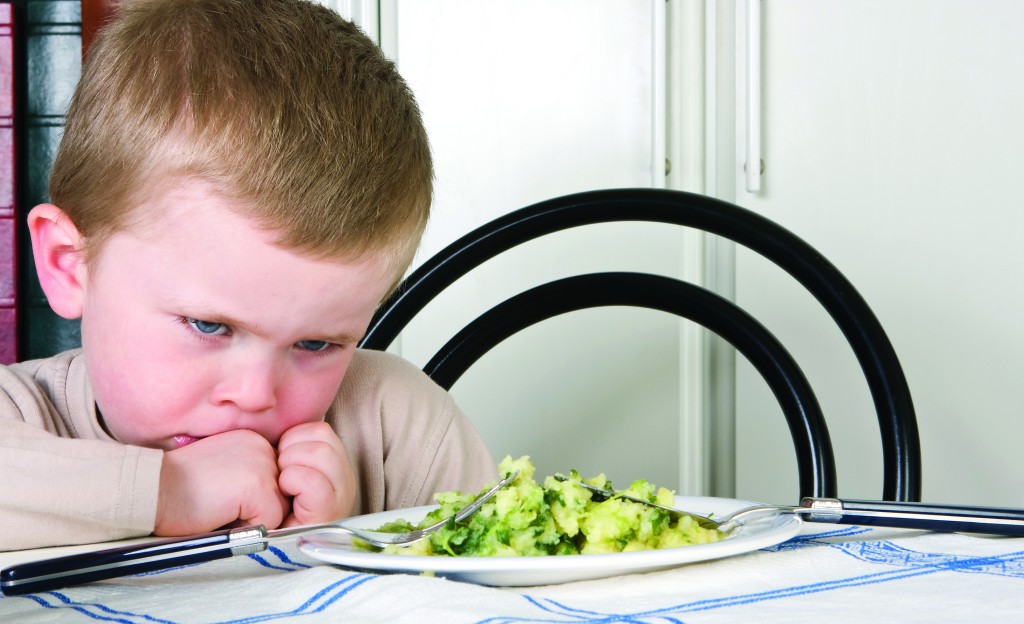 Our kids eat less than half the vegetables they need, according to a recent report published by the Federal Interagency Forum on Child and Family Statistics. Some parents have taken to hiring outsiders to help them raise a veggie lover, but for those not wanting to outsource — or not having the money to do so — science offers some ways to make the peas and carrots go down easier.

Resistance often starts around 18months of age: sealed lips, head turned away, food left untouched on the plate. Scientists have a term for when children won’t try new foods — “food neophobia.”  Peaking between ages 2 and 6, being standoffish from unknown foods protects a child, who is becoming less dependent, from eating substances that might be poisonous. Unfortunately, because there are so many kinds of vegetables, these are often the rejected foods.

How much your kid fears new foods may be highly heritable, say authors of a study of twins published last year. If you loathe trying new food, it appears, your child may, too. What’s more, many vegetables are bitter, and children are preprogrammed by nature to avoid bitter taste, since it may signal the presence of toxic compounds.

“Many parents don’t realize that it’s quite normal that most children will be fussy with vegetables,” says psychologist Gemma Mitchell of Britain’s Loughborough University.

So should you just give up and fry the potatoes, and opt for a once-a-day vitamin pill that will deliver the vitamin C, E and folate that picky eaters often miss in their diets?

Probably not. Nutritionists say vitamin pills are no replacement for vegetables and fruit. Veggies contain many important substances in addition to vitamins and minerals such as phytonutrients, which lower the risk of cancer and cardiovascular disease.

With all this in mind, here are some techniques, gleaned from the latest research, for dealing with food neophobia, or what could be called Vegetable Aversion Syndrome:

Offer vegetables with a glass of water.

In an article published last March in the journal Appetite, University of Oregon researcher Bettina Cornwell shows that kids may eat more veggies if they are given water with a meal instead of soda or juice. Cornwell offered 75 children age 3 to 5 a plate of carrot sticks and red pepper accompanied either by plain water or by a sugary drink, Hawaiian Punch. Results were impressive. When served water, kids ate 35 percent more veggies. “When you take a sweet drink with your meal, you can’t taste the delicate sweetness in a carrot,” Cornwell explains. She advises parents to replace even a flavored vitamin water with a plain one to help children develop a preference for subtle natural flavors.

Don’t give up, even after many rejections.

In another 2013 Appetite article, Mitchell points out that you may need to offer your toddler or preschooler new food even up to 15 times before it gets accepted. The reason? Typical childhood neophobia: If you don’t recognize a food, you don’t trust it and you don’t eat it. Yet most parents don’t persevere that long. Faced with wrinkled noses, they usually give up after three to five attempts. “Keep offering the food again and again,” Mitchell says, basing her comments on evidence from many studies. “The child doesn’t even have to eat it. Repeated exposure is all that is needed.” Let your kids play with the broccoli or spinach on their plates, let them touch the vegetable, smell it. If they don’t eat, don’t panic. Simply take the plate away. And a few days later, try again.

Researchers say pressuring kids to eat veggies — or anything else — tends to backfire by spurring negative emotions that will become associated with the vegetable. As in: When there is cabbage on my plate, I feel sad, scared, angry. According to Mitchell, even a simple “just one more bite” can be problematic. A 2006 investigation by researchers from Pennsylvania State University and Appalachian State University found that when 3-to-5-year-olds were continually pressured to finish a vegetable soup during lunch — the researchers said, “Finish your soup, please” once a minute during a five-minute period — they developed more of a dislike for the food than those who weren’t pressured. What’s more, according to a 2002 study of food aversions among college students, such adults’ food aversions can often be traced back to childhood struggles at the dinner table.

This may sound counterintuitive, but it turns out that if you pile up more veggies on your kid’s plate, more will get eaten. “What’s really effective is giving children big portions of vegetables at the start of a meal when they’re hungry. In our lab we’ve done this with raw carrots and with tomato soup. The bigger the portion was, the more the kids ate,” says Barbara Rolls, a professor of nutritional sciences at Penn State. In an experiment conducted in 2010, Rolls and her colleagues showed that doubling the portion size of carrots offered to preschoolers as a first course increased the consumption of that vegetable by 47 percent. So serve a salad before the mac and cheese. And you should probably keep the main portion small: An investigation published last year in the American Journal of Clinical Nutrition showed that the bigger the entree (the authors used mac and cheese in their experiments), the fewer fruits and vegetables get cleared off the plates.

“One of the most effective strategies we’ve found is the hidden-vegetable approach: putting puréed vegetables into dishes,” Rolls says. “Most kids don’t care what’s in their food as long as it tastes good. With baked goods like zucchini bread or pumpkin bread, we’ve found that kids actually prefer those with added vegetables because they are moister.” So put some grated vegetables into casseroles, pasta dishes or mac and cheese. Another scientifically tested strategy is to serve vegetables with a dip or with some seasoning. It works for two reasons: first, because the familiar sauce will make the unfamiliar vegetable appear more trustworthy; second, because the sweetness of sugar or ketchup masks the bitter taste of vegetables. A study published in 2012 showed that offering preschoolers salad dressing as a dip to go with raw broccoli increased consumption of the vegetable by as much as 80 percent.

“If a child is upset, many parents will say, ‘Oh, come here, have a cookie.’ Children are quick learners: Soon they start equating biscuits with comfort,” Mitchell says. But you can build a similar positive association with vegetables, offering up a carrot stick instead of a cookie. It’s not about tricking the kids, but about building positive associations with a healthful food, she says.

Relax and have fun.

Cut the veggies into creative shapes, mix as many colors on the plate as possible, allow the kids to get messy while eating. In other words: Let them have fun with food. Giving veggie dishes interesting names works, too. An experiment published in 2012 found that elementary students ate twice as many “X-ray Vision Carrots” in a school cafeteria than identical ones described simply as “carrots” — even though they were both exactly the same, plain carrots. “Show them how to grow food, even if it’s just a few simple herbs. Take them to a grocery store, let them help pick the vegetables. Get them involved rather than simply demanding that they eat their veggies,” suggests Rolls.

Finally, even if none of this works, relax — and wait. A 2010 study that followed a group of kids from age 2 to 11 found that picky eating declines as kids get older. By the time most are 6, only about 3 percent remain very fussy.