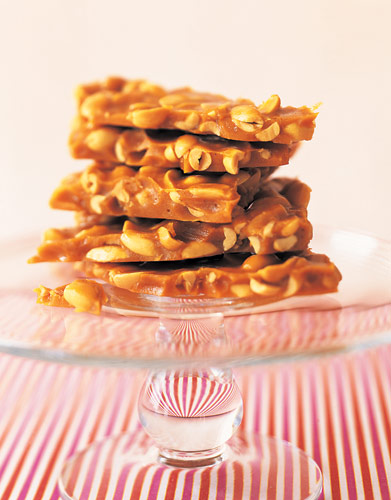 Did you know that there is a National Peanut Brittle Day? Yes, there actually is one and it is celebrated on January 26.
Brittle was one of the first types of candy ever made. Because we find peanut brittle recipes most often in American cookbooks, it is generally believed to be an American recipe, but many countries has their own version containing a combination of cooked sugar and nuts.

It’s not known why January 26 was chosen to be the day to commemorate peanut brittle. Sure, some folks feel peanut brittle should be celebrated every day of the week, but that would be too much of a good thing…don’t you think?

Peanut brittle made with corn syrup, melted sugar and nuts began to appear in cookbooks around the 19th century. Peanuts became popular in America during the Civil War, when, according to the National Peanut Board, soldiers who were fighting in the war survived off peanuts.

There is also an interesting tale associated with peanut brittle. It is believed that Tony Beaver, a folk hero, created peanut brittle when he stopped a creek from flooding using peanuts and molasses. Not only did he save a town, but he also gave them a terrific snack.

There are other accounts which state that its invention was the result of a mistake. One story tells of a woman in New England who was making some taffy. She accidentally poured baking soda into the mix instead of cream of tartar. She tasted the mixture and found it delicious. Eventually she gave some to her friends and word quickly spread.

Whatever its origins, peanut brittle became immensely popular in America. And while the debate about the history of peanut brittle continues, its basic ingredients have remained the same, with some subtle changes made by manufacturers.

First, sugar is combined with water or corn syrup and cooked to 300° F. The result is caramel. Peanuts are then added. Next baking soda is added to aerate the mixture. The brittle is spread in a pan and left to cool. When it has cooled sufficiently, the pieces are chopped into smaller pieces.

To celebrate National Peanut Brittle Day, why not try making some of your own?

Line a jelly roll pan with a Silpat or parchment. If you are using parchment, spray it with oil-and-flour baking spray.

Combine sugar and corn syrup in a large, heavy saucepan. Set over medium-high heat, and bring to a boil, stirring constantly. Use a large saucepan as the mixture will double in size when you add the remaining ingredients.

Clip a candy thermometer to the side of the pot. Continue boiling, without stirring, until temperature reaches 295°F, about 6 minutes. Using a candy thermometer is essential because even a few degrees can make the difference between brittle that hardens properly and overcooked, burnt caramel. When the sugar begins to brown, add the nuts and stir gently to ensure even cooking. Once the nuts are coated with the sugar mixture, remove saucepan from heat, and stir in the butter or margarine and baking soda; the mixture will begin to foam up, so mix quickly and carefully. Once it is fully combined, pour the mixture onto the prepared baking pan. Using a greased spatula, spread the mixture as thinly as possible on the pan.

Allow the brittle to cool completely, about 45 minutes, and then break into bite-size pieces. Store in an airtight container for up to two weeks.

Baking soda is added to lighten the sugar and give an “easier bite” to the peanut brittle, causing it to break easily when you bite into it. It also makes the sugar base around the peanuts opaque by foaming up and causing small air bubbles to form in the sugar syrup. If the brittle is to be used for a cake garnish, you can omit the baking soda so that it’s clear instead of opaque — but it will also be harder to eat.

Foods with high sugar content, like peanut brittle, tend to draw moisture from the air, so try to make this candy when the weather is sunny and dry rather than humid or rainy.

Combine your homemade peanut brittle with our ready-made caramel and store-bought ice cream for an extra special dessert. 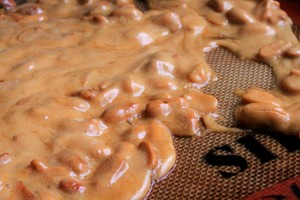 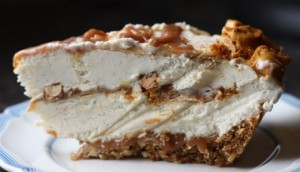 Spoon remaining ice cream over the brittle and smooth the top. Drizzle the remaining peanut butter over it and top with caramel. Sprinkle edge of pie with 1/2 cup brittle, chopped fine. Freeze 4 hours before serving.

Talk about the “wow” factor!