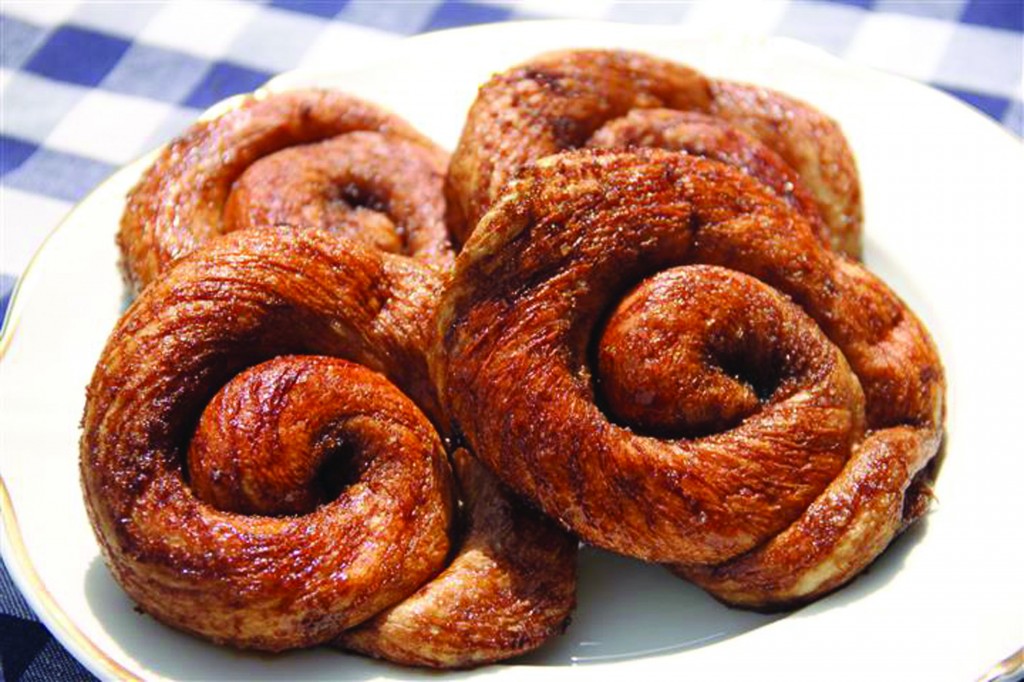 In the 1500s the Netherlands were known for being tolerant of any religious practices. This meant freedom for Christians as well as Jews, who flocked there in large numbers. They mostly came from Spain, where only Catholicism was acceptable. The Jews were Sephardic and brought with them traditional Sephardic foods. But as word spread, Ashkenazi Jews arrived as well and by the 1700s made up a large part of the Jewish population. Each culture brought its own influence to Holland and contributed dishes that remain popular today. One of the most famous is called “Zeeuwse Bolus,” orsweet spiral buns. These sweet sticky buns are covered in cinnamon and sugar and for this reason are sometimes referred to as “inside-out buns.”

Sift all of the flour into a bowl and add the yeast. Heat the milk until it is lukewarm. Make a depression in the flour and add ½ cup of the warm milk. Now add the egg and butter or margarine into the same depression. Start the mixer slowly and add the rest of the lukewarm milk one bit at a time into the flour, kneading until you have a silky smooth dough. Let the dough rise for about 1 hour under a damp cloth in a warm place.

Mix the cinnamon and brown sugar together.

Knead the dough once again, by hand, for about a minute.

Cut the dough into 60 small pieces of about 2 ounces each. Let the dough rise for about 15 minutes under a plastic bag or tarp. Spread cinnamon and sugar on your countertop. After 15 minutes, roll each ball in the cinnamon-sugar mixture. Set aside to rise for another 15 minutes.

Roll the dough pieces through the sugar, making long strings about ¾” in diameter. Make sure they’re well coated. Twist the rope around your finger to make a knot. Put the boluses on a lined baking sheet. Cover with plastic wrap and let them rise for another half hour.

Preheat the oven to 350°. Bake for 10 to 12 minutes until the boluses are golden brown. After baking, turn the boluses over immediately. Be careful, the melted sugar is HOT! Let the boluses cool down a bit before serving.

These are best served warm and sticky!

Another traditional Dutch Jewish food is their version of potato kugel, known as “Pom.” It combines shredded potatoes and chicken along with a delicious mix of spices. 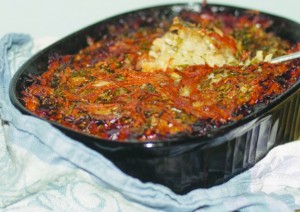 1 pint grape or cherry tomatoes, each cut in half

Juice and zest of 2 small oranges

Preheat the oven to 375°. Spray a 9” x 13” casserole dish with nonstick cooking oil spray and set aside.

In a medium-sized saucepan, heat 2 tablespoons of the olive oil over high heat until it shimmers. Add the onions and stir, cooking for 8 to 10 minutes, until onions have softened and are translucent. Remove the onions to a bowl and set aside. Reserve the pan.

Lower the heat and return the onions to the pan, stirring well. Add the tomatoes, 1 cup of the stock, the lemon juice and zest, brown sugar, allspice, and nutmeg and stir well. Pour this mixture into the prepared casserole dish.

Place the shredded potatoes into a large mixing bowl. Add the chopped parsley, the eggs, 1 teaspoon salt, the remaining stock and 1 tablespoon oil and stir to combine. Arrange this mixture evenly over the chicken stew mixture in the casserole dish. Drizzle the remaining oil over the potato layer and place in the oven.

Bake for 45 to 50 minutes, or until the potatoes are a deep golden brown and crunchy on top. Remove from the oven and serve immediately, or allow to cool and refrigerate, covered. To reheat, cover with foil and bake at 300°F until heated through; then uncover, increase the heat to 450° and allow the top to get crunchy again. The potatoes will have soaked up the liquid the second day and it won’t be as crunchy, but it will be equally delicious.