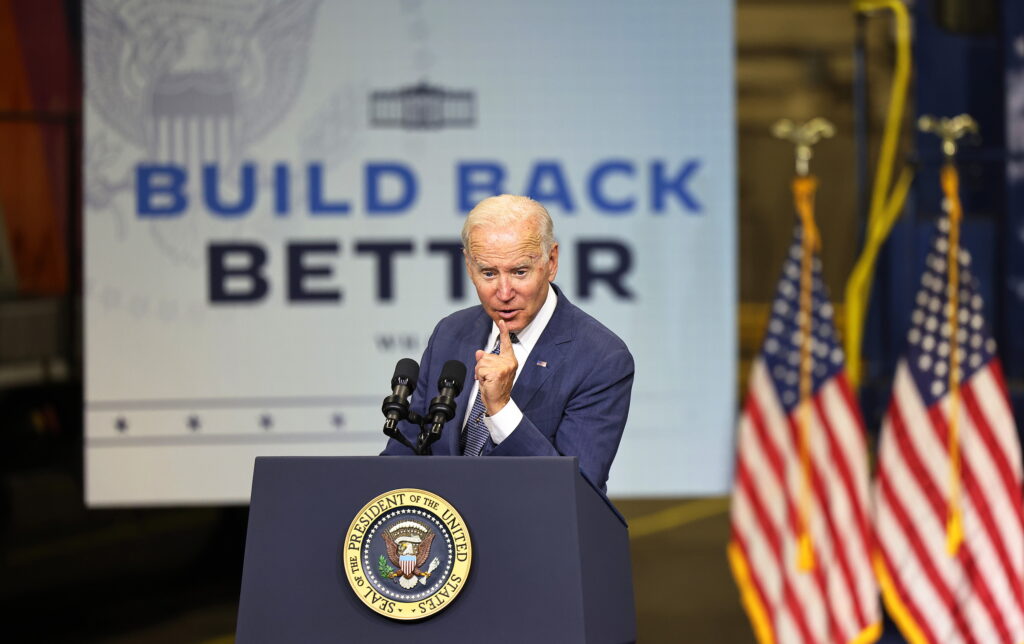 The indefinite delay of President Joe Biden’s signature domestic policy bill has derailed the Democrats’ strategy to stave off a Republican onslaught in the 2022 congressional elections, and the party may be left without a fallback option.

Democratic leaders in the Senate had announced that a vote previously expected before the end of the month would be punted into next year, a decision some strategists fear could prove fatal to the legislation’s prospects. Then on Sunday, Sen. Joe Manchin effectively torpedoed the Build Back Better plan, saying he simply could not support the package as it stands — further clouding plans to campaign on its passage.

“I just can’t,” he told Fox News. “I’ve tried everything humanly possible. I can’t get there.”

Even if it is somehow signed into law in the new year, the delay leaves less time for party groups and candidates to get the word out about what it does, a cornerstone of the Democrats’ plan as polls show voters aren’t sure what is in the bill and don’t think that it will help them directly.

Democratic strategist Dave Heller said that the party must pass at least a slimmed-down version of Build Back Better to remain competitive, preferably one with easy-to-explain benefits like a cap on the cost of insulin or the expansion of prekindergarten programs.

“We have to run on something,” he said. “We can’t have complete control for two years and say our biggest accomplishment was an infrastructure bill.”

The debate is taking on extra urgency with Democrats facing an uphill battle to defend their House and Senate majorities next year.

Republicans are poised to seize on inflation, the persistent coronavirus pandemic and Biden’s foreign-policy missteps — all of which have dragged down his numbers. Twenty House Democrats have announced they won’t seek reelection, leaving open seats, while key states are drawing district maps that heavily favor the GOP, in addition to the natural advantage to the minority party in midterms.

To complicate matters, the Build Back Better bill is an omnibus of almost all of Biden’s domestic legislative agenda, which makes it harder to sell than a smaller, more straightforward policy measure. Also, some of the easier-to-explain ideas, like free community college or expanding Medicare to cover dental procedures, have been dropped because of concerns about costs from centrist Democrats.

Even previous victories are in perilous shape. Senate Democrats will now miss an end-of-the-year deadline to extend a child tax credit that has been paid out in monthly installments over the last year. Even though one study showed it cut the child poverty rate by 25% over the last year, in recent polls many Americans have said they aren’t sure whether they received the credit, think it only helped their family a little or don’t know which party is responsible for it.

Party strategists have long planned to spend the next year focusing on how the Build Back Better bill will help with family budgets.

Sharon Yang, a spokeswoman for Building Back Together, a Democratic group supporting the Biden agenda, said that as soon as the president signs a bill, they will double down on advertising and other efforts to promote it.

She remained optimistic that despite the delay, Democrats would come together on some version of the legislation next year, creating a contrast with Republicans who uniformly oppose it.

“The president has been very clear that failure to pass the Build Back Better Act is not an option,” she said. “He’s acknowledged that time is needed to finalize negotiations, but continues to work tirelessly with leaders in Congress to ensure this bill gets passed as swiftly as possible, while Republican legislators refuse to lift a finger to help lower costs for working families.”

Democratic consultant Mike Ceraso said he wasn’t sure that trumpeting legislative accomplishments was going to be compelling enough, especially because so many Americans are “tired and frustrated” after two years of the pandemic and the recent rise in inflation.

“Republicans are in a much easier place to frame the discussion around the non-success stories — your milk is going up, your gas is going up and your dollar isn’t going as far,” he said.

With an eight-member edge in the House and a tie in the Senate, even a slight shift in electoral fortunes could give Republicans control. In addition to Democrat retirements, Republican-led state legislatures have redrawn maps during the decennial congressional redistricting process, giving them a wide advantage over Democrats.

Recent polls have shown a narrow Republican advantage on the generic congressional ballot question, which asks voters which party they would support in an election.

National party chair Jaime Harrison has tried to energize Democrats in battleground states like Florida, Georgia and Pennsylvania, while state parties have held events in places like Milwaukee, where local leaders highlighted spending that would eventually repair some of the hundreds of bridges classified as structurally deficient, and Lorain, Ohio, where officials touted new funding for restoration efforts on Lake Erie.

Ads from the nonprofit advocacy group Majority Forward running in Nevada and New Hampshire praise Democratic Sens. Catherine Cortez Masto and Maggie Hassan, who are up for reelection, for voting for the infrastructure bill and supporting the still-under-negotiation plan, saying it would “lower costs.”

Build Back Better is a sprawling bill that proposes to do everything from extending the child tax credit to capping prescription drug costs, among other social initiatives. Yet its prospects are uncertain given that Democrats have to pass it without Republican votes and Manchin has made clear he will not support it in its current form.

“Just pass something so that we can start telling voters what’s in it instead of fighting about it,” said Sean McElwee, director of the progressive think tank Data for Progress.

Chris Taylor, a spokesman for the Democratic Congressional Campaign Committee, said the party’s candidates would also be highlighting projects in their areas that are being fixed with money from the $1 trillion infrastructure bill.

But those messages could run up against voters’ concerns over inflation.

A December Monmouth University poll found that 15% of Americans said their biggest concern was paying everyday bills, while 14% said inflation specifically, with only COVID-19 ranking higher, at 18%. But pollsters pointed out that the jump in concern about inflation was most dramatic among Republicans, indicating that partisan polarization may be playing a role on the issue.

In a Reuters/Ipsos poll in early December, 60% of adults said the country is on the wrong track, while only 24% said it is on the right track.

Democrat consultant Scott Falmlen said Biden has about six months for conditions to improve. If kinks in the global supply chain are worked out, gas prices moderate and the coronavirus infection rate slows by next summer, he said Democrats should be in a stronger position going into the midterms.

“People want to have a real sense that we are overcoming this,” he said. “We need to see a light at the end of the tunnel and know it’s not another freight train headed our way.