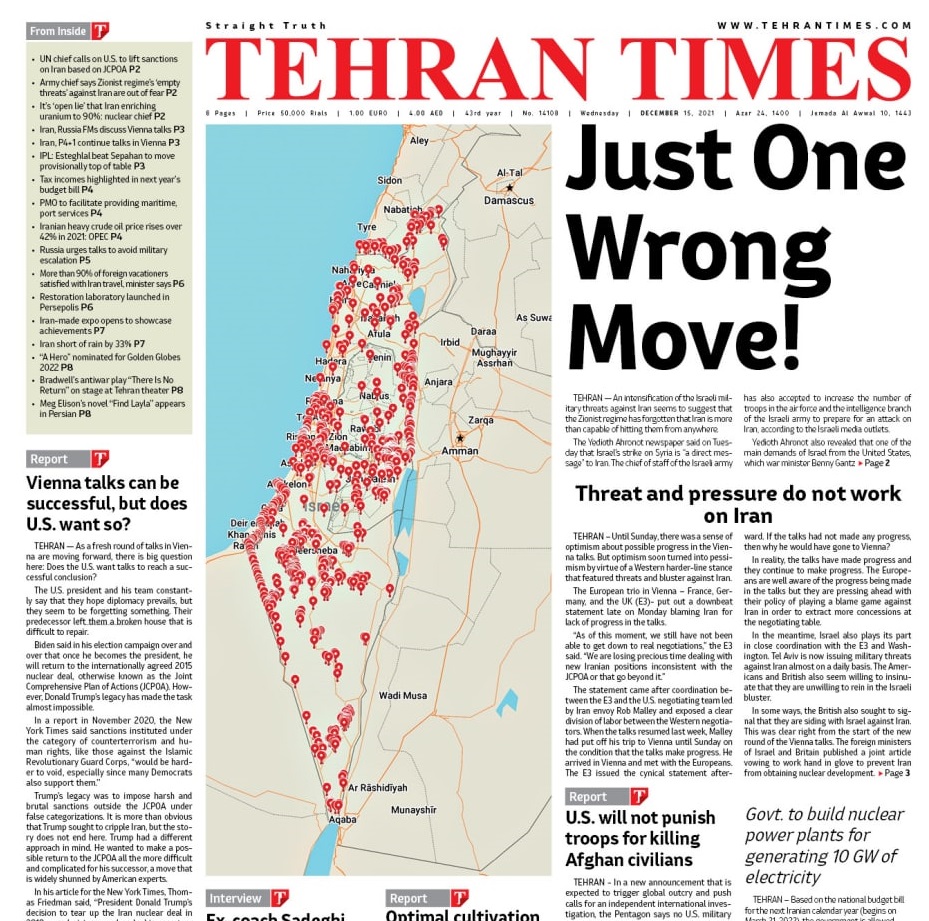 “An intensification of Israeli military threats against Iran seems to suggest that the Zionist regime has forgotten that Iran is more than capable of hitting them from anywhere,” began an article published Wednesday in the Tehran Times, a newspaper identified with the Iranian regime.

The article ran under the headline “Just One Wrong Move!” and featured a “map of Israeli targets,” which showed nearly every populated community in the country labeled with a red dot.

The article discussed recent reports that strikes against Syria’s chemical weapons facilities in March 2020 and June 2021 had been “a direct message” to the Islamic Republic, as well as reports that IDF Chief of Staff Lt. Gen. Aviv Kochavi wanted to increase the number of IAF permanent bases.

The article quotes head of the Iranian military, Maj. Gen. Mohammed Bagheri, who said that Iran “never underestimates” threats from an enemy.

“Despite our confidence in the deterrence situation… We are prepared for the smallest of threats in the strategic field,” Bagheri said.

Bagheri also told the Tehran Times that while Iran “does not intend to strike anyone,” it was prepared at the “operational and tactical level” for a “decisive response and quick and tough offensive.”

The article also discussed an announcement by the IDF on Dec. 8 that it would hold a large-scale drill over the Mediterranean. The paper described the planned drill as an exercise in preparation for an attack on Iran.

The article also discussed the nuclear negotiations underway in Vienna, which it described as an attempt to find ways of removing “illegal sanctions” on Iran, and noted that new German Chancellor Olaf Scholz, who spoke with Prime Minister Naftali Bennett by telephone on Tuesday, has shown a “tougher stance” against Iran than his predecessor, Angela Merkel.

The article ended with the threatening words: “Keep your hands off!”