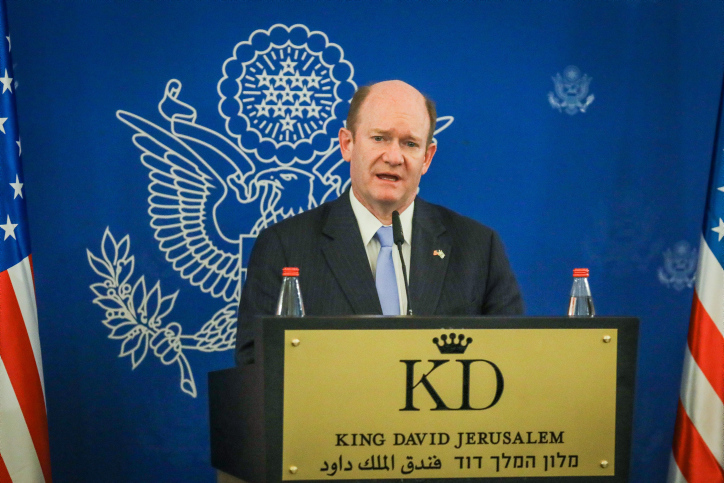 A group of U.S. lawmakers on a visit to Israel has asked for clarification of the designation of six Palestinian NGOs as terrorist entities, The Times of Israel reported on Wednesday.

Speaking at a press conference in Yerushalayim, Senator Chris Coons (Democrat, Delaware), leading the bipartisan delegation, said that they have sought information Israel says it has proving the NGOs links to the Popular Front for the Liberation of Palestine, a secular, leftist political movement that has carried out deadly attacks against Israelis.

“It’s been offered, and it will be reviewable by members of Congress by about the time we return next week,” Coons said.

The Israeli decision last month triggered a wave of condemnation in Europe, where countries insisted the Palestinian groups are not terrorist fronts and said they would continue funding them.

An Israeli envoy was reportedly sent to Washington to brief the Biden administration on the evidence.

Coons also said that the issue of building in Yehuda and Shomron was discussed in all their meetings with Israeli leaders, but would not elaborate.

Prime Minister Naftali Bennett met with the delegation on Tuesday. In a tweet on Wednesday morning, Bennett noted the “excellent meeting” with the bipartisan delegation.

They also were in Ramallah on Wednesday for a meeting with Palestinian Authority Prime Minister Mohammad Shtayyeh.

“The issue of the consulate came up in each of our meetings,” said Coons, stressing that “it is important for the United States to continue to have an open dialogue with the Palestinian Authority.”

Bennett and Foreign Minister Yair Lapid have openly opposed the planned reopening of the consulate for Palestinians in Yerushalayim, which has become a source of tension in the bilateral relationship. According to law, Israel must give its approval before the plan can go forward.

Coons, the chairman of the powerful Senate Appropriations Subcommittee on State and Foreign Operations, emphasized that the Senate appropriations bill for fiscal year 2022 includes $3.3 billion for Israel, and $225 million in support for Palestinians. The bill also specifically calls for support for the Abraham Accords.

Coons stressed that Biden administration officials have consistently been fully supportive of expanding the Abraham Accords in their communications with the Senate.