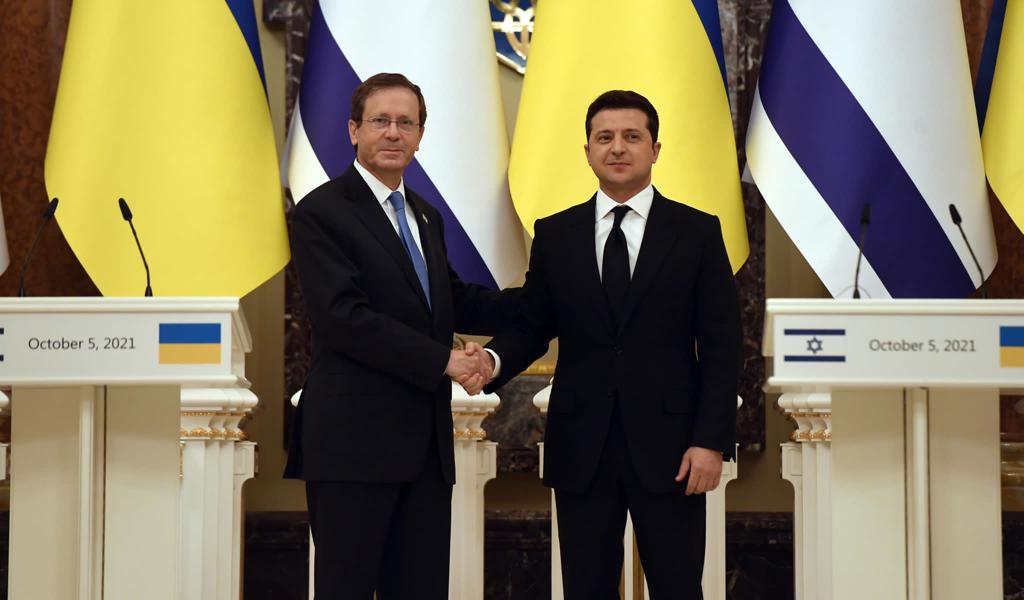 President Yitzchak Herzog arrived in Kiev on Tuesday for his first visit to the Ukraine as President, at the invitation of Ukrainian President Volodymyr Zelenskiy.

The president discussed the history of Ukrainain Jewry, saying that “Some of the greatest Jewish figures were born and raised here – religious and spiritual leaders, statesmen, Zionist thinkers and notable cultural heroes.”

However, Herzog said, the Jewish people also had a “difficult and painful history” in Ukraine, having been subjected to rioting and pogroms in earlier centuries, as well as the infamous Nazi massacre at Babi Yar.

Herzog thanked Zelenskiy for making legislation opposing antisemitism a priority and said he hoped the bill would pass soon.

“We must learn from history; the whole of humanity, and Europe in particular, cannot tolerate any form of antisemitism — not at protests, not in the erasure and denial of history, and not in the glorification of murderous figures from the past.”

In addition, Herzog noted that Ukraine had elected not to participate in the recent 20th anniversary event to commemorate the 2001 Durban Conference. Ukraine was one of over 30 nations that agreed to Israel’s request to skip the event.

President Volodymyr Zelenskiy said “I am pleased to welcome Your Excellency, President Isaac Herzog, and members of the Israeli delegation on Ukrainian soil. It is very symbolic that your first visit as President is to us, here in Ukraine. I see this as a symbol and a great honor. Israel is a friend and partner of ours in everything concerning diplomacy, trade, security, politics, and humanitarian issues. I am very grateful to the Israeli delegation, which has come to mark 80 years since the tragic massacre at Babi Yar. The memory of the victims is sacred for us, for every Ukrainian. With the President of Israel, we spoke about how a tragedy like the Holocaust must never happen again. I am confident that our meeting will strengthen the partnership between us.”

Earlier, Herzog laid a wreath at the Grave of the Unknown Soldier and at a memorial to the victims of the Great Famine.