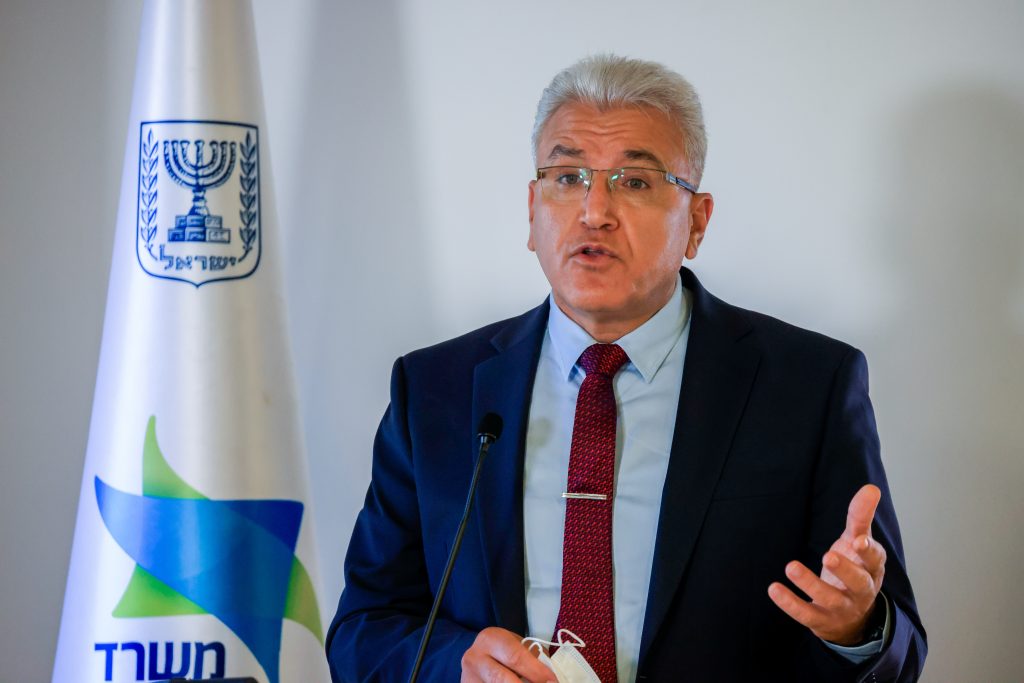 Although the government seemed to be heading into Rosh Hashana with more restrictions but no lockdowns, the chances of coronavirus rules impinging on the Yomim Noraim rose on Thursday along with record-breaking infection levels.

Coronavirus commissioner Salman Zarka appealed for tefillos to be held only outdoors on Rosh Hashana and Yom Kipper, to minimize the spread of the virus.

The Health Ministry “recommends that the public opt for prayers outdoors rather than in synagogues,” he told reporters in a briefing.

The ministry also said on Thursday morning that the country had 11,187 new cases, slightly more than the day before, and the most ever since the pandemic started.

At the same time, the number of serious cases dropped to 666 from Sunday’s figure of 753. This was likely due to the booster drive, which is thought to be more effective in preventing serious illness than in preventing infections.

Some 6 million Israelis have received the first shot of the vaccine, and 2.3 million have gotten the third booster shot, the ministry said.

Meanwhile, school openings, in their second day, continued to give cause for concern.

The Coronavirus National Information and Knowledge Center warned that the expected uptick from the schools could necessitate closing the educational system again, at least partially.

However, Prof. Nadav Davidovitch, director of Ben-Gurion University of the Negev’s School of Public Health and a member of the expert committee advising the ministry on the crisis, expressed optimism that the coronavirus could be held in check during this period.

“The R rate has been going down, and we expect a further decrease by next week,” he told The Jerusalem Post. “We expect there is going to be a 5% to 10% increase in the number of daily cases, but keeping schools closed would have had much worse consequences.”

Parents and educators in Israel and the U.S. have stressed the academic losses and emotional fallout for children having to study from home have been very serious and should be avoided if possible.

In addition, he pointed out that keeping children at home was hardly foolproof. “We have to remember that even if they are not in school, children are still somewhere, and they can get infected and infect,” Davidovitch noted.

Davidovitch believes that vaccines and restrictions will be sufficient to hold down the number of serious patients. He noted that had been predicted that Israel would have over 2,000 such patients by the beginning of September, which has not happened.

Israeli researchers said on Wednesday that about 25 percent of children under the age of 6 in Israel were behaving more violently during the coronavirus pandemic than they had in previous years.

The study was conducted by the Hebrew University, University of Haifa, and Reichman University (formerly the Interdisciplinary Center) in Herzliya, and reported on by Channel 13 news.

The research also showed that 43% of kids spent more time in front of screens, and 36% were eating more candy than usual.

Getting back to a post-lockdown normal has also been challenging. Nearly half, 45%, of kids under 6 required help from their parents to reconnect with their friends after lengthy COVID lockdowns and last year’s remote learning.

Some 37% of kids had more learning difficulties amid the pandemic, and 34% needed emotional support, the research said.