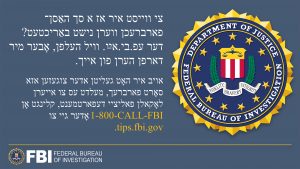 The FBI’s New York Field Office is publishing Yiddish and Hebrew posters and ads encouraging members of the Jewish community to report hate crimes they may have witness or experienced, amidst a surge in attacks against Jews.

William Sweeney, the assistant director of the FBI’s New York Field Office, told CBS News that hate crimes often go unreported due to language or cultural barriers, and he hopes addressing the Jewish community in two widely spoken languages unique to them will encourage people to come forward.

“I don’t think the data that we have is an accurate representation of everything that is happening out in our communities,” Sweeney said. “One of the things we’ve been trying to push to do is to get a message out to those communities to report to us and to report to their local police departments, in particular, some of that information so that we can better address the problem.”

The FBI team decided to translate their posters into several languages after meeting with representatives from Jewish and Asian American communities, who have been the victims of the majority of hate crimes in New York City.

The meetings, which focused in part on how authorities could better communicate with the communities, led the FBI to make posters in Yiddish and Hebrew, and they are working on a system that will allow people to report hate crimes in those languages or whatever language they are most comfortable with.

The Anti-Defamation League said there was a 47% increase in reported antisemitic hate crimes in New York during and following the 11-day Operation Guardian of the Walls between Israel and Hamas. Multiple suspects have been arrested for their verbal and physical assaults against Orthodox Jews, as well as hateful vandalism.

The NYPD has increased its presence in Brooklyn as a security measure, and city officials and mayoral candidates have strongly condemned the hate crimes.