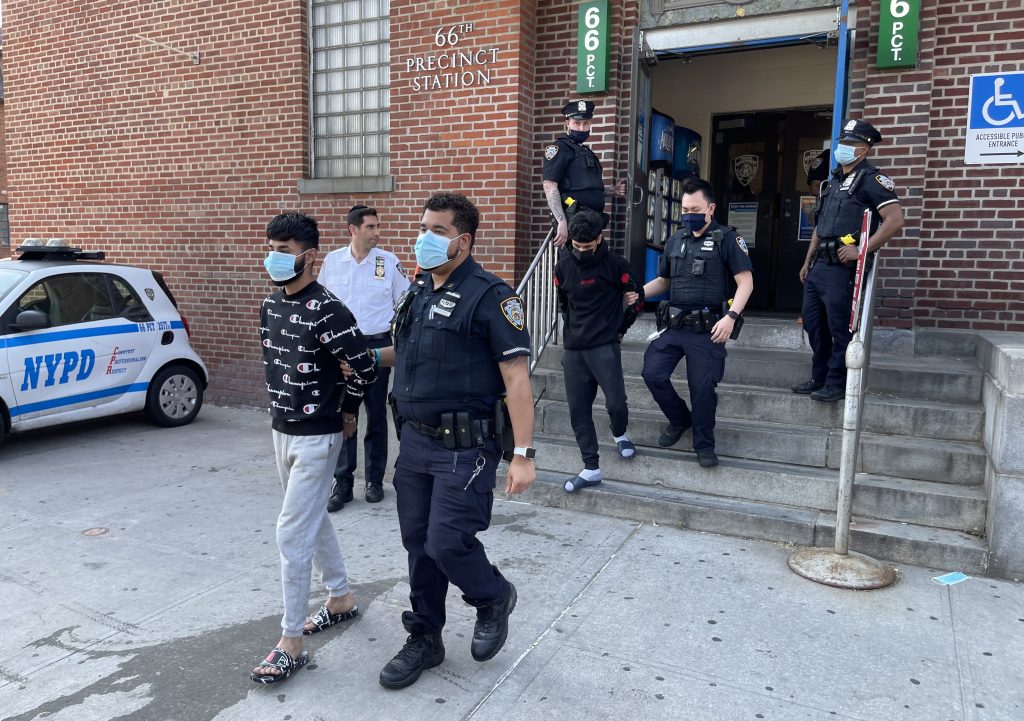 Three men accused of perpetrating two antisemitic incidents in Brooklyn on Shabbos evening have been arrested and charged with hate crimes.

At 7:45 p.m. Shabbos, two Jewish teenagers were walking on Ocean Parkway at 18th Avenue when two men exited a blue Toyota Camry and demanded that the teens say, “Free Palestine,” according to the NYPD and the Brooklyn District Attorney’s office.

As the victims ran away, one of the assailants retrieved a cricket bat from the Camry’s trunk. Then the two assailants, as well as a third man who had been driving the Camry, began chasing the victims.

Assemblyman Dov Hikind reported that the victims were rescued by a Muslim Uber driver.

Shortly after this incident, the same perpetrators are believed to have driven their Camry to the Agudah shul at 16th Avenue and 49th Street in Boro Park. There, two men spat at and threatened Jewish men outside the shul, shouting “Free Palestine,” “Kill you Jews” and “Kill all the Jews.” When the Jewish men ran inside the shul and locked the door, the perpetrators banged on the door. Before leaving the scene, they broke the mirror of a nearby car. A third man drove their Camry and also yelled antisemitic statements.

On Tuesday, 20-year-old Danial Shaukat of Bensonhurst turned himself into police. As he was led out of the 66th Precinct stationhouse in Boro Park, reporters shouted questions at Shaukat, asking whether he was sorry. Shaukat responded, “Sorry.”

He was arraigned on charges including third-degree assault, attempted assault, menacing, and criminal obstruction of breathing, as hate crimes; as well as aggravated harassment and harassment. Bail was set at $2,500 cash/$5,000 bond.

The two others were arrested Wednesday.

Haider Anjam, 20, of Midwood, was picked up by the NYPD warrant squad; and Ashan Azad, 19, of Midwood, turned himself into police. Neither Anjam nor Azad responded to shouted questions by reporters as they were led into a police vehicle outside the 66th Precinct stationhouse.

Anjam was arraigned Thursday on charges of third-degree assault, attempted assault, and menacing, as hate crimes; as well as criminal mischief, aggravated harassment and criminal obstruction of breathing. Bail was set at $2,500 cash/$4,000 bond.

Azad was expected to be arraigned later Thursday. His arrest charges were aggravated harassment as a hate crime, and harassment.

These incidents were among a rash of attacks against Jews by supporters of Palestinians in New York and elsewhere, that began during recent hostilities in Israel and Gaza. The assaults and harrassment continued even after Israel and Hamas agreed to a ceasefire on Thursday.

In response to these incidents, Mayor Bill de Blasio and police officials, including NYPD Chief of Department Rodney Harrison, had on Friday met with Jewish community leaders and promised increased police patrols. But the extra police presence did not materialize on Shabbos, which the mayor and chief accepted responsibility for.

By Sunday, there was a notable presence of police officers and officials in neighborhoods like Boro Park, Midwood and Williamsburg.