Two women were killed, Hy”d, and two others were seriously wounded by rocket fire in Ashkelon on Tuesday afternoon.

Their homes scored direct hits in the recent barrage. 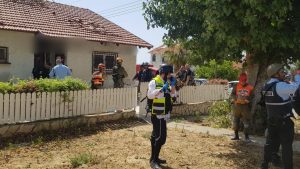 The cities of Ashdod and Ashkelon sustained at least eight direct hits from rockets on Tuesday afternoon after Gaza terrorists fired dozens projectiles in minutes in what Hamas said was “largest barrage ever.”

Sirens were heard in an almost unbroken stream since midday.

This was the first time since the coastal city was targeted by rockets the start of the current round of fighting between Israel and the terror groups in Gaza.

Two of the direct hits occurred in Ashdod and six in Ashkelon, including a school. Four people, including a young girl, were lightly hurt in Ashdod after suffering shrapnel wounds. Magen David Adom teams also provided treatment to a man in his 40s, who was lightly injured while running for the bomb shelter.

More than 300 rockets have been fired from the Gaza Strip since Monday evening. The IDF has responded with airstrikes on dozens of targets in Gaza, in what it has dubbed “Operation Guardian of the Walls.”

The massive bombardment came shortly after the Islamic Jihad confirmed two of its military wing’s senior officials were killed in an IDF strike on an apartment in a multi-story residential building. Palestinians reported the apartment belonged to Mohhamad Salim Abu Al Atta, the brother of a Islamic Jihad commander killed by Israel in 2019. He appears to have been seriously wounded in the strike. In an unusual move, Hamas also announced Tuesday morning that several people were killed and some were missing after an IDF attack on a building used by its members.

Terror group Hamas’ military wing announced, “We have now fired one of the heaviest barrages at Ashdod and Ashkelon, in response to an IDF attack on civilians. The next barrage will be even bigger.”

IDF Chief of Staff Lt.-Gen. Aviv Kochavi earlier Tuesday ordered the reinforcement of the Gaza Division with infantry and armored brigades along with the continued redeployment of intelligence and air units.

Kochavi also ordered the continued striking of Hamas and Palestinian Islamic Jihad weapons and storage sites as well as the expanding of the strikes to other targets including operatives of the terror groups.

“The IDF will continue to act resolutely to restore security to the residents of the south, and all commands must prepare for the expansion of the campaign, with no time limit,” the IDF said in a statement.

Three Israeli Arabs Arrested for Plotting to Join IS

Over 20,000 Russian Jews Immigrated to Israel Since Ukraine War

‘For Your Miracles Which Are With Us Daily’