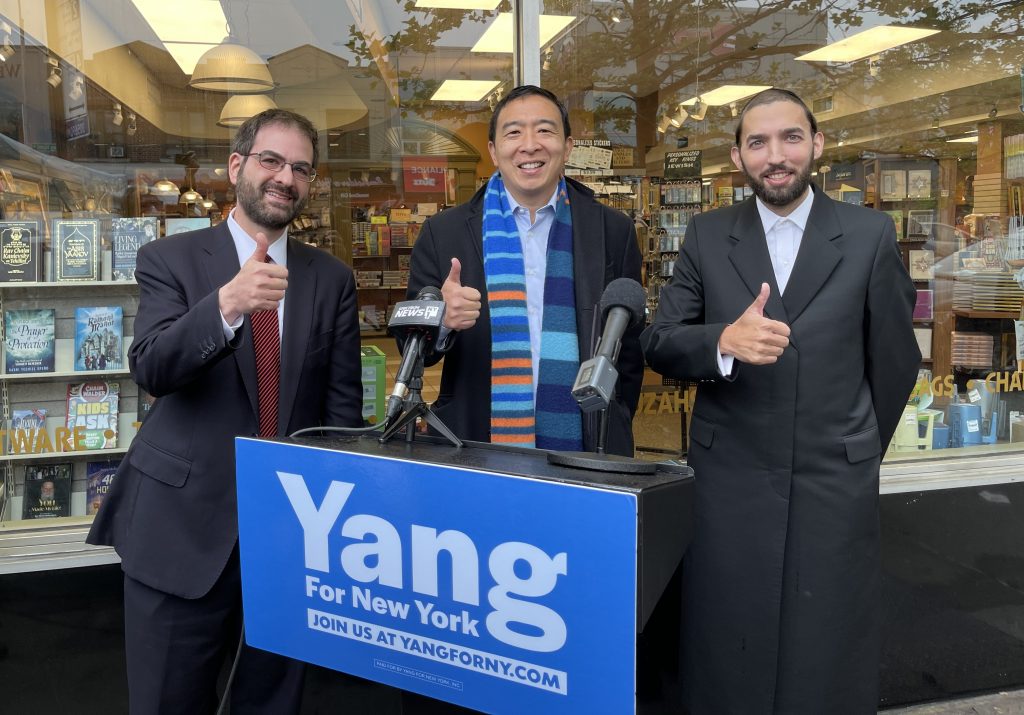 “I believe that Andrew Yang has the smarts and the skills to tackle the issues and the crises of today,” Eichenstein said, at a press conference in front of Eichler’s Judaica store on Coney Island Avenue in Midwood. “I also know that Andrew Yang recognizes the uniqueness of every community in this city, and Andrew understands that the Orthodox Jewish community is part of the beautiful mosaic that is New York City.”

Yang has aggressively courted the Orthodox community, strongly opposing the Boycott, Divestment and Sanctions (BDS) movement against Israel and vowing to allow yeshivas independence in formulating secular-studies curricula, saying that “the outcomes” for yeshiva students “are the same or better” as those in public school.

Asked about the yeshiva issue again Wednesday, the candidate said that “to the extent there are issues in individual schools, I think we have to come together with the community and say, ‘Look, like, is there something we can do to help?’ But I do think that any issue should be taken in the larger context” of yeshivas’ overall success.

While the yeshiva-independence issue has emerged as perhaps the single biggest for the Orthodox community in this year’s mayoral election, the community is grappling with other concerns, including a general rise in anti-Semitic incidents during the past several years. The community believes government did not afford religious liberties appropriate deference when it severely restricted attendance at houses of worship during the Covid pandemic, even while allowing many businesses to remain open and large Black Lives Matter protests to be held. (These restrictions on houses of worship were eventually tossed by federal courts, including the U.S. Supreme Court). And the community felt targeted by government when, with Covid rates rising in the fall, its neighborhoods were placed into color-coded restrictive zones. Subsequently, when the city gave vaccine priority to a the “hardest-hit” neighborhoods, the Orthodox Jewish neighborhoods were not on that list.

“When positive test percentages inched higher in one neighborhood,” Yeger said at Wednesday’s press conference, “they got resources and help. Our neighborhoods got red zones and scoldings. Some neighborhoods got acknowledgement of the financial distress they were facing, the economic hardship they were facing, the educational hardship their children face. We got inspectors from an alphabet soup of city agencies marching through with ticketbooks.”

“It was long ago said that if you don’t have a seat at the table, you’re probably on the menu,” said the Councilman. “We’re tired of being on the menu. We want to be a part and partner of this great civic experiment that is New York City. And the one candidate we believe gives every New Yorker that partnership is Andrew Yang.”

The press conference was initially to be held on Sunday this week, but with the worldwide Jewish community in mourning after 45 people died at a Lag BaOmer celebration in Meron, the endorsement announcement was postponed to Wednesday. Yang opened his comments Wednesday by acknowledging “heavy hearts that so many people in New York feel right now … it’s heartbreaking that people who had so much in front of them had their lives lost in such a tragic way.”

With Wednesday’s endorsement of the two electeds representing Boro Park and Midwood, Yang has locked up much of the support from the Orthodox establishment. The candidate was endorsed in a Yiddish ad last week by activists and administrators from a number of Borough Park Chassidic groups and yeshivas including Belz, Bobov, Bobov-45, Munkatsch, Pupa, Rachmastrivka, Sanz-Klausenberg, and Satmar. A new, English ad ran in Orthodox papers this week with additional endorsements including from Aleksander, Ger, Vizhnitz and the Cheder.

In March, Yang was endorsed by Queens Assemblyman Daniel Rosenthal, in the first endorsement by an Orthodox elected official.

One prominent Orthodox elected who, as usual, has not endorsed a candidate, is Brooklyn State Sen. Simcha Felder. Asked by Hamodia on Wednesday whether he would be making an endorsement in the race, Felder took a shot at the current mayor but indicated he would not be breaking his no-endorsement custom anytime soon, if at all.

“Since Mayors Giuliani and Bloomberg improved safety, security, and quality of life for New Yorkers, we have not had a mayor that prioritized these values,” Felder said. “Unfortunately, Mayor de Blasio did a great job destroying our city. Now we must be diligent and responsible in making sure we elect a mayor who promotes safety and security, respects all communities and their educational choices, and has the management skills to run this city. Because it is so important to find the right person for this position, I must be completely certain and confident that whoever I endorse has the skills, qualities and commitment necessary to bring our city back.”