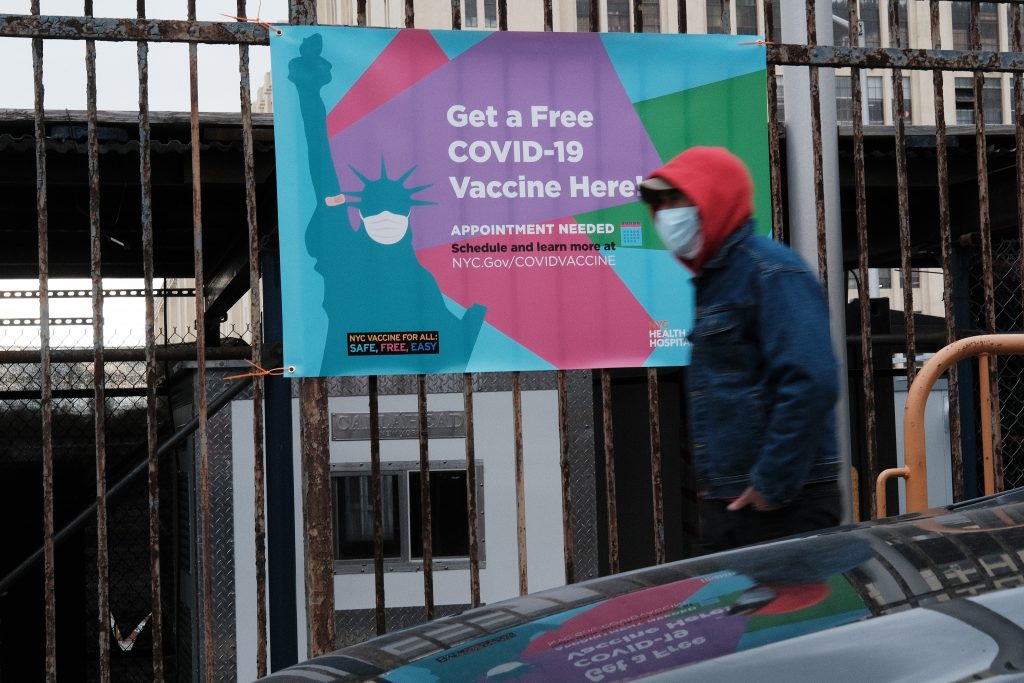 New York City issued an updated list of the neighborhoods “hardest-hit” by the COVID-19 pandemic, which will receive vaccine priority ­— a list that still does not include Jewish neighborhoods of Boro Park, Midwood or Gravesend.

After the initial list of 27 neighborhoods was compiled, officials representing several Orthodox Jewish neighborhoods expressed displeasure at their areas being left off that list, particularly as those neighborhoods – like Boro Park, Midwood, Gravesend and Williamsburg — had publicly experienced an uptick in COVID cases in the fall, with Gov. Andrew Cuomo creating special “micro cluster zones” with extra restrictions largely in those neighborhoods.  (The list of “hardest-hit” areas does include the 11205 and 11206 zip codes, which largely cover the neighborhoods of Bushwick and Bed-Stuy and also encompasses a small portion of the Greater Williamsburg Jewish community, But the main Jewish Williamsburg zip code, 11211, is not on the list. During the fall, the Williamsburg area was generally on a borderline “watch list” but did not cross the threshold for significant extra restrictions.)

“Let me get this straight,” State Assemblyman Simcha Eichenstein, whose district includes Boro Park, tweeted in December, “When it comes to lockdowns, Brooklyn’s Orthodox Jewish neighborhoods are considered hardest hit. Yet for vaccine distribution and relief services suddenly we’re not even in @nycgov’s top 27 neighborhoods?”

The initial list had been compiled months ago, and City Hall told Hamodia then that the list was largely based on death rates from March and April, and also reflects that people in those 27 neighborhoods are likely to be people of color and below the poverty line, and have a higher prevalence of underlying issues like diabetes and hypertension, which contribute to ongoing vulnerability. As the vaccine rollout began in earnest, Mayor Bill de Blasio, in response to reporters’ questions at press conferences, had said his administration would be updating the list based on the entirety of the pandemic.

On Sunday, the new list was released, totaling 33 areas. The six new areas include four in Queens — Queens Village; Kew Gardens/Woodhaven; South Ozone Park/Howard Beach; and Jackson Heights/East Elmhurst — the Williamsbridge/Baychester area of the Bronx; and in Brooklyn, only the 11226 zip code, which covers the area south and southeast of Prospect Park. (City Hall is officially categorizing 11226 as “Midwood” – but this list does not include the Midwood/Gravesend zip codes of 11210, 11230 and 11223 that were virus hotspots in the fall, and subject to increased restrictions.)

The list of the original 27 “hardest-hit” neighborhoods is available at https://www1.nyc.gov/site/neon/programs/covid-neighborhoods.page

The list was compiled by de Blasio’s Task Force on Racial Inclusion and Equity, as well as the City Health Department.

According to City Hall, the 33 neighborhoods represent 4.2 million New Yorkers, or roughly half the city population, but will have more than 60 percent of all vaccination sites.

Asked by a Hamodia reporter about the specific data used to compile the list, the mayor replied that “the first factor, of course, was the severity of the COVID impact, and the most crucial factor was, tragically, loss of life.”

While some of the aforementioned Jewish neighborhoods suffered from high COVID rates, they did not necessarily have high death rates. For instance, Boro Park’s main zip code of 11219 had the second-highest rate of positive antibody tests (43.2%) in the city, but 90 other zip codes had a higher death rate than its 236 deaths per 100,000 residents.

“Other factors considered,” the mayor continued, “were the amount of health care people have historically received and the kinds of factors that affect whether people are going to be vulnerable to disease. We know, and we’ve seen it not just during the coronavirus, but previously — very consistent indicators of vulnerability because of poverty and other factors. So, this list is where people are in greatest danger proportionately … that we need to focus on to save lives.” Administration officials said some other factors included a history of social inequities, housing conditions, chronic conditions and comorbidities that make people more vulnerable to COVID.

In statements to Hamodia, elected officials representing Boro Park and Midwood expressed dismay at being left off the new list.

“The double standard has never been more blatant,” said Eichenstein. “For nearly a year, all we have heard from our executive leadership is that neighborhoods like Boro Park and Williamsburg are hardest hit. Today’s announcement makes clear yet again that they were either lying throughout or were just trying to justify their excess enforcement. Time and time again, when it comes to crackdowns and enforcement, government knows exactly where to find us; but when it comes to services and prevention, government readily pushes our communities to the wayside. Still wondering why there’s no trust in government? All they do is pull bait and switch maneuvers in a blatant, discriminatory fashion.”

Councilman Kalman Yeger said, “For months, government officials went to great lengths to draw red lines around predominantly Jewish neighborhoods, to shine lights of division and derision on us, all the while telling us it’s for our own good because government is here to help. And now that vaccines are here, official government policy is once again structured around discriminating against our community. It’s a disgusting double-standard, but sadly so typical.”

The updated list of “hardest-hit” neighborhoods was released on the same day the administration publicized data showing that black and Latino New Yorkers have been vaccinated at a disproportionately low rate, while whites have received the vaccine at a disproportionately high rate. De Blasio said this disproportionality has been caused by “a lot of different factors,” among them that “we’ve got a profound problem of distrust and hesitancy particularly in communities of color.”