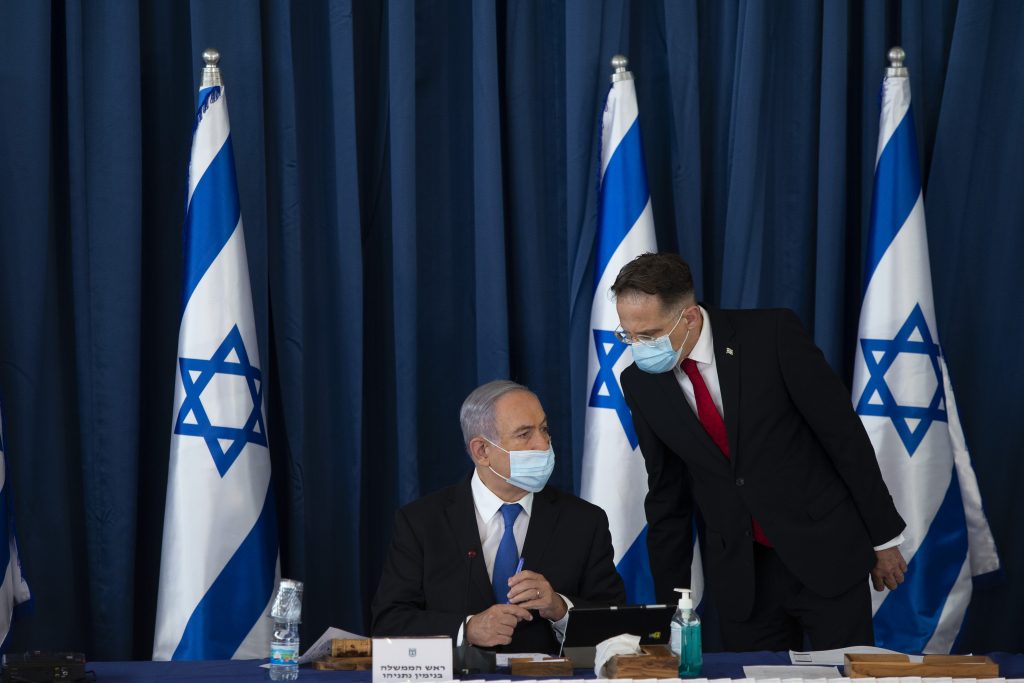 Leaked recordings from Tuesday’s cabinet meeting on Wednesday confirmed media reports the previous day of a scene of pandemonium, shouted accusations and threats.

The confrontation over the appointment of a new justice minister was conducted at the top of their voices by Prime Minister Binyamin Netanyahu‏‏, Defense Minister Benny Gantz and Attorney General Avichai Mandelblit, among others.

“Don’t think that this vote will pass, it is an illegal vote!” roared Mandelblit at the Zoom meeting, in recordings broadcast by the Kan public broadcaster.

“The vote I am bringing is illegal? That’s absurd,” Netanyahu shot back, and then went ahead with the vote to make Likud MK Ofer Akunis justice minister rather than Gantz, who was demanding that he be appointed.

A furious, outvoted Gantz told the ministers: “You can do whatever you want with your political power — you are 17 (cabinet members) and we are 10. It doesn’t matter what I want anyway.

“For me, this debate and this illegal move are over. I will not be a partner to illegal actions,” Gantz said. “I’ve had enough!”

Mandelblit rejected this out of hand, insisting that the coalition deal remains binding until a new government is sworn in. He said the swearing-in of a new Knesset does not nullify the agreement.

You are playing games, and it’s not clear to me why,” Gantz snapped at Netanyahu.

After Gantz’s candidacy was voted down 17 to 10, Netanyahu then stunned the ministers with his nomination of Akunis. He instructed Tzachi Braverman, the cabinet secretary, to call the vote.

At that point, Blue and White MK Pnina Tamano-Shata told Braverman not to listen to Netanyahu. “You’re the cabinet secretary, not the Likud secretary,” she said, outshouting Likud’s Miri Regev, who was taking Netanyahu’s side.

Braverman replied that he was “subordinate to the prime minister, who’s running the meeting,” and proceeded with the vote.

When the voting was over, Mandeblit declared it null and void and that by law Akunis had not been appointed justice minister.

“No one will understand your explanation as to why the vote on Gantz was valid but the vote on Akunis wasn’t,” Netanyahu said.

“Don’t worry,” Mandelblit answered, “the High Court will understand me.”

With the High Court set to decide on the matter Wednesday afternoon, and clear signs that they did indeed “understand” Mandelblit, Netanyahu later backed down and agreed to appoint Gantz as justice minister.