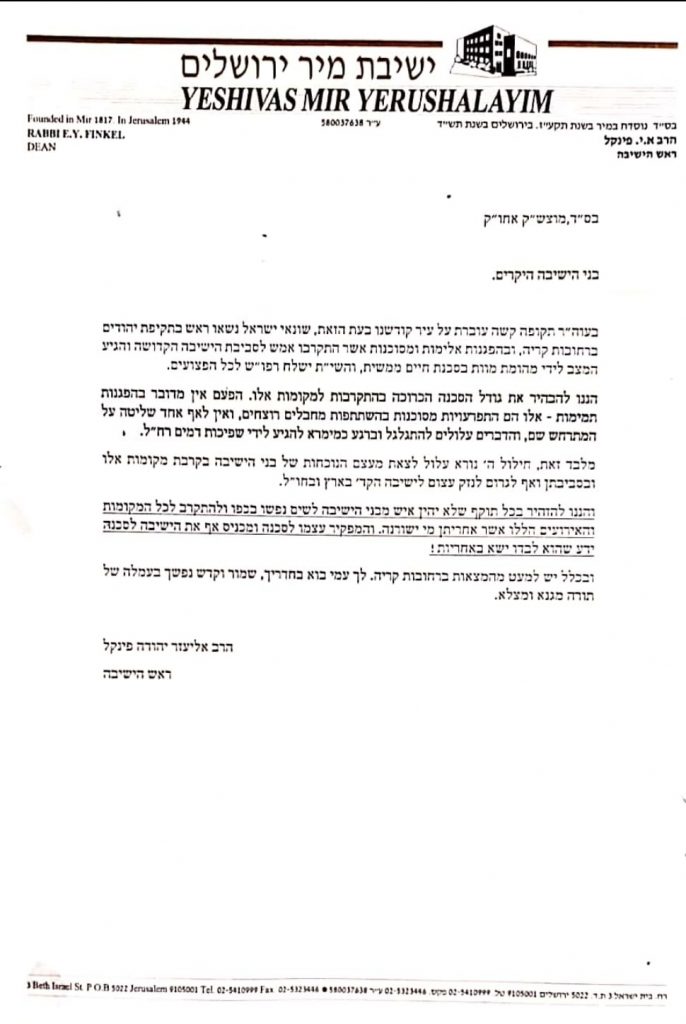 Following the ongoing riots of the Arabs in East Yerushalayim and the fact that young Arabs have set themselves the goal of harming chareidi Jews, Rosh Yeshivas Mir in Yerushalayim, Hagaon Harav Eliezer Yehuda Finkel, shlita, issued a special warning letter to the students of the yeshivah.

The riots have reached the area of Beis Yisrael neighborhood, in the vicinity of the Mir yeshivah.

In a letter published Motzoei Shabbos, the Rosh Yeshivah writes: “Dear members of the yeshivah. Due to our aveiros, a difficult period is passing over our Holy City at this time, haters of Jews attack Jews in the streets, and violent demonstrations have reached close to our yeshivah.

“We must note the magnitude of the danger involved in approaching these places,” writes the Rosh Yeshivah, “[which are] not just innocent demonstrations – these are dangerous riots involving murderous terrorists, and no one has control over what happens there, and things may advance, as soon as a mimic attacks, to the stage of shefichus damim, R”l.

“Besides, the terrible chillul Hashem that may result from the very presence of yeshivah students in the vicinity of these places can even cause enormous damage to the yeshivah in Israel and abroad.”

Harav Finkel adds a warning: “We strongly warn that no one of the yeshivah talmidim should take his life into his hands by approaching any of these places and [getting involved] in events, and his culpability shall be judged. And anyone who abandons himself to danger or even  puts the yeshivah in danger knows that he alone will bear responsibility!

“And in general it is preferable to stay indoors in these times,” he concludes his letter.