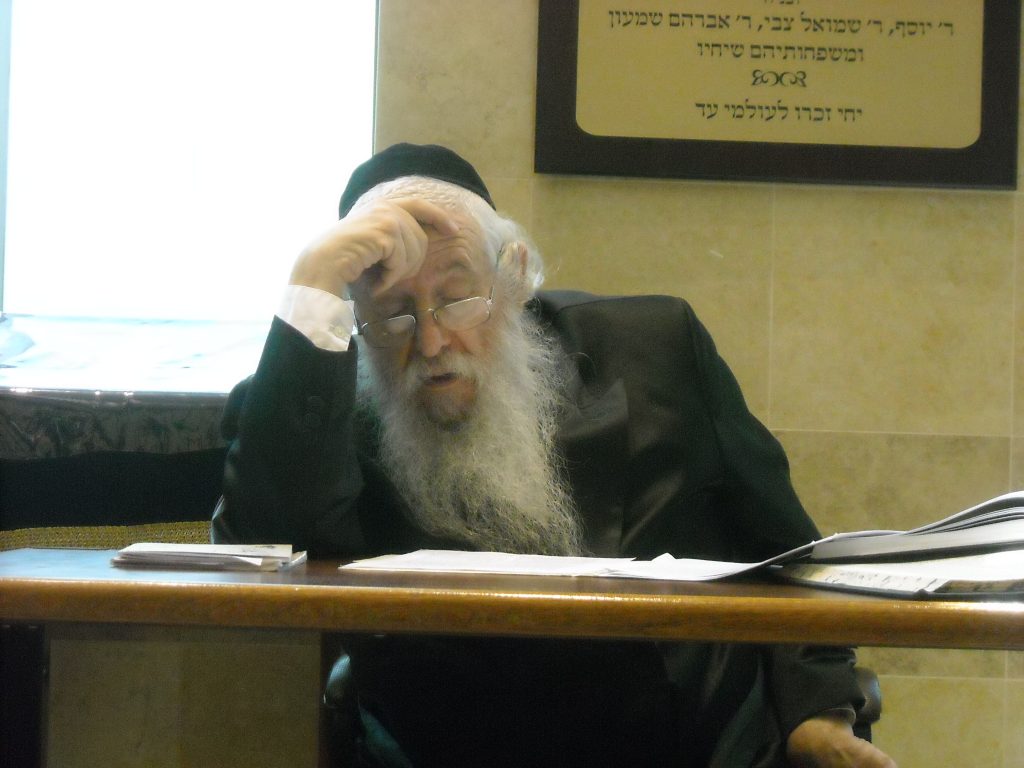 Four decades ago, the Novominsker Rebbe, zt”l, opened a yeshivah which has been mechanech thousands of talmidim, many who have gone on to become marbitzei Torah themselves. On the occasion of the Rebbe’s first yahrtzeit, 13 Nisan, Rabbi Dovid Kresh, shlita, the Menahel of the mesivta, shared with Hamodia the vision the Rebbe had when he founded this makom Torah, and the guidance the Rebbe offered as it became one of the premier yeshivos.

Could you give us an idea of what type of ruach the Rebbe worked to put into the yeshivah? How did he see the yeshivah’s mission?

At the first meeting I had with the Rebbe, zy”a, I asked him what the goal of the yeshivah was. He answered me that he wants to create a yeshivah where every type of bachur who wants to learn Torah should feel comfortable. He enjoyed “all the colors of the rainbow” when it happened, and for him it was taam Gan Eden to see Yiddishe kinderlach getting along and sitting side by side. There was never any politics, and one of the rules of the yeshivah is that mesorah is a private thing that every boy has. The tzad hashaveh in yeshivah is that we are all here to serve Hashem.

The second point was that he wanted the highest ramah we could achieve in Torah, but he very much wanted a Chassidishe ruach. This meant to stress ahavas Yisrael, kedushas haShabbos, tefillah, all other aspects of avodas Hashem. We do not stand solely on a blatt Gemara, because there is much more to Yiddishkeit, and he wanted everybody to develop a chashivus for it. His shmuessen were oriented to bringing out how breit Yiddishkeit is, and doesn’t stand on only one thing.

What were the ikrim that he demanded and the topics he spoke about regularly?

He wanted every talmid to know that we are here for one mission, and that is avodas haMelech. We are not here to build ourselves, nor to build Novominsker Chassidus; we are here to spread the light in the world. This is how he lived, and this is what he wanted.

Did the Rebbe try to mold the talmidim into a certain tzurah or image of what he wanted a Novominsker talmid to embody, or did he encourage their independence and allow them to follow their individual techunas hanefesh, whether in limud or other inyanim?

The Rebbe was a very breite mentch, and he understood that not every bachur had the same techunas hanefesh in learning as well. Although the shiurim in yeshivah are very deep, he understood a bachur who wished to supplement this with yedios in other chalakim of the Torah.

What advice and guidance did the Rebbe offer for a bachur who was not succeeding or reaching expectations? Was there a particular mehalech?

I once asked the Rebbe, “Since chinuch is such an important part of Yiddishkeit, why is there so little written about it in Chazal? We find ‘Lo habayshan lameid, velo hakapdan melameid,’ but all in all, there are not many written rules.”

The Rebbe responded, “Mistama hut ihr ah terutz,” to which I responded that I think Shlomo Hamelech in Mishlei (22:6) said it all in one rule: “Chanoch lanaar al pi darko.”

The Rebbe tried to find a pintele, a small point which would open up the bachur’s ears, whether it was how important it was for their future, what the beauty of being a talmid chacham is, what it means to be an oved Hashem, lehisaneig al Hashem, kirvas Elokim li tov … He stressed to notify a bachur what he is missing if he does not learn.

The Rebbe got much credit for building a yeshivah and then largely giving it over to the hanhalah to run. What was his yachas to the hanhalah, and what was unique about his role in the yeshivah’s leadership?

The Rebbe did not take anything for himself. He was so happy to see the Rosh Yeshivah, Harav Yosef Mermelstein, shlita, was producing lomdim, and the mesivta was giving out ovdei Hashem. Since the outcome was as he wanted, nothing else mattered.

What were some of the principles that he set for how the yeshivah should be run — for example, derech halimud, seder hayom, approach to dealing with the bachurim, etc.?

In derech halimud he wanted clarity; the bachurim should come out really knowing the sugya.

As far as chinuch, he was extremely warm to the boys, full of ahavah, but if he saw something which he felt had to be fixed, he came out forcefully. If he felt the bachurim were too megushamdig, or if the Shabbos was not running like a Shabbos should be run, he would speak strongly and sharply about it. However, after the drashah, on a personal level, when speaking with the talmidim, he was soft, with a warmhearted demeanor, which allowed his words to be accepted.

What shiurim and shmuessen did he say regularly (in his more active years and which he held onto later)?

There were two parts to it. He would come every two or three weeks and say a shiur klali on the sugyos that were being learned; sometimes for the beis medrash and sometimes for the mesivta. In addition, on Friday he would say a shmuess on the parashah, where he would give over his hashkafos. He would often take out a yesod in Yiddishkeit from a Ramban.

Every year before Pesach, he would come to teach the Hagaddah to the ninth grade because he felt is was something special that is not so common. He explained it with the Rishonim, where each piece came from. Some pieces he explained hashkafadig. The last two years, I knew he had no koach and I didn’t remind him. He came to me with taanos why I didn’t remind him. He insisted that it happen, and he squeezed it in within the few days he had.

Before Shavuos, he taught Rus to the twelfth grade. He loved them to understand Torah Shebichsav also, to have a yediah in Nach, rattling off perakim baal peh.

He also had chaburos in his house with certain bachurim in various sefarim, such as Maharal or Tanya. For years, he loved having melaveh malkahs with the beis medrash bachurim, and it was a time when he told over sipurim of tzaddikim.

Did the Rebbe urge the talmidim to learn sifrei yirah, mussar or Chassidus? Which ones in particular?

For older bachurim he pushed Maharal a lot, because he felt it helps you understand the inyan. Concerning Chassidishe sefarim, it was a private thing. He would advise each bachur as he saw fit. He would ask what he was looking for, decide what he was a candidate for. Sometimes he recommended Reb Tzadok’s sefarim, but he did not have a specific mehalech; rather, he tailored it according to the individual.

The Rebbe’s own hasmadah, tefillos and yiras Shamayim were apparent to those who were privileged to know him. In what way did his presence in the yeshivah, and maybe even more so in camp, influence and inspire the bachurim?

It was tremendous. At times I told him that he had no idea how important it was that he was in camp. It was only the past few summers that he spent the whole summer in camp with the yeshivah. Otherwise, he would go to the city or even go away for a Shabbos if he had a kiddush or something else. He would say, “Vos hubben zei shoyn fuhn dos?” I would try to explain to him that just his mahus, his being there was uplifting for the bachurim. His coming into the beis medrash, his davening, his hishtapchus hanefesh by tefillah. In a simple way the boys were able to relate to it in a tangible way.

On Shabbos, he had a completely different tzurah. His learning on Shabbos showed a bachur how a Shabbos must look for a Yid. It showed what the Ramban and Sforno write that Hashem set aside a day for a person to detach himself from meaningless acts and attach himself to the Ribbono shel Olam. Seeing the Rebbe on Shabbos was a living model of this concept. His Shabbos was filled with learning and davening and nothing else; he would take a walk on Shabbos.

His Nishmas on Shabbos was a sight to see. He rarely showed any external tenuos by tefillah, so the maximum one could see was how he said Nishmas.

What was the Rebbe’s message to the bachurim when they left the yeshivah? What kind of kesher did the Rebbe maintain with talmidim after they left?

It was again very individual. The yungeleit returned to discuss many things with the Rebbe, whether it was where to send their children to yeshivah, how to upgrade and have a shleimus in shalom bayis, and the like.

He was very resolute about being a dmus for your children. When chassanim would come in for advice, he would take pride telling that his advice was one thing: Sing zemiros on Shabbos. “Oyb du vest fihren ah vareme shtub, vest du hubben nachas — if you will run a warm home, you will see nachas from your family.” If the house is cold, we don’t stand a chance in this generation. He urged them to daven in a shul where the davening was varm.

At the asifos with the parents, he would say what the chashivste word in the Yiddishe language [was]: Geshmak!

That’s why he was able to understand camp, which we had for eight weeks, not four weeks. He did it with seichel; there was an off Shabbos in middle, we had a sports program. He encouraged the boys to play and enjoy. He had nachas to see we were creating a Yiddishkeit where the boys were staying to learn and loving it! Although it was expensive, he said we should give another trip, zei lernen azoy shein.

The Rebbe loved the chazarah programs, and that the bachurim made siyumim on masechtos. By these siyumim, he shed copious tears and say, “Who would have believed 70 years ago that on admas America there would stand Yiddishe kinderlach and make siyumim on masechtos? Ribbono shel Olam, vos nuch vart ihr fuhn unz?” He said Kaddish, but you couldn’t hear the Kaddish as he burst out crying. Mind, you, the Rebbe was careful not to cry in public. Even when we went to daven with him on Hoshanah Rabbah, he was not a baal bechi.

The Rebbe saw several generations of talmidim pass through the yeshivah. As the times changed, were there adjustments that he made to his approach as to how the yeshivah should be run?

Truthfully, he felt it was the job of the yeshivah to work harder to bring out the same result, which was veromamtanu mikol haleshonos. He did not like compromises in Yiddishkeit. If the world is changing, we have to find a way to pull [it] up.

On several occasions, he told me that he could never thank me for the nachas that he had from the yeshivah.

In closing, I would like to point out that people should understand that although he was an eloquent speaker, every shmuess was devarim hayotzim min halev. He had a message from Hakadosh Baruch Hu, and it was bilti laHashem levado and the audience, be it 1,000 or 20,000, made no difference to him. He was so engrossed in what he was saying at the time, it was a time of avodah for him. It was the purity which had the hashpaah rather than the dynamism of the speaker.