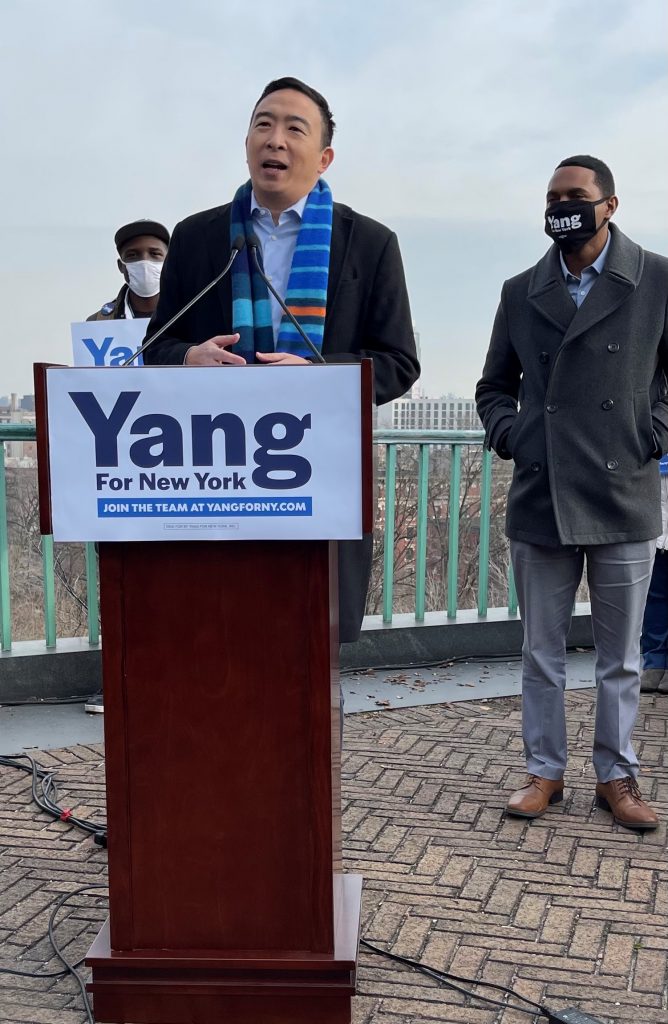 Andrew Yang, the entrepreneur who made waves during his unsuccessful 2020 presidential campaign by advocating for a universal basic income, kicked off his campaign Thursday for the 2021 Democratic primary in the New York City mayoral race.

“I’m running for mayor for a very simple reason: I see a crisis and believe that I can help,” Yang declared Thursday, before a crowd of his boisterous supporters in Morningside Heights.

Yang emphasized many of the unconventional economic ideas that gave him a following during the presidential race. “We need bold ideas and a fresh approach to revive our city,” Yang said.

If he won, he would “launch the largest basic income program on the history of the country right here in New York” and launch a city-wide People’s Bank “so they don’t have to turn to check-cashers or moneylenders.”

“We can make extreme poverty a thing of the past in New York City,” he said.

Yang stressed the need for a “human-centered economy” and a “COVID recovery plan that helps working people and not the stock market.”

The candidate also vowed to implement criminal justice reform to prevent more deaths in custody and work with the NYPD to bring down crime.

Yang, 46, who was born in Schenectady and moved to New York City 25 years ago, said that he would travel around the city on a bike or public transit, and would fight for the city, rather than the state, to have control over the subway and buses. The latter plan comes from Corey Johnson, the speaker of the City Council who was widely expected to run for mayor but withdrew, citing health issues.

“Andrew Yang is going to mean electric buses,” said Yang, vowing to implement a plan to convert the city’s public bus fleet to all-electric by 2030.

Yang has caused concern in the Jewish community by speaking against circumcision, but later clarified said that he was seeking to combat what he viewed as “misinformation” about the circumcision, but not actually restrict the practice.

When Yang, then a presidential candidate, was asked on Twitter in March of 2019 for his view on circumcision, he replied, “Against the practice.” In an interview the same month with the Daily Beast, the candidate said,“I’m highly aligned with the intactivists [anti-circumcision activists], and that “history will prove them even more correct.”

“From what I’ve seen, the evidence on it being a positive health choice for the infant is quite shaky,” Yang said in the Daily Beast interview, adding that he wants to “inform parents that it is entirely up to them whether their infant gets circumcised, and that there are costs and benefits either way,” and that “the more choice we give parents, and the more we diminish the possible preconceptions or misinformation various parents are receiving, then the better off we’ll be as a society.”

But when a reporter for Gotham Gazette tweeted at Yang last month that opposing circumcision “may not be helpful in a Democratic primary in New York City,” Yang replied,”I have attended multiple friends’ brises and felt privileged to do so. I believe in religious freedom. This is every parent’s personal decision and not a role of government.”

When asked by Hamodia at Thursday’s campaign kickoff, “Would you enact any policy against circumcision?” Yang replied simply, “No.”

The son of Taiwanese immigrants, Yang would be the city’s first Asian-American mayor.

Torres, a Bronx Democrat, praised Yang at Thursday’s event as “problem solver who is going to make our city work – not for political insiders but for all New Yorkers, especially the most vulnerable New Yorers.”

“Andrew is radically independent of a political establishment that has left far too many New Yorkers behind,” Torres told Hamodia. “Rather than do the same thing over and over again, I would rather support someone who’s going to bring an infusion of new energy and news ideas to new York City when it’s so desperately needed.”

Yang is the latest candidate in a crowded field of Democrats that include City Comptroller Scott Stringer and Brooklyn Borough President Eric Adams, who are considered the frontrunners; as well as former Maya Wiley, a former counsel to Mayor Bill de Blasio; and former Sanitation Commissioner Kathryn Garcia. The primary election will be held June 22.