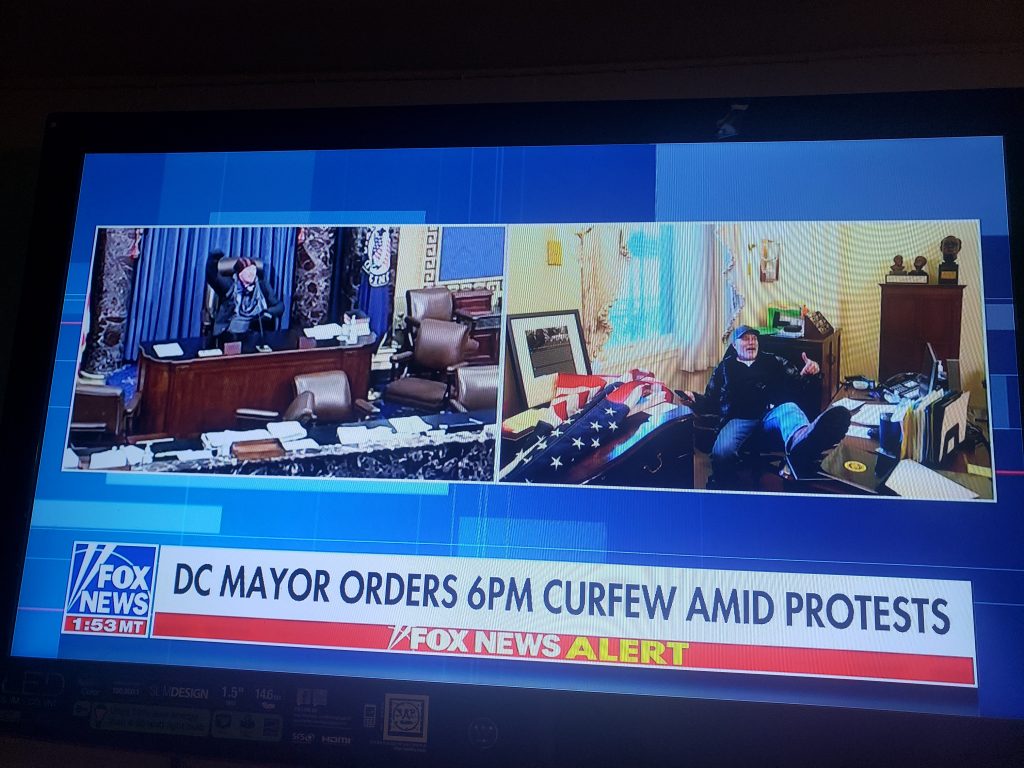 The U.S. Capitol was locked down for hours Wednesday, with lawmakers inside as violent clashes broke out between supporters of President Donald Trump and police, as Congress was in the midst of certifying the 2020 presidential election.

Around 2 p.m. Wednesday, protestors breached the barriers around the Capitol, overwhelmed the police and some entered the building. An announcement was played inside the Capitol as lawmakers were meeting and expected to vote to affirm Joe Biden’s victory. Due to an “external security threat,” no one could enter or exit the Capitol complex, the recording said.

Both chambers abruptly went into recess, and rioters soon breached the Senate chamber. It is unclear whether they breached the House chamber as well.

Images showed House members hiding under their chairs in the chamber.

Congress members eventually were taken into hiding in an undisclosed location.

Senators and Representatives were told to be prepared to put on gas masks, as both police and protesters had tear gas.

Rep. Veronic Escobar, D-Tex., tweeted video of protestors inside the Capitol, and said, “I’m currently sheltering in place. The Capitol building has been breached and both chambers are locked down. This is the chaos and lawlessness @realDonaldTrump has created.”

One woman was shot inside the U.S. Capitol, and later died. The woman’s identity, and the circumstances surrounding the shooting, were not immediately clear.

Protesters tore down metal barricades at the bottom of the Capitol’s steps and were met by officers in riot gear. Some tried to push past the officers who held shields and officers could be seen firing pepper spray into the crowd to keep them back. Some in the crowd were shouting “traitors” and cursing as officers tried to keep them back.

Images broadcast on CNN showed protestors smashing a glass window and climbing into the Capitol, and protestors climbing atop a scaffold and raising a Trump campaign flag and an American flag.

A suspicious package was also reported in the area, Capitol Police said.

Around 3:25 p.m., CNN reported that the Senate chamber had been cleared of protestors.

The skirmishes came shortly after Trump addressed thousands of his supporters at a rally near the White House ahead of Congress’s vote, claiming election fraud. The supporters then marched to the Capitol and broke in.

Trump tweeted in vain that protestors should remain peaceful.

“Please support our Capitol Police and Law Enforcement. They are truly on the side of our Country. Stay peaceful!” the president wrote. “I am asking for everyone at the U.S. Capitol to remain peaceful. No violence! Remember, WE are the Party of Law & Order – respect the Law and our great men and women in Blue. Thank you!”

Kayleigh McEnany, White House press secretary for the Trump administration, tweeted, “At President @realDonaldTrump’s direction, the National Guard is on the way along with other federal protective services.

“We reiterate President Trump’s call against violence and to remain peaceful.”

At 4:17 pm, President Trump released a short video which was filmed outside the White House, in which he stated:

I know your pain. I know you’re hurt. We had an election that was stolen from us – it was a landslide election, and everyone knows it, especially the other side.

It’s a very tough period of time. There’s never been a time like this, where such a thing happened, where they could take it away from all of us – from me, from you, from our country. This was a fraudulent election.

But we can’t play into the hands of these people. We have to have peace. So go home, we love you, you’re very special.

You’ve seen what happens, you’ve seen the way others are treated, that are so bad and so evil. I know how you feel. But go home, and go home in peace.

Shortly before 5:30 p.m., the Washington, D.C., police chief said at least five weapons have been recovered and at least 13 people have been arrested.

D.C. Mayor Muriel Bowser issued a 6 p.m. curfew, and the National Guard was called in to restore order.

Minutes before the curfew was to take effect, crowds of hundreds of people were still gathered near the Capitol, and police were using tear gas and percussion grenades to clear the crowd.

Around 5:50 p.m., an announcement saying “the Capitol is secure” rang out inside a secure location for House officials. Lawmakers applauded.

This was the first time the U.S. Capitol was breached since the British soldiers did so in 1814, during the War of 1812, CNN reported, citing a Capitol historian.

The extraordinary scenes made headlines around the world. U.K. Prime Minister Boris Johnson tweeted, “Disgraceful scenes in U.S. Congress. The United States stands for democracy around the world and it is now vital that there should be a peaceful and orderly transfer of power.”

Additional reporting by the Associated Press.