Community Schools Shut in NYC COVID Hotspots, Businesses May Be Next
CommunityCoronavirus 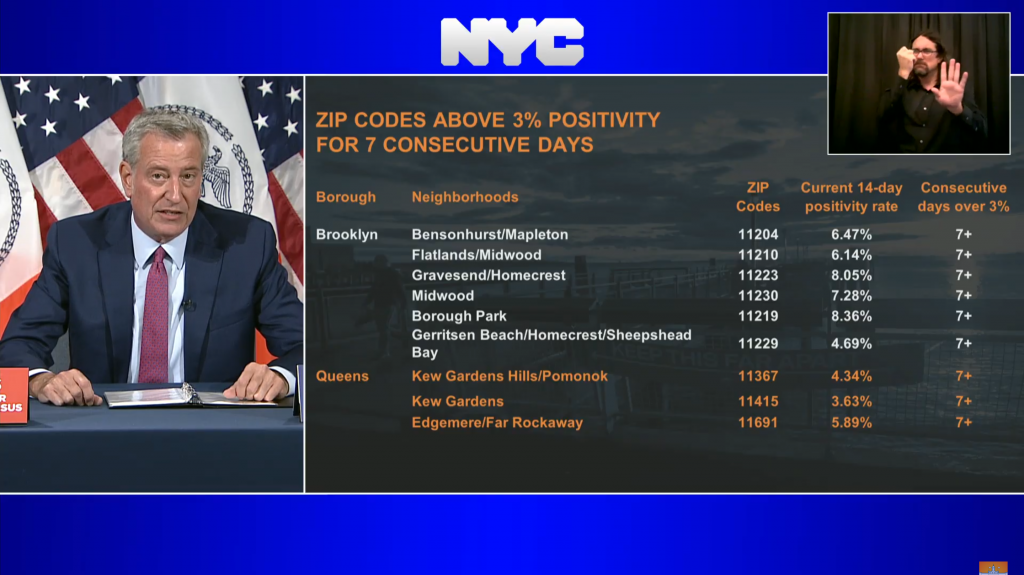 Schools will be closed in New York City areas experiencing a surge in COVID-19 starting Tuesday, Gov. Andrew Cuomo announced Monday, and warned that religious institutions may also be shuttered unless community leaders agree to enforce health guidelines. But the governor and Mayor Bill de Blasio appear to be at odds over whether non-essential businesses will be closed as well.

Cuomo’s announcement Monday morning came a day after New York City Mayor Bill de Blasio said he would request permission from the governor to close schools and nonessential businesses in these “Tier 1” zip codes for at least 14 days, and to enact limited business closures – to pools, gyms and indoor dining – in a dozen “Tier 2” zip codes experiencing a less-severe uptick. But Cuomo said Monday he will only close schools in the Tier 1 zip codes, and make no business closures, as he does not believe businesses are a significant cause of COVID spread.

However, at his own press conference Monday afternoon, de Blasio indicated that the business closures would indeed go ahead, more or less as planned.

“The proposal I put on the table” to Cuomo, said de Blasio, “is the basis of discussion, nine zip codes, close all non-essential businesses. The governor’s team [is] considering evasive alterations they want to make to that geography or to the approach, but until we hear otherwise, our plan is to move ahead Wednesday morning with enforcement in those nine ZIP of all non-essential businesses.”

De Blasio said that he would not be enacting the business closure without Cuomo’s approval, but that he expected Cuomo to ultimately agree to his plan in one form or another.

“The data is telling us very clearly, very loudly that it’s time to act,” de Blasio said. “So, we can’t put the final enforcement into place until the state has given us the sign off, but I fully expect the state to act quickly.”

“Until there is a different plan,” put forward by Cuomo, de Blasio said, “we are preparing to implement this plan … The state is reviewing [the city’s proposal] right now and might come back with modifications, but we’re going to be ready to move as early as Wednesday morning. If the state comes back with a modification, we’ll of course follow that modification.”

At his press conference Sunday, de Blasio had said he would not seek to close religious institutions. But on Monday, Cuomo said that he will be speaking with religious leaders Tuesday, and he will allow religious institutions to remain open only if they “agree to live and abide by the rules and advocate compliance.”

Cuomo also criticized local governments, including New York City’s, for what he deemed inadequate enforcement of COVID guidelines. He particularly condemned New York City’s policy of warning people without masks before fining them. Cuomo said the state will be taking over enforcement in hotspot clusters, but as the state does not have adequate personnel, the city will be responsible for providing personnel to the state task force that will be enforcing rules on social distancing and masks.

By comparison, the seven-day rolling average of positive tests for the entire city is 1.75 percent.

As the outbreak is largely in the Orthodox Jewish community, which would bear the brunt of the restrictions, some in the community criticized de Blasio for making his initial announcement on Sunday, during the Sukkos holiday, when Orthodox Jews don’t have access to media.

“Announcing this in the middle of a Jewish holiday,” tweeted Assemblyman Daniel Rosenthal of Queens, “shows City Hall’s incompetence and lack of sensitivity towards the Jewish Community.”

Asked Monday by a Hamodia reporter about the timing of the announcement, the mayor replied, “As I said yesterday during the press conference, I was sensitive to the fact that the community was in the middle of a holiday and I acknowledged that, but I had an obligation to the people of the whole city to announce this plan as soon as it was ready. We had to get to work immediately with conversations with the state. We had to give people a warning of what it would mean. All those parents thinking about their kids’ school schedules – they needed as much warning as possible. We needed to give a warning to the many, many people who live in the zip codes who were not observing the holidays and needed as much time as possible. And, obviously, made clear yesterday that we wanted to immediately get into conversations with community leaders last night, this morning, and ongoing, to keep working this through. But it was an urgent reality where it was imperative to get the word out as quickly as possible.”

During the governor’s press conference, Cuomo posted what purported to be a photo of a large Hasidic gathering violating social-distancing guidelines. The picture was actually from the funeral of the Satmar Rebbe the Beirach Moshe, zt”l, who passed away more than a decade ago. Cuomo said the picture was “from the past couple of weeks.”

After this Hamodia article calling attention to the erroneous use of the photo was tweeted by Newsday reporter Matthew Chayes, Cuomo senior advisor Rich Azzopardi replied that it “was a staff error that was caught in real time at the presser,” which was then “swapped out” with another photo that “was up during the last 10 minutes of the press conference.”