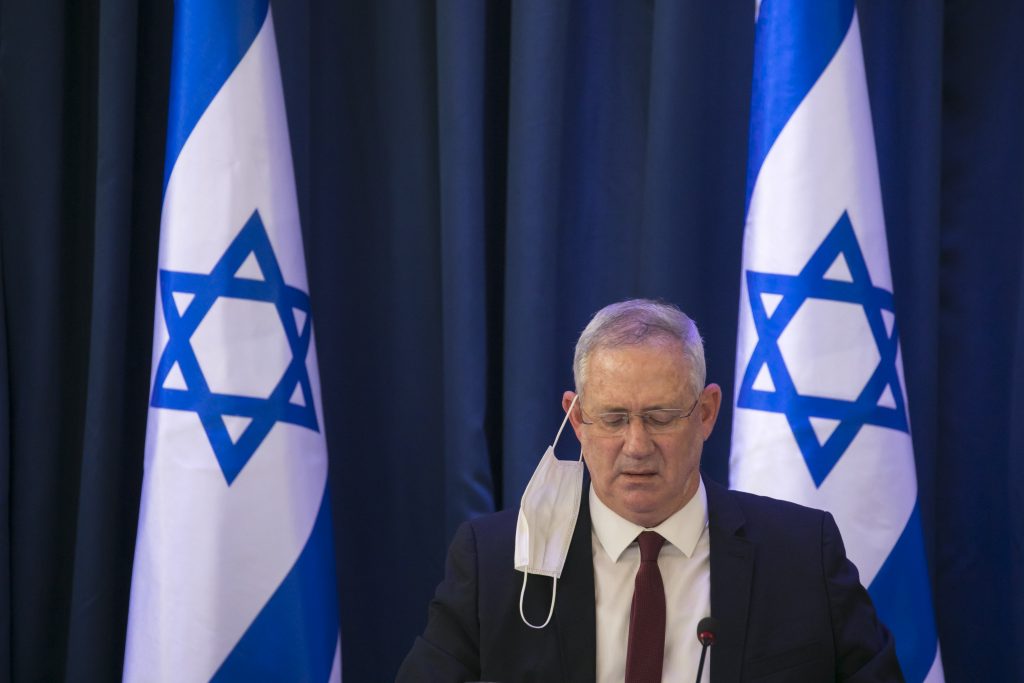 As the government struggles to turn back a second wave of the coronavirus, Defense Minister Benny Gantz proposed a restructuring of the official response.

“We must agree on a more efficient management of operations and decision-making,” he said at a Blue and White faction meeting on Monday, according to The Times of Israel.

“The regulation from top to bottom should be at the Health Ministry, and the implementation at the Defense Ministry and the Home Front Command, which has the best operational tools.”

In addition, Gantz urged that long-range planning should be undertaken, and that it was not possible to rely on week-to-week or even day-to-day policy decisions.

His remarks seemed to contain a political message, as well, as he said that “whatever isn’t connected to the battle against the coronavirus will wait for the days after the virus.”

Gantz and Foreign Minister Gabi Ashkenazi (Blue and White) have refused to go along with Israeli Prime Minister Binyamin Netanyahu‏‏’s proposal for immediate unilateral annexations in Yehudah and Shomron, according to media reports.

“July 1 is not a sacred date,” Gantz told U.S. Mideast envoy Avi Berkowitz on Monday, according to a source close to the defense minister. “Dealing with the coronavirus and its socioeconomic and health consequences is the more pressing issue that needs to be attended to right now.”

The emergency government, ostensibly agreed to in order to better fight the coronavirus, also calls for a July 1 starting date for the process of annexation. U.S. officials have reportedly said that administration approval of annexation will hinge on the Israeli leaders reaching an agreement among themselves on the proper method and timetable of annexation.

On the issue of long-range planning, Prof. Jonathan Gershoni from Tel Aviv University’s School of Molecular Cell Biology and Biotechnology, faulted the government for not taking advantage of the lockdowns to prepare for tackling a pandemic that epidemiologists says could be with us for another year or more. The decision to reopen schools without a testing system ready to go was an example, he said, of such lack of planning.

Although Netanyahu called for a more efficient testing regime on Sunday, the head of public health, Dr. Sigal Sadetsky, said that the labs are already overloaded.

Although the Health Ministry said it hired 300 new epidemiological trackers, the time it takes to complete each investigation has remained unchanged, up to five days, according to Ministry director-general Chezy Levy.

Hadar Marom, deputy director of Samson Assuta Ashdod University Hospital, told The Jerusalem Post that the government must attack mask-wearing the way it did with seat belts. She urged a massive promotional campaign to get people to wear masks.

“Remember we started to use seat belts while driving our cars?” she asked. “It was not easy to implement and people did not understand that they needed to use them.”

“Now we get inside our car and put on our seat belt,” she said. “It has to happen with masks, too.”

Regarding Gantz’s call for the Health Ministry to be setting regulations “from top to bottom,” it was not clear how that would happen. In recent days, the Coronavirus Cabinet has been divided on how to proceed, with Health Ministry officials advocating stronger precautions on one side, and on the other side the ministers of Finance, Interior and others insisting that sweeping restrictions must not be allowed to thwart economic recovery.