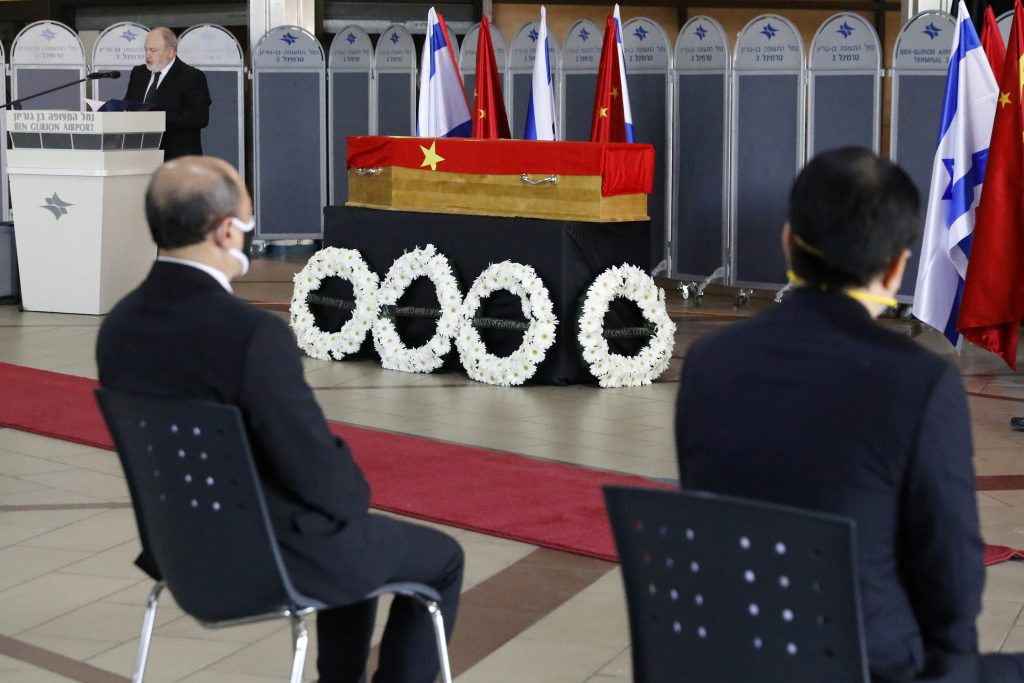 Israel bade farewell on Wednesday to China’s ambassador to the country who died earlier this week.

Diplomats held a short ceremony at Ben-Gurion Airport in honor of Du Wei before his body was flown back to China.

The 57-year-old ambassador, who was appointed envoy to Israel in February in the midst of the coronavirus pandemic, was found dead in his home north of the city of Tel Aviv on Sunday. He is believed to have died of natural causes.

“Who could have imagined that we would have to bid our farewell to Ambassador Du in such tragic circumstances,” said Yuval Rotem, director general of Israel’s Foreign Ministry, as a wooden casket draped in a Chinese flag lay nearby. “China and the world has lost a true diplomat.”

The ambassador previously served as China’s envoy to Ukraine. He was found dead at the ambassador’s official residence in Herzliya. He is survived by a wife and son, both of whom were not in Israel.

Israel enjoys good relations with China. Bilateral trade has grown in recent years, as have American concerns over Chinese investment, and concerns over spying on one of its key regional allies.

His death came just two days after he condemned comments by visiting U.S. Secretary of State Mike Pompeo, who denounced Chinese investments in Israel and accused China of hiding information about the coronavirus outbreak.

“His unfortunate passing is a devastating loss to China’s foreign service and all of us,” said his deputy, Dai Yuming. “During the past few days the embassy was overwhelmed with condolences and sympathies from the Israeli government, diplomatic corps and all walks of life in Israel. We will deeply remember all these kind words.”