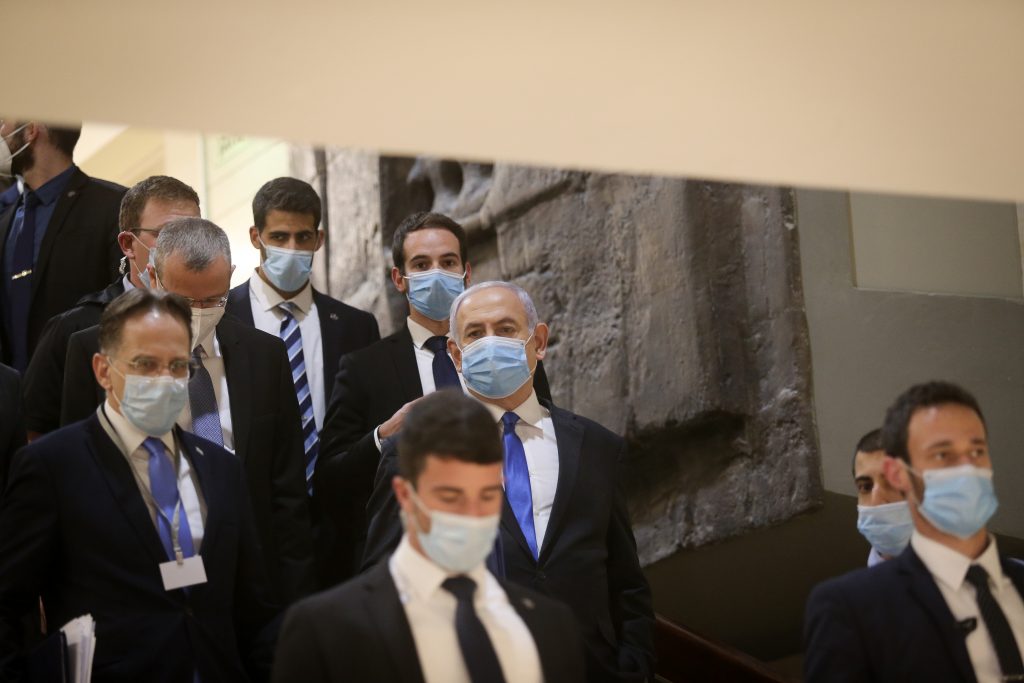 Prime Minister Binyamin Netanyahu presented his new unity government to the Knesset on Sunday, ending more than a year of political deadlock but still facing a trial starting in a week for alleged corruption.

His power-sharing agreement with Blue and White leader Benny Gantz, opens the way for Netanyahu to proceed toward a pledged de facto annexation of parts of Yehudah and Shomron. Under his accord with Gantz, after three inconclusive elections, Netanyahu will remain prime minister for 18 months before handing over to his new partner. The date for Gantz to become prime minister has been set for November 17, 2021, Netanyahu said in his speech.

Gantz, a former IDF chief of staff, will be Netanyahu’s defense minister and “alternate prime minister,” a new position that Netanyahu will hold when Gantz is in charge.

By assuming that “alternate” premiership once he hands over to Gantz, Netanyahu hopes to avoid having to resign from the government under legal rules that allow a prime minister to remain in office even if charged with a crime.

“The people wanted unity, and that is what it got,” Netanyahu told the Knesset, citing a desire to steer clear of a fourth election and the need for a national battle against the coronavirus crisis.

Gantz, in his address to the Knesset, said: “The biggest political crisis in Israel‘s history is over.”

With a new government in place, Netanyahu would be poised to proceed with his plan to extend Israeli sovereignty to Jewish communities in Yehudah and Shomron and the Jordan Valley, territory Palestinians seek for a state.

He has set July 1 as a starting point for Cabinet discussions on the issue, with no publicly stated deadline for approving de facto annexation of the land.

Gantz had cited the charges against Netanyahu in again pledging to his voters after the latest election in March that he would not serve in a government with Netanyahu. Angering many of his supporters and splitting his own party, he made a deal in the end, saying the coronavirus crisis made unity an imperative.

“The coronavirus crisis is an excuse to hold a corrupt celebration at the taxpayers’ expense,” new opposition leader Yair Lapid, who split from Gantz, said in parliament.

“You are establishing the biggest and most wasteful government in Israeli history.”

The Cabinet will have a record 36 ministers, with several new posts created to ensure both Netanyahu and Gantz could dole out Cabinet seats to loyalists.

Netanyahu said Sunday morning that Yoav Gallant, a former IDF general who currently serves as housing minister, will get the education portfolio in the new government. He will also be part of the Security Cabinet.

On the other hand, MK Gideon Sa’ar, seen as Netanyahu’s top rival, being the only MK to publicly challenge him in the last Likud leadership primaries in December, will not be a minister. “It is a great honor to serve the people and State of Israel as an MK,” he said Sunday.

In an about-face, Netanyahu said Sunday that Minister Yuval Steinitz will continue his position as energy minister. It was reported on Motzoei Shabbos that Steinitz would not be a minister in the new government.

“I’m glad to announce that Minister Yuval Steinitz will continue to be a key partner in the government in his role as energy minister. Minister Steinitz led the formulation of the gas plan and its implementation as part of Israel’s transformation into an energy superpower. He also promoted historical reform of the electricity sector,” Netanyahu wrote.

Some reports suggested that many of his former areas of authority have been stripped away to form a new Water Resources Ministry.

Ze’ev Elkin, the outgoing minister of Yerushalayim affairs and environmental protection, will serve in newly created positions of higher education minister and water resources minister — which will take the aforementioned responsibilities that had been under the Energy Ministry.

Elkin will be a member of the Security Cabinet, will coordinate Israel’s dealings with the International Criminal Court (ICC), and will continue to serve in several roles related to the country’s immigrants from the former Soviet Union.

The report came amid criticism over the size of the new government and the associated administrative costs.