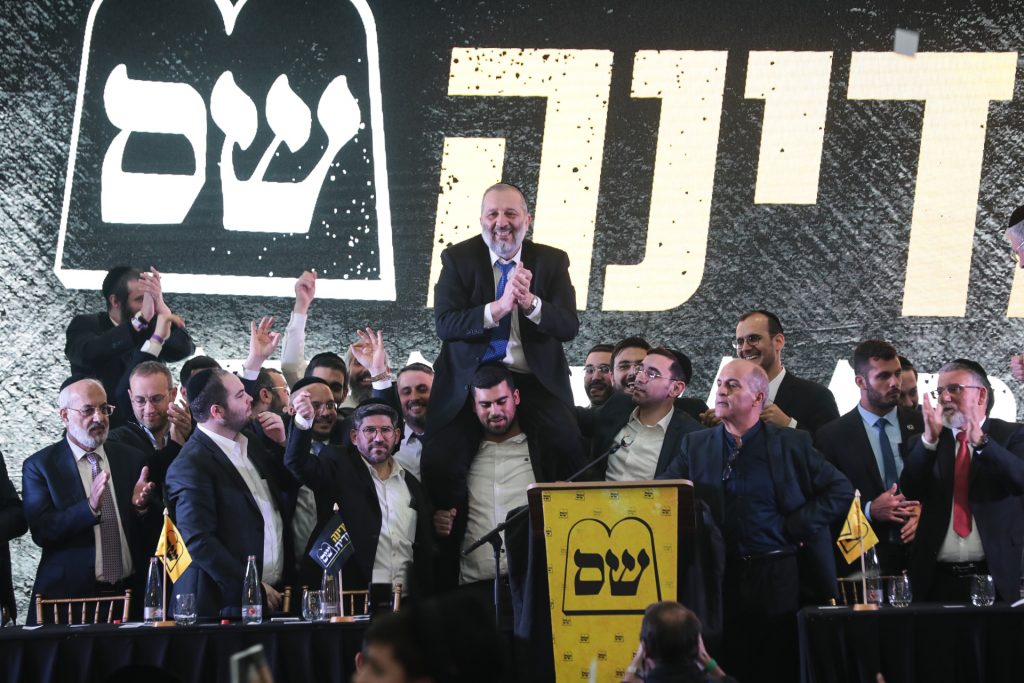 “From the data I received now, we’re close to the 61st seat,” Shas chairman Rabbi Aryeh Deri told reporters this afternoon. He did not give details.

Rabbi Deri’s assessment was at odds with that offered by Benny Gantz to reporters outside his home in Rosh Ha’ayin on Tuesday.

“The election results are coming in slowly and it is clear that Netanyahu doesn’t have 61 [seats] to form a government,” he said.

Although over 90 percent of the vote has been counted, some 400,000 – the equivalent of 8 seats in the Knesset – were still being tallied, according to Channel 12. The votes in question are made up of those from polling stations where irregularities were reported, and from IDF soldiers, prisoners, quarantined patients and diplomats.

The soldiers’ vote in particular has tended to go toward the right wing, which could augment the 59-60 seats so far received by Netanyahu’s bloc.

A spokesman for the Central Elections Committee says that the vote count won’t be updated until 5 a.m. Wednesday.

Meanwhile, coalition-building has already begun. While the Likud and right-religious parties have stayed together and have 59 seats, that would leave the PM short of a majority 61.

To make up the difference, they agreed not to rule out Yisrael Beytenu, according to Walla news. However, given the relentless anti-chareidi campaign carried on by the party leader Avigdor Liberman, it was difficult to see how it could happen.

United Torah Judaism MK Rabbi Moshe Gafni was quoted by The Times of Israel after a coalition meeting on Tuesday afternoon as saying that Liberman is “irresponsible.”

“Who is Liberman, anyway? he asked, mockingly.

Liberman, who appears to have 7 seats and once again could provide the needed majority, on Tuesday renewed his pledge to prevent fourth elections,

“As we promised voters, we will do everything to prevent fourth elections,” Liberman told reporters outside his home in Nokdim. “We intend to make a decision one way or the other.”

But since Liberman has ruled out sitting in a coalition with Netanyahu, speculation has focused on Likud efforts to entice an MK from one of the opposition parties to defect.

The Likud has set its sights on Gesher Party leader Orly Levy-Abecassis, according to KAN news. Her alliance with Labor and Meretz did poorly in the elections, garnering 7 seats, less than their combined total when they ran separately last time.

She said she wasn’t going over to the Netanyahu bloc.

Blue and White denied reports that Likud has been approaching their members.

MK Yair Lapid told reporters on Tuesday, “I will not enter a government under Netanyahu, and no one else on our list will enter such a government.”