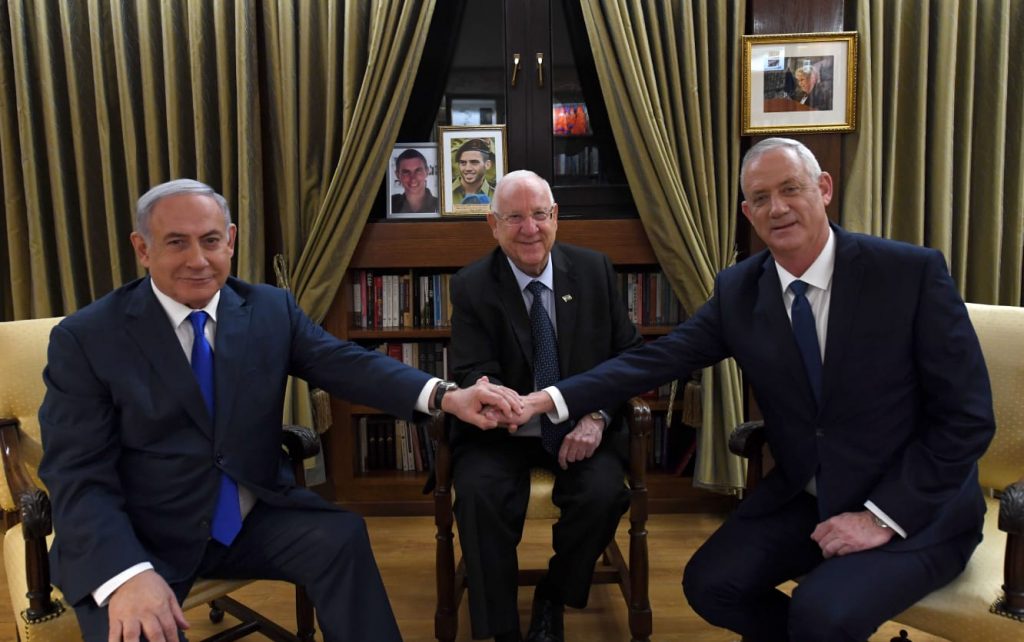 Rivlin, known to be a longtime foe of Netanyahu’s, clasped their hands in his for the camera, as they kicked off what all agree—at least publicly—should be swift negotiations toward a unity government led by their two parties.

At the outset, Rivlin “ordered” the two combatants to shake hands, according to Times of Israel. They did so, looking at the camera, but not at each other.

After an hour of tripartite discussion, Rivlin left Netanyahu and Gantz alone in the room to begin talking, presumably, about how they might share power in order to avoid a third election.

It also said that he had told Netanyahu and Gantz: “The responsibility for establishing a government falls on you, and the people expect you to find a solution and to prevent further elections, even if it comes at a personal and even ideological cost. This is not the time to exclude people,” he said.

The office said the two sides had agreed to not release information about their talks to the public at this point.

After two days of consultations with all the parties, Rivlin received recommendations for prime minister, giving Netanyahu 55 mandates, Gantz 54, neither with enough to form a majority of 61 for a governing coalition. In light of the inconclusive outcome, the president has been urging a unity government, and both party leaders have supported it in principle. However, as Gantz has said he would not sit with the prime minister while he faces likely indictment on corruption charges, nor with the chareidi parties, the path forward was far from clear.

Netanyahu cautioned Likud MKs in a closed-door meeting earlier on Monday that the current predicament could take months to resolve, The Jerusalem Post said.

During the meeting, the prime minister described a likely scenario, in which a unity government would prove unattainable, then he would be given first chance to form a coalition and fail, then Gantz would do the same, and finally Netanyahu would be given a second chance and succeed.

However, it was not at all a given that Netanyahu would be given the first chance. He has a one-vote edge over Gantz’s bloc, but Gantz’s party has two more MKs than Likud, 33 to 31. In addition, Gantz’s turn at coalition-making after Netanyahu failed in May was pre-empted when the latter engineered a dissolution of the Knesset before that could happen. It has been suggested that Gantz’s turn should therefore be next.

According to MKs present at the Likud meeting on Monday, Netanyahu’s assessment was that whoever gets the mandate third would be the one to form a government.

On Sunday, the President’s Residence director Harel Tubi told Army Radio that in the current situation, the discussions aren’t expected to yield a conclusive result, which will likely “give the president authority and discretion” to make a judgment call, Tubi said.

Rivlin will be “involved and will make every effort to prevent third elections. The law gives the president a very large room for judgment in such a case. He will know the facts and will demand clear answers. I think this time he will use the discussions to float other options, which the public hasn’t heard about.”

However, he declined to elaborate on what those options might be.

Tubi did, however, deny reports of a possible deal floated by Likud to pardon Netanyahu of any corruption charges he may be convicted of, in exchange for the premier’s resignation.

Tubi said such a scenario was precluded by the fact that the justice system functions independently of the President and that the topic would only be discussed in the future if Attorney General Avichai Mandelblit raises it. “We haven’t received any contact on that matter,” he said.

As the meeting concluded, President Rivlin’s spokesman told the press that there will no comment at this time.

Once their meeting was over, Netanyahu and Gantz said that the leaders of their parties’ negotiating teams would meet on Tuesday and that Rivlin had invited them to meet again on Wednesday evening at his residence.

The two party leaders thanked the president “for his important role at this time.”

Netanyahu subsequently updated the leaders of his nationalist camp by telephone, assuring them that he was acting on their behalf. “I am committed to what I promised you,” he said, according to media reports.