Israel Netanyahu to Annex Jordan Valley, Settlements in Yehudah and Shomron, If He Wins Election
Israel 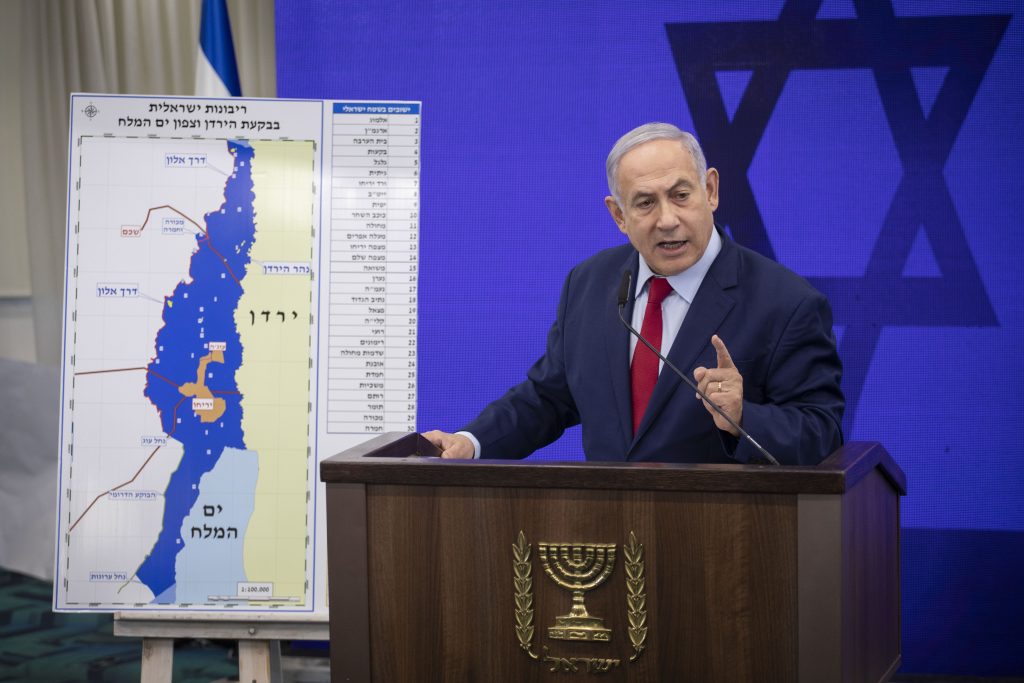 Prime Minister Binyamin Netanyahu promised on Tuesday evening to “place Israeli sovereignty” on all Jewish communities in Yehudah and Shomron.

Netanyahu stipulated that he’ll only do so “after the elections,” out of respect for the Trump administration and its forthcoming peace plan.

Then, in a direct pitch for votes, he said, “I want from you a clear mandate to place Israeli sovereignty on all the settlements.”

“This is a democracy. I won’t do anything without a clear mandate. So I’m asking for a mandate, to do this thing that enjoys a broad consensus, to define at long last Israel’s permanent borders, promising that Yehudah and Shomron don’t turn into Gaza. This map defines our eastern frontier. We haven’t had this kind of opportunity since the [1967] Six Day War, and may not have it against for another 50 years.”

Though the Trump administration has said it would not release its long-awaited peace plan until after the election, Netanyahu’s comments Tuesday evening, which had been billed as a “dramatic announcement,” implies that the plan allows Israel to annex the settlements in Yehudah and Shomron.

The statement had been preceded by a complaint from the opposition parties who accused the prime minister of using broadcast time for a campaign ad in the guise of news.

But Central Elections Committee chair Hanan Melcer rejected the petitions by Blue and White and the Democratic Camp to delay the broadcast. The expected announcement “has a clear news value, which naturally will draw broad media coverage and public attention,” Melcer said. “It does not constitute prohibited election advertising, and therefore there is no cause for issuing the requested order.”

Melcer said his decision is “based on statements from Likud and on the assumption that there won’t be Likud campaign literature alongside Netanyahu’s appearance. I am certain that Netanyahu and Likud are aware of the ramifications if it turns out these assurances given to me were inaccurate.”

Similarly, Blue and White Party leader Benny Gantz mocked Netanyahu as “in a word – spinner.” Gabi Ashkenazi of Blue and White responded with a sarcastic tweet: “Bibi, I suggest that you first annex the towns of the Gaza envelope,” which continue to be hit with Hamas rocket and incendiary attacks.

On the right, the reaction was somewhat different, but not entirely positive. Yamina Party chairman Ayelet Shaked urged the prime minister to pass a law to annex Yehudah and Shomron communities in three readings at the Knesset on Wednesday, instead of the law placing cameras at polling stations.

Her colleague, Yamina candidate Naftali Bennett, was dismissive: “I welcome Netanyahu’s string of promises, but these are just words. You can implement them immediately. I call on the prime minister to pass the ‘Jordan Valley Law’ by tomorrow in three readings, instead of the camera law pushed by Likud this week.

“[Former premier Menachem] Begin did it. He didn’t promise, he passed a law through all three [Knesset plenum] readings, in a single day, 14 December 1981.”

He noted a list of similar campaign promises Netanyahu has failed to implement in the past: “to build in Ma’ale Adumim and the E1 area [east of Yerushalayim] … a death penalty for terrorists … to destroy Hamas, after the elections it didn’t happen.”

He concluded, “Since I’m still convinced in the prime minister’s honest intentions, I commit to make sure that all the lawmakers of Yamina will show up in any place and at any time to ensure the immediate passage of the Jordan Valley Law” annexing the area.

Minutes before Netanyahu went on the air, Jordan Valley Council President David Al-Hayani revealed the message the prime minister was about to give, and thanked him.

“After 11 years of serving [as council head], which were filled with fear for the future of the Valley, this is one of the most important and exciting moments I have experienced,” Elhayani is quoted as saying.

“I thank Prime Minister Netanyahu from the depths of my soul for transforming this time into a historic moment for Israel. Let us not forget how he stood strong in the face of the Obama administration’s pressure to surrender the Jordan Valley — and in his first opportunity, Netanyahu now shows his leadership, determination and courage as a statesman and true patriot, fulfilling the dream of the Valley’s residents, and of most of Israel’s citizens.”

He added: “To the cynics who say this was for the election, don’t worry about them.”

After Netanyahu’s speech, Foreign Minister Yisrael Katz (Likud) welcomed the news, saying, “I am convinced that the American government, the friendliest to Israel, has always supported this course, following the recognition of Jerusalem as Israel’s capital and Israeli sovereignty at the Golan Heights.

“Now, the Israeli voter will be required to choose between those who fortify and defend the secure borders of the State of Israel, and those who support the delivery of territories and the removal of hundreds of thousands of Jews from their homes and land.”

The Trump administration sounded more restrained: “There is no change in United States policy at this time. We will release our Vision for Peace after the Israeli election and work to determine the best path forward to bring long sought security, opportunity and stability to the region,” Times of Israel quoted an unnamed official as saying.

A source described by the Times as “familiar with the Trump administration’s thinking” said the White House was briefed ahead of the announcement does not think it precludes the possibility of a political settlement in the future.

Meanwhile, the United Nations warned that Israeli annexation of the Jordan Valley would have no “international legal effect.”

“The secretary-general’s position has always been clear: unilateral actions are not helpful in the peace process,” UN spokesman Stephane Dujarric said according to AFP.

“Such a prospect would be devastating to the potential of reviving negotiations, regional peace, and the very essence of a two-state solution,” he added.