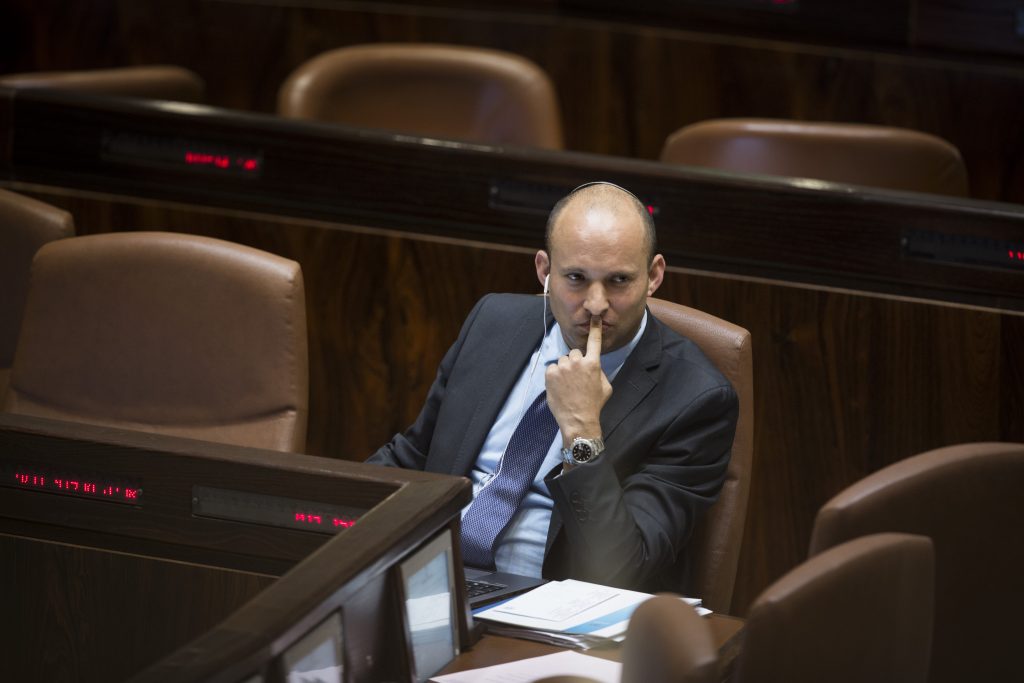 Ayelet Shaked, chairman of the New Right, will lead a joint slate of the right-wing parties, United Right leader Rabbi Rafi Peretz announced on Sunday evening, bringing to an end to weeks of tense negotiations.

“We are happy to announce that I spoke with Ayelet Shaked a few minutes ago, and we agreed that out of national responsibility and concern for the right-wing government and religious Zionism, she will head the Union of the Right-Wing Parties,” he said.

Shaked will head the ticket, as Rabbi Peretz steps down to the No. 2 spot, National Union leader Betzalel Smotrich to No. 3, Naftali Bennett No. 4, and the remaining places on the list to be finalized in a meeting between Rabbi Peretz and Shaked later on Sunday.

Earlier in the day, the New Right’s No. 2, Naftali Bennett, briefed reporters ahead of the planned next meeting with the United Right, defining the proposed alliance as a “technical bloc” to maximize votes in the September election, not a merging of the parties.

“In the Knesset we will operate as an independent faction,” said Bennett in a live stream video. “A unity deal is a bus to the Knesset, once we pass that checkpoint we will get off the bus.”

New Right would likely recommend Prime Minister Binyamin Netanyahu to form the next government, he said, but it would not allow a third round of elections if he does not succeed in forming a coalition this time.

Netanyahu was pressing Rabbi Peretz to make recommending him for prime minister after the elections a condition of the electoral alliance with the New Right party, according to media reports.

The technical bloc Bennett has in mind would also include Moshe Feiglin’s quasi-libertarian Zehut party and the extremist Otzma Yehudit. “We decided to unite everyone, all the parties on the right, including Feiglin, to bring them under one umbrella,” Bennett said.

Otzma Yehudit leader Itamar Ben Gvir said that Netanyahu is doing everything he can to persuade the other parties to run on the same list with it, despite strong ideological differences.

Ben Gvir pointed the finger at Transportation Minister Bezalel Smotrich, accusing him of trying to block Otzma Yehdit from joining the alliance.

“Bezalel’s plan was to keep us small and then in the end come and tell me to take another unrealistic spot [on the electoral slate], like they did the previous time,” he told Ynet.

“The prime minister is doing everything in his power to create tie-ups. He is the responsible grownup on the ground, Smotrich a little less,” Ben Gvir added.

Addressing the matter of running with the far-right Otzmah, Bennett said there was no other way.

“Yes, you’ll bring in people who you don’t entirely agree with, but we need a big right wing bloc, only that will stop the establishment of a left-wing government,” said Bennett.

“Otzmah is with us, yes, they are part of the unity deal, I do not share their opinions, but what can you do, there is diversity [on the right wing] and in elections only Knesset seats are important as they allow you to implement your values.”
Leaders of both parties had expressed hopes of wrapping up the negotiations on Thursday night, but leadership issues were not so easily disposed of, and talks resume on Sunday evening.

Bennett blamed the failure to reach agreement to “delays on their side,” reportedly over reluctance to cede the No. 1 spot on the joint slate to New Right leader Ayelet Shaked.

There was no immediately available explanation for the party’s strong showing in the polls, considering that it failed to make the electoral threshold in the April elections.