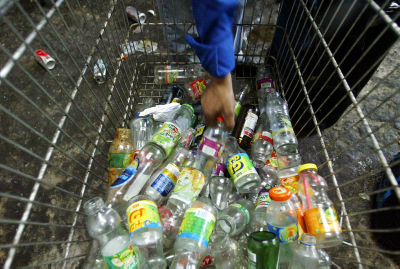 Israel is among the leading countries in recycling bottles, both plastic and glass. There are over 23,000 bottle recycling bins spread throughout the country, with 600 new ones added in 2018 alone. Out of a total of 990 million bottles that were sold in 2018, some 770 million were recycled – nearly 80% of the total. The Environment Ministry, which issued a report on the matter, said that recycling efforts had more than met the goals set out at the beginning of the year.

Israel leads recycling efforts in plastic bottles in both the United States and Europe. Israelis recycled 59.9% of PET (polyethylene terephthalate)-based plastic bottles in 2017, while the recycling rate in the U.S. was 29.6%. The average in Europe is 58.2%. With that, Israel has a way to go to achieve the same rate as the European champion – Germany, where 90% of PET bottles are recycled.

According to Ministry statistics, over 12 billion bottles have been recycled by Israelis over the past 15 years. The Israeli recycling law, passed in 2010, mandates a recycling rate of 55% per year.