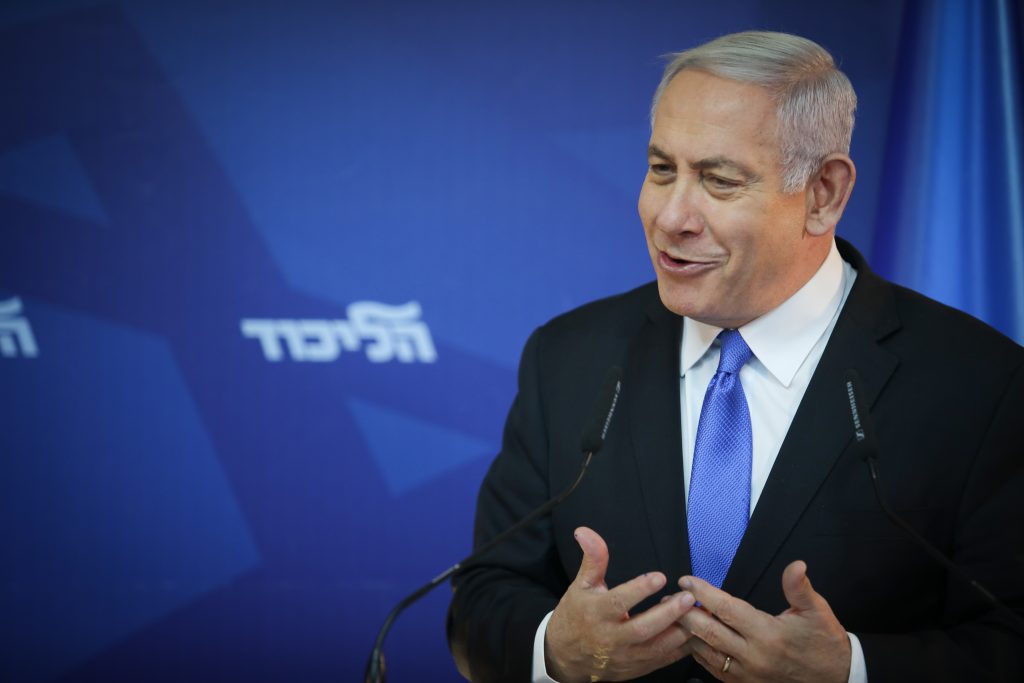 Responding to an investigation by Yediot Acharonot and the New York Times that purported to reveal a large network of fake social media accounts supporting him is more “fake news” and another bald-faced attempt to defame him, Prime Minister Binyamin Netanyahu said. “Every day there is a new blood libel against me, and today they outdid themselves. At first I thought it was an April Fool’s joke, but then I realized they were serious,” Netanyahu said.

“This bot issue is just a blood libel, brought to you by Yediot, the ‘house newspaper’ of Benny Gantz and Yair Lapid,” Netanyahu said at a special press conference Monday afternoon, as he responded to the report. “They are running the most libelous campaign against me that was ever conducted in Israel. We already filed a complaint with police about this. They keep libeling me, day after day, but it will not help them – because you, Israeli citizens, the million that voted for us, are not ‘bots,’” Netanyahu said.

The report was based on work by Israeli researchers Noam Rotem and Yuval Adam, founders of the Big Bots Project, which examines fake news online. According to the researchers, one specific account, known as “Bond,” is at the center of the network – generating messages that are immediately retweeted and redistributed by other members of the network. The activity in the accounts rises and falls with the news cycle – so, for example, when the news broke several weeks ago that there were suspicions that Iranians had hacked Benny Gantz’s cellphone, activity in the accounts shot up, with negative messages about Gantz’s capabilities as a leader spread far and wide. The network also does mass retweets of messages by senior Likud officials, the report said.

However, supporters of Netanyahu said that the two were not objective; Rotem, wrote journalist Ariel Kahana in a social media post, “is known for ‘objective’ studies like this, which serve the left.” Thousands of social media posts from Netanyahu supporters appeared on social media, with many showing messages and images, adding that they were “bots” as well.

After the report was publicized Monday morning, Blue and White held a press conference accusing Netanyahu of attempting to “steal the election” with the fake posts. “The report shows that Netanyahu is running a campaign of ‘info-terror’ against Israelis. Israelis in recent months have been exposed to fake news because Netanyahu will stop at nothing – lies, manipulation and more,” said party head Benny Gantz. His partner Yair Lapid said that the campaign “shows that Netanyahu knows he is going to lose the election, so he is trying to steal them. He is using this campaign to defame the former IDF Chief of Staff, one of the most modest and honest people that I have ever known.”

In its own response, the Likud said earlier Monday that while the large number of social media posts were real, they were generated not by automatic message bots – but by real people. “The Likud does not automatically retweet messages using bots, avatars, phony profiles and the like. In fact, the Likud is nearly the only party that does not use these tactics,” the Likud said. At his press conference, Netanyahu said that “the media lies to you daily, they call the right-wing Israelis names, and their newest name is ‘bots.’ Next week you have the opportunity to show them what you think of them, and what you think of all the progress we have made in Israel. That is the answer to the blood libel of the bots.”

Appearing along with Netanyahu were two supporters whom Netanyahu introduced as “Captain George” and Giora. Speaking after Netanyahu, Giora said, “I think we got a great gift today from Yediot, because the entire story has been collapsing throughout the day as the dozens of people who have been going on interviews are presenting themselves as real people who support the prime minister. They are not bots. We have many supporters who want to see Israel continue to succeed. If anyone is a bot here, it is Gantz, who automatically jumped on this fake story and spread it around. On April 9th, we, ‘the bots,’ will make our choice.”