An IDF soldier was killed in a double shooting and stabbing attack that took place at several locations in Yehudah and Shomron on Sunday morning.

Later in the afternoon, the IDF announced that the soldier killed in the stabbing attack was 19-year-old Staff Sergeant Gal Kaidan of Be’er Sheva, Hy”d.

Kaidan was raised from the rank of Sergeant to Staff Sergeant after his death. His levayah is scheduled for Monday at 11:00 in the military cemetery in Be’er Sheva. The family has asked for no media coverage. 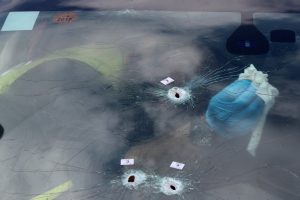 The incident began when a Palestinian stabbed an Israeli soldier at an intersection near the entrance to Ariel and grabbed his assault rifle, IDF spokesman Lieutenant-Colonel Jonathan Conricus said on a conference call with journalists.

The terrorist used the weapon to fire at three vehicles, hitting a civilian and then hijacking a car, which he drove to the nearby Gitay Avisar Junction, where he fired at Israelis and wounded several of them.

Kaidan was pronounced dead shortly after the attack.

One of the wounded, 19, is in serious condition with an injury in the stomach/back. He was being operated on shortly after the attack. The other wounded, 47, is in critical condition with wounds to his head, and is fighting for his life.

The terrorists fled the scene of the attack, and massive forces, including a helicopter, were deployed to capture the terrorists.

The Shomron Regional Council together with the defense establishment decided to close the gates of the Barkan industrial zone, as well as all those at the entrance to Israeli communities in the area, as the manhunt continues.

One soldier was wounded in the village of Brukhin as a result of the exchange of fire with the terrorists.

The Hamas terror group, which rules the Gaza Strip, praised the attack as a “natural response to crimes committed by the Israeli occupation.”