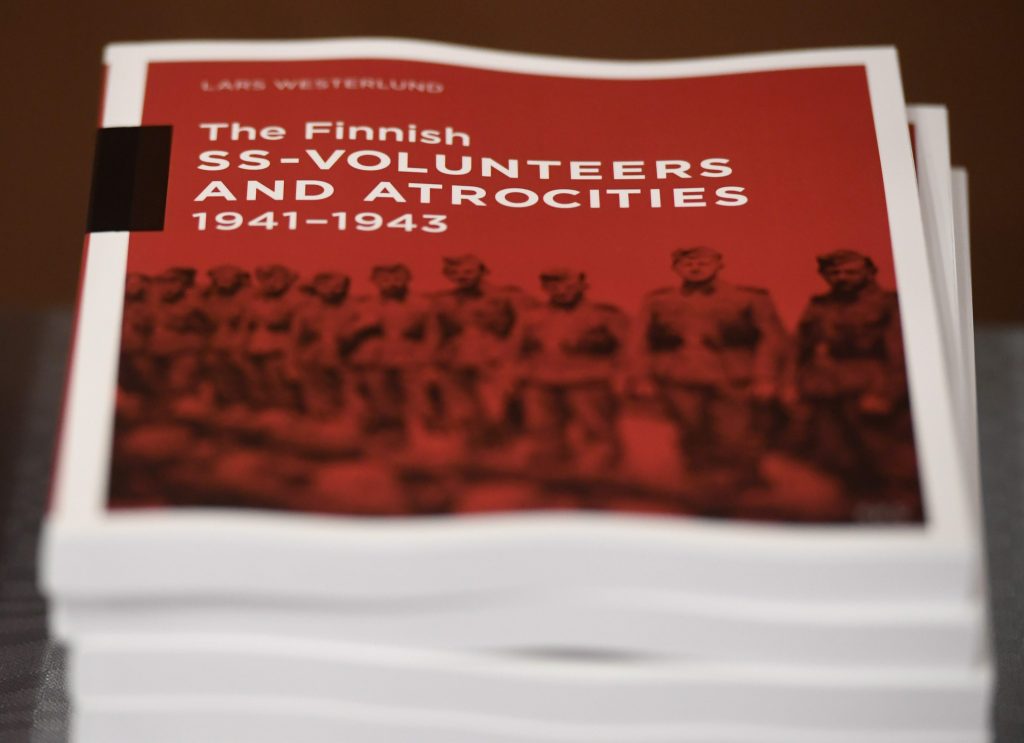 A Holocaust historian on Sunday praised Finnish authorities for publishing a report concluding that the country’s volunteer battalion, which served with Nazi Germany’s Waffen-SS, took part in atrocities during World War II, including participating in the mass murder of Jews.

Efraim Zuroff of the Simon Wiesenthal Center lauded the determination of the National Archives of Finland to release its findings, even if it was “painful and uncomfortable” for Finland. He called it an “example of unique and exemplary civic courage.”

The independent 248-page investigative report in English — commissioned by the Finnish government and released Friday — said 1,408 Finnish volunteers served within the SS Panzer Division Wiking during 1941-43, most of them aged between 17 and 20 years old.

“It is very likely that they [Finnish volunteers] participated in the killing of Jews, other civilians and prisoners of war as part of the German SS troops,” said Jussi Nuorteva, director general of the National Archives.

A significant part of the study’s material is based on diaries kept by 76 of the Finnish SS volunteers.

Finland was invaded by Moscow in November in 1939 in what became known the Finnish-Soviet Winter War. Battles lasted until March 1940, when Finland, overwhelmed and outnumbered by Soviet troops, agreed to a bitter peace treaty, losing several territories but maintaining its independence.

Isolated from the rest of Europe and afraid of another Soviet attack, the small Nordic country entered into an alliance with Nazi Germany, receiving weapons and other material help from Berlin.

As a part of the pact, Nazi SS chief Heinrich Himmler insisted that the Finns dispatch soldiers to the SS Wiking division similar to the volunteers it demanded from Nazi-occupied Belgium, Denmark, the Netherlands, Norway and elsewhere.

Reluctantly, Finns complied and covertly recruited the first group of 400 SS volunteers to be sent for training. The vast majority of them had no ideological sympathies with the Nazi regime, the report said.

“At the beginning of the attack [on the Soviet Union], Finns were unaware of the Germans’ goal of eradicating the Jews,” Nuorteva said. “Finns were, above all, interested in fighting against the Soviet Union” due to their brutal experiences in the Winter War and the nearby threat from Moscow.

In this way, “the starting point for Finns’ involvement was different compared to most other countries joining SS foreign volunteers,” he said.

When Nazi Germany invaded the Soviet Union in June 1941 under Operation Barbarossa, Finnish regular army troops fought independently alongside Wehrmacht soldiers on the northeastern front. They were not under Nazi command.

The Finnish SS volunteers with the SS Wiking division operated on the Eastern Front until 1943, entering deep into Ukraine.

The leading Finnish military historians who undertook the probe into the country’s wartime role wrote that those Finnish troops likely witnessed shootings and other atrocities against Jews and other civilians by advancing Nazi troops.

The volunteers returned to Finland in mid-1943, following the Finnish government’s decision as it sensed the tide of the war had turned against the Germans. Many of the SS volunteers then served in the Finnish military until the end of the war.

A copy of Friday’s report was given to Paula Lehtomaki, a state secretary with the Finnish government, who said it was an valuable contribution to existing research “on difficult and significant historical events” in Finland’s complex World War II history.

“We share the responsibility for ensuring that such atrocities will never be repeated,” said Lehtomaki.