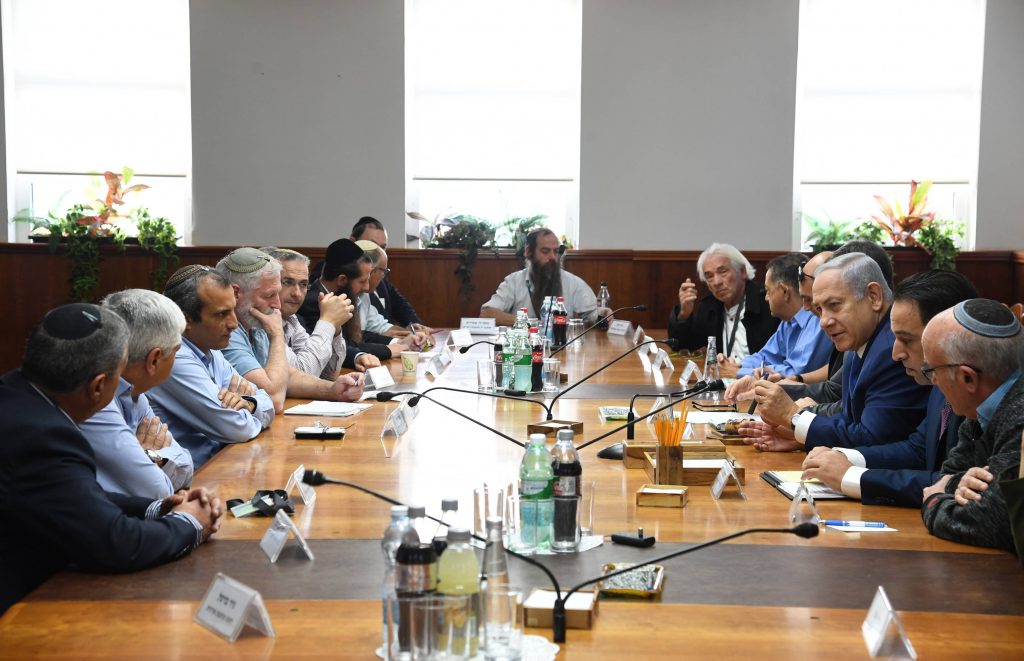 Israeli Prime Minister Binyamin Netanyahu told leaders from Yehudah and Shomron on Wednesday that the outcome of the April elections will determine the future of their region.

While the Prime Minister’s Office released a six-line statement saying only that he had met with local council heads who “thanked Prime Minister Netanyahu for his actions in strengthening settlement and also discussed advancing other issues,” media reports described it in terms of a campaign speech to rally the troops.

“In the upcoming elections, we will see an effort by the Left to accomplish an ‘electoral revolution,’ with the aid of the media and other forces,” Netanyahu was quoted as saying. “They are entirely invested in this effort. But they cannot succeed — if they do, it will put the settlement movement in grave danger.”

“We must win the upcoming election,” the prime minister said. “This is a battle over our home. The fate of the state and the settlements is not self-evident.”

“We also have hard work to do with the current U.S. administration in order to continue to bring about the great achievements we have brought to the settlements,” Netanyahu added. “This is not guaranteed, because later on, under a leftist government, everything could be reversed in a moment.”

However, it appeared that Netanyahu will still have “hard work to do” with voters in Yehudah and Shomron.

While the YESHA Council officially gave its support to Netanyahu, some regional leaders were not willing.

Jordan Valley Regional Council head David Elhiyani said at the meeting: “During the elections we have to say the truth, the settlements are flourishing and that is because of you.”

But he felt compelled to note the absence of three leaders who boycotted the meeting.

He said that he was ashamed of those who chose not to come to the meeting, according to The Jerusalem Post. “There is open communication between you and the settler leaders,” he said, and that there was no reason not to participate in the meeting.

In a letter to Netanyahu, they wrote: “During our meetings with the Prime Minister and representatives of his office, we made a number of requests including the [restoration] of 400 million shekels ($106 million) in planned security spending cuts in Yehudah and Shomron, the return of IDF forces which had been removed from the area, the return of security checkpoints, and a Zionist response to the terror attacks by [expanding] settlement [in Judea and Samaria].”

“To our great disappointment, however, the vast majority of our requests were dismissed or ignored.”