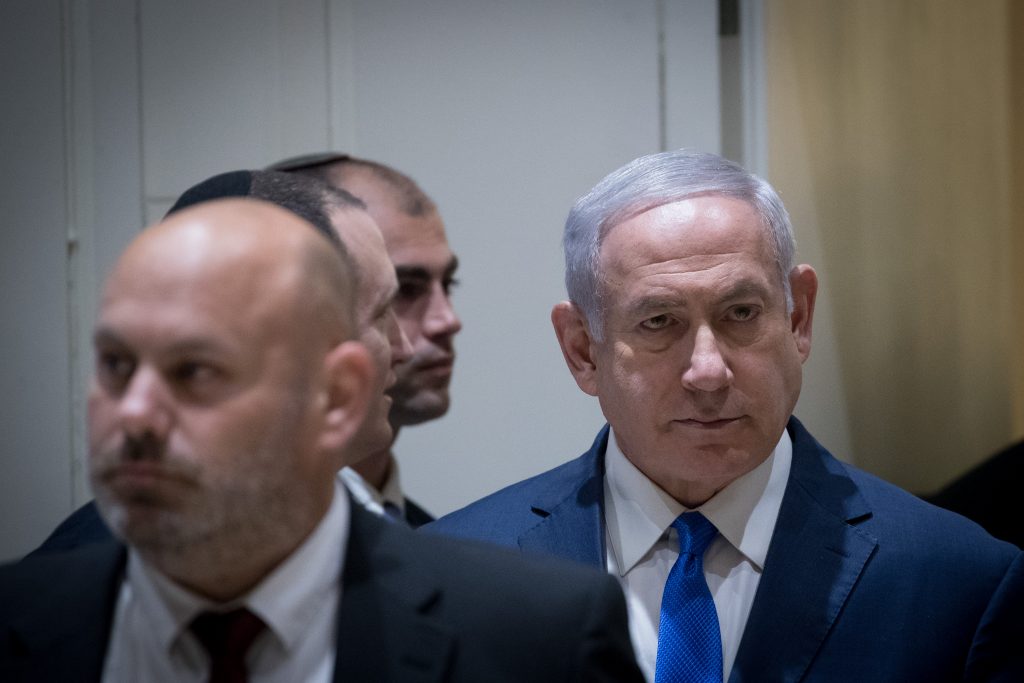 The issue of Israeli Prime Minister Binyamin Netanyahu’s continuing in office while police recommendations for indictments against him on corruption charges erupted again on Sunday; opposition leaders redoubled the attack and Likud ministers sought to defend the prime minister.

After news broke of police recommendations to indict PM Netanyahu in Case 4000 on allegations of “bribery fraud and breach of trust,” opposition leaders lined up to pummel Netanyahu yet again and demand his resignation.

Opposition chairperson Tzipi Livni (Zionist Camp) declared that “Netanyahu has to go before he destroys law enforcement bodies to save his own skin. The Israeli nation deserves clean leadership.”

She and Zionist Camp faction chairman MK Yoel Hasson both called for elections to be called at once.

“Netanyahu, your time is up,” Hasson wrote in a tweet. “Israel must hold elections, not in November [as scheduled] nor in May, but immediately. Binyamin Netanyahu, who is neck-deep in investigations and suspicions, must resign today and not even run in the upcoming elections.”

Yesh Atid chairman Yair Lapid called on the Likud to remove PM Netanyahu from the premiership until new elections could be held.

“This is a sad day, sad for all Israeli citizens… as well as for all those who have known Netanyahu for dozens of years like myself and others, and saw the process of corruption caused by too many years in power,” Lapid said in a statement.

In the same vein, Tamar Zandberg, head of the Meretz party, said: “A third bribery recommendation leaves no room for doubt. A prime minister suspected of the most grave offense in the Israeli lawbook for public officials cannot sit another single day on his seat. Netanyahu should resign today and Israel should go to elections immediately.”

Investigators said that Netanyahu advanced regulatory decisions benefiting Shaul Elovitch, the controlling shareholder in Bezeq— despite opposition from the Communication Ministry — in exchange for positive coverage from Elovitch’s Walla news site. At the time, the prime minister was also serving as acting communications minister.

Culture Minister Miri Regev led off his defense on Sunday with a volley aimed at outgoing Police Commissioner Roni Alsheich, whom she accused of carrying out a smear campaign against the prime minister.

“Police Commissioner Alsheich is still doing everything he can to ensure that the door will slam as hard as possible when he leaves the job,” she said. “After trying to sabotage the appointments of those recommended for the post of police commissioner, he’s still looking for headlines.”

Regev’s comments echoed Netanyahu’s own earlier statements accusing Alshich and his investigatory team of conducting a “witch hunt” against him and his family.

Continuing her attack on Alsheich, she said: “On the day he took office, Alsheich promised that the Israel Police would cease publishing recommendations regarding investigations, and on the day he left, he proves that his word is worthless — not only did he not keep his promise, he is doing exactly the opposite.”

As to the allegations, Regev said: “I trust the prime minister and his wife. They are honest people who only care about the best interests of the State of Israel and its citizens. The time has come to stop hanging elected officials in the city square.”

MK Miki Zohar told Army Radio that “police are continuing to cross all the lines. Alsheich wanted to give Netanyahu a parting gift,” alleging that the outgoing police commissioner “severely pressured Lahav 433,” the police’s anti-fraud squad, to recommend an indictment.

Coalition whip David Amsalem observed sarcastically: “What’s most surprising is the perfect timing!”, referring to the fragile state of the coalition, such that additional police indictment recommendations could force early elections.

Social Equality Minister Gila Gamliel also stood up for PM Netanyahu: “I’ve known the prime minister for 20 years. He isn’t corrupt and the only thing guiding him is the benefit of the state. I’m sure the attorney general won’t accept [the recommendation].”